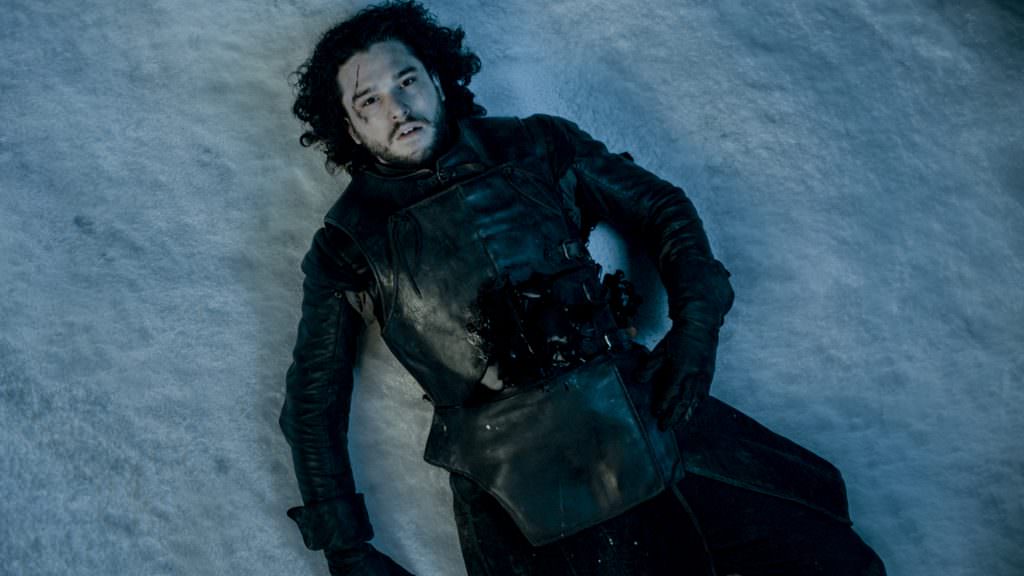 Hands up for everyone who saw the Red Queen revealing herself to be a very, very old woman coming. Right.

Okay, before we get to that bizarre piece of business, let's mull the opening shot of Game of Thrones season six premiere, "The Red Queen," which confirmed that Jon Snow is, at least for right now, very, sincerely dead. The long shot of his corpse in the snow (all that blood!) seemed to beg for some twitch of his leg or gasp for breath, but there was none of that. He's dead. He's so dead, in fact, that we see him lying there presumably hours later, after his only remaining friends in the Night's Watch, including the ever estimable Davos, discuss what to do about his murder while said murderers, lead by Thorne, are surely going to turn their attention to this small band of allies.

Here's what I love about Davos; he's practical. He makes decisions based on identifiable logic. He doesn't have the elán Tyrion, the show's real chess master, and he certainly doesn't have the palace intrigue market cornered, like the former Master of Whisperers, Varys, but he's a proper realist and a clear thinker on a show that's got dragons and the Red Queen and the House of Black and White and all the rest. Here's Davos to his small, motley crew of Jon Snow supporters, who are all itching for immediate revenge, which will be suicide; let's sit tight to think this through, but in the meantime, go grab Jon's direwolf, Ghost. They accept this counsel from Davos, even though they don't have to, because they, too, understand the man seems to know what he's doing.

So yes, Jon Snow is dead. For now. Yes, Kit Harington was spotted filming scenes for season six, so his return still feels assured, but we now know Jon Snow was very much killed in last season's finale, and whatever form he takes this season will technically make him something else entirely.

Now, turning towards the episode's end for a moment, let's look at another piece of wisdom from Davos. After buying his crew some time by pretending he's considering Thorne's offer of safe passage out of Castle Black (a lie—Davos and the men rightly guess that if Thorne was willing to murder the Lord's Commander, he'd surely kill them, too) and with Ghost now in there with them, Davos suggests they have one more weapon at their disposal—the Red Queen. It's not for nothing that this episode was named after her. Davos assures his skeptical men—"What can one red head do?"—that the Red Queen is actually the real deal. "You haven't seen her do what I've seen her do," he tells them. And sure enough, we see her do something spectacular—she morphs from the beautiful woman we have known into an ancient one after removing her necklace. What the hell, right?

So the theories that are circulating now are that Melisandre has always been this old, possibly immortal, and her younger, beautiful form is just part of her power. This theory ties in that necklace as the thing that keeps her in her younger skin (although many people have already pointed out that she's taken that necklace off before and remained young). Although have we seen her remove the necklace while alone? Hmm. There will also likely be people who think that Melisandre has somehow "gifted" her remaining years to the dead Jon Snow, and that will reanimate him. Unlikely, but a fine theory as far as theories for the reanimation of a dead fictional character go. The idea that she's immortal and/or really old, and the young, beautiful Red Queen is what she presents to the world in order to bend it to her will seems more likely at the moment.

Now when we catch up with Melisandre in season 6, she's already pretty down on herself, and seeing a dead Jon Snow seems to push her over some edge. "I saw him in the flames, fighting at Winterfell," she says, horrified that, once again, the flames seem to have lied to her. And thus, her appearance at the show's end as an old woman could be interpreted as the final waning of her powers. The once mighty Red Queen, who could whisper men into action and have children burned at the stake is now just an old woman, weakened by her continually bad advice. Maybe. But I still think Melisandre is going to be the key to Jon Snow's fate, or, his post-life fate. And Davos seems to agree with me.

For the episode's most thrilling moment, we once again turn our lonely eyes to Brienne of Tarth. Finally this proud knight has gotten a chance to protect a Stark girl and shown what she can do. What a scene that was! Poor, shivering Sansa and reduced, bedeviled Theon are surrounded by Ramsay Bolton's soldiers, their lives over, when who comes riding to the rescue but Brienne and her big, swinging sword and the lovable Podrick! It was fantastic. It was also a great little moment when Sansa has forgotten some of the words to officially make Brienne her defender, and Podrick has to help her through it. With Brienne and Podrick on her side, Sansa might actually survive this escape, and help lead the revolt against the awful Bolton's we're all desperately waiting for.

Meanwhile, down in Dorne…Ellaria Sand and the Sand Snakes are a stab-happy group of femme fatales. Sweet lord I wouldn't want to get on their bad side. They dispatch Areo Hotah, Doran Martell, and Trystane Martell lickety-split. Between Ellaria and the Sand Snakes, Brienne and Melisandre, this first episode was about powerful women exerting their powers in one form or another. "Your son is weak like you, and weak men will never rule Dorne again," Ellaria seethes to Doran as he lies there, dying. Tough stuff. And between Davos and Ellaria, there's a lot of quick, concise game planning going on here to start the season. A lot of movement. Sansa's on the run,  Ellaria's mid-coup, Davos is plotting a last ditch effort to avenge Jon Snow, and over in King's Landing, Jamie has definitely got his groove back and is ready to murder the world.

That's right, Cersei once again has to bury a child, only now, in a twist that really surprised me, she's not breathing fire and ready to reduce the world to ash, she's resigned to her fate as the mother of corpses and feels like it's all her fault. This character, such a potent force for five seasons, has been given new shades since she was threatened, out maneuvered and humiliated in season five. Now, the one child she believed was truly good has been killed, and it seems like Cersei's just about had it. She recalls to Jamie that, after their mother died (you really can forget from time to time these two lovers are also siblings) she couldn't stop thinking about her body decomposing underground, and now she'll be doing that for her lovely daughter. Jamie's not having it, nor is he having any of her talk about the prophecies of three of her children dying and how it's all her fault. "Fuck prophecy. Fuck fate. Fuck everyone who isn't us." Despite having lost his sword hand, Jamie seems to be the Jamie of old, ready to defend his sister/lover at all costs, and regain everything he's lost. Except that hand.

The other two big plot threads in "The Red Queen" involved Daenerys and Arya. For the latter, things continue to be bleak, or, more to the point, blind. Arya's still sporting those milky, unseeing eyes, and to make matters even worse, she's reduced to begging on the street and catching a daily beat down from the Waif. And Daenerys is on the wrong end of cruel irony as the once slave-freeing queen is a slave herself, being whipped and baited by her Dothraki captors and in the custody of Khal Moro. The mother of dragons is hauled before Moro and treated like a piece of meat. Moro promises he'll rape her, but Daenerys reveals that she's the widow of Khal Drogo and saves herself that particular fate. But what she's won is the forced, permanent residence in the temple of the Dosh Khaleen, where all the widowed Khaleesi must live. Brutal.

You just knew Ser Jorah was going to find Dany's ring on the ground. Come on. In all that grass? For some reason this is the thing that I can't except. The dragons and spells and mayhem and murder, fine, but the second Dany dropped the ring at the end of last season as a bread crumb, you knew Jorah was going to find it, despite the possibility of doing so, without magic, is about nil. I just don't care for it. Also, poor dude's only got, what, a week or so left until he's a full stone man, right?

Why did Davos look at Jon Snow's blood in the snow as if he saw something more than just a blood stain in snow? Hmm….