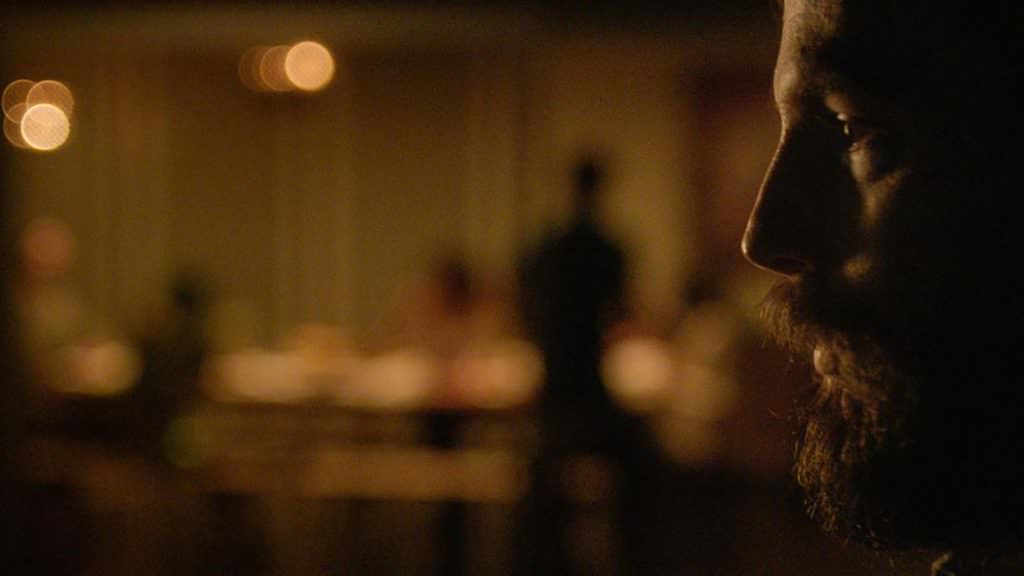 Director Karyn Kusama on the Quietly Sinister The Invitation

Despite her early success with Girlfight (and later Aeon Flux and Jennifer’s Body), it’s been nearly eight years since Karyn Kusama has directed a film, preferring instead to work in television, directing episodes of shows as varied as AMC’s Halt and Catch Fire and Hulu’s Casual. Thankfully, the filmmaker has ended her cinematic drought with The Invitation, a quietly brewing chamber piece bearing the mark of an exacting auteur that’s part Who’s Afraid of Virginia Woolf, part House of the Devil.

The Invitation centers around a dinner party, one serving as a reunion for old friends and ex-lovers Will and Eden, recovering from the loss of their child years earlier. Both Will (Logan Marshall-Green) and Eden (Tammy Blanchard) have reportedly moved on from their trauma, but the party oozes with an awkward and ultimately sinister presence that extends beyond the hauntings of past misfortune. What follows is a tense ensemble film, one whose careful construction supports a plot that holds its cards until the last possible second, before exploding into cutting violence and hurtling towards its shocking conclusion.

The Credits had a chance to talk to Karyn Kusama ahead of The Invitation’s release to learn more about the film’s serendipitous casting, its careful balance of genre, and the rest of the details on orchestrating a film that redefines the phrase “dinner party from hell.”

I want to hear a little about the script because I know it was something that your husband, Phil Hay, and his writing partner, Matt Manfredi, actually penned initially. If you could tell me about what struck you about it and maybe how it changed from what was on the paper to what you ended up with on screen.

Well, I mean, what struck me about it was always its, I want to say, its precision and its purposefulness. It was very clear to me on the page that movie had a really strong sense of discipline and it didn’t give away too much information too quickly, it just had a really nice sense of mystery. And just really kind of well-thought out characters. I felt like I could see how a lot of these characters would sort of feel like real people once they were onscreen. And for me, I think, probably one of the things I wanted to amplify the most, it was already in the script, but I wanted to amplify it more, was the emotional components between the characters. The sense that Will is so tortured by his own grief and grappling with a lack of being able to just be present at the party and in the moment because he’s in such a painful state of being.

The ensemble is maybe one of the most interesting things about this movie, in that usually in horror when you begin with an ensemble, by the second act and the third act that ensemble is usually quite pared down, but everyone stays together for so long in this film. How did you go about casting a refreshingly diverse cast that also could sort of sustain their relationship and their tensions over the course of essentially a whole film?

Yes, it was important to me that the characters feel like fresh faces, like people that we might actually meet at a party. And so, even though there were moments in different iterations of the movie, trying to get it made, where we definitely were faced with the question of casting very recognizable, well-known stars, we were very lucky in a way, to finally get the opportunity to just cast the best actors and cast really serious actors who are very good at their craft. And so, it allowed for us to kind of start to just look at those faces and think about how they all would feel on the screen together and we were really lucky because as we were casting, we discovered that many of the cast members actually already knew each other by working with each other before. So it created this sense, say between Mark Doyle and Logan Marshall-Green, who play Tommy and Will respectively, that they were actually old friends and really knew each other well. Jordi Vilasuso, who played Miguel, had already worked with Tammy Blanchard, who played Eden, and so had John Carroll Lynch and so had Mark Doyle. So there was the sense that there were these shared histories with everybody, and that just felt like some kind of weird spooky good luck. Because I couldn’t have expected it to happen that way and I’m so glad it did because the chemistry around the cast is so important. And a lot of the faces, even though they are more well-known than others, they are a lot of actors that are not yet household names and that ended up becoming I hope a kind of strength to the film. 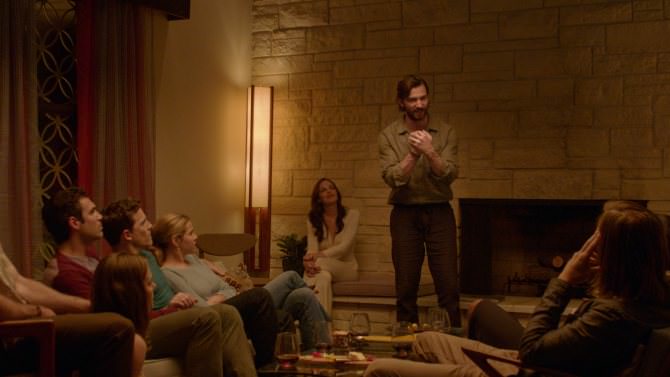 In regards to the space, this film is a chamber piece in a lot of ways. So, how was it to finding that house and how was it establishing very clear geography of the space?

It was a combination of things. I knew that we were looking for a sort of warmth, a sense of history from the house. We looked at a lot of extraordinary houses, but a lot of times what a modern house that signifies wealth and status today is a lot of glass, and there was something about this house that just had a kind of deceptive warmth because after a while it could feel pretty claustrophobic in there. And to me, that’s really what made the house stand out. Even though it was probably a little bit smaller than what we wanted, we just made it work and made the most of those small spaces.

What kind of prep work did you do to get to know the house?

Once we had the house, we prepped the entire time in the house so that we could really know its every nook and cranny and understand how we would want to utilize every space and sort of reveal every space because it was important, as you mentioned, that there was a sense of spatial coherence to the movie. And I knew that, one, I was going to be in this house for the whole time, and two, I didn’t want to put the audience in the place of not understanding the space, I wanted them to have a sense of where they were. We used our rehearsal period, once we had prepped the film in the house, we used our rehearsal time with the actors to really rehearse every single scene of the movie in the house. To really sort of understand where all the actors were moving and how they were motivated to get up and make themselves a drink or go use the bathroom, anything that happens in a real-life nighttime event like this one, we were just trying to find the logic of the evening and the shape of it. That really helped us understand the space as well, once we could put all of our actors in the space. 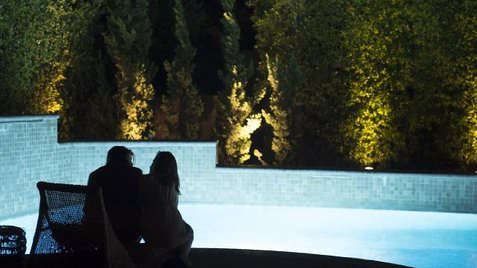 I know that you’ve tossed around The Celebration as a big influence, but in visual terms, it’s a very unique film especially for the genre, what were the cinematic touchstones on the visual side?

I mean, I probably, I would say that there were a couple of films that I was really drawn to when thinking of this movie, Klute, the Alan Pakula film with Jane Fonda was definitely something I talked about a lot with my DP, Bobby Shore. We just talked about how beautifully Gordon Willis handled darkness, he utilized darkness to create a sense of disease even when things are purportedly fine and safe, I love Philip Kaufman’s version of The Invasion of the Body Snatchers from 1978, because it had just such a rich use of color and kind of painted a portrait of San Francisco that’s very beautiful but also uncanny. And, I mean, it’s interesting, another Pakula film, The Parallax View was another really important one for me. I’m glad you feel like it’s a distinctive visual vocabulary, because I wasn’t consciously going for that, but I was hoping that the film worked in this way where you couldn’t identify it as a genre film for a long time, if ever because it had its own logic, if that makes sense. So I’m happy to hear that you felt like it had something distinctive about it.

Absolutely, in fact, when I was watching  it, there was a point in time in which I wasn’t sure if we weren’t just so in Will’s head that like everything was fine and there was no other shoe to drop, that everything would be okay! But I think one of the big boons to that is also the music and the sound design. It’s so atmospheric, but manages to not be too ominous.

That was a really important challenge to the film, was creating a real sense of unease and mood and a kind of heightened sense of attunement to the sounds of the film but also a sense that maybe this was sort of the inside of Will’s head might sound like. So it was interesting to find that balance between that paranoia and that sort of soundscape of more, I want to say traditional genre films and to find something that was operating on a similar level. I talk a lot to my composer, Teddy Shapiro, who I’ve worked with before on three other films, and we talked a lot about the notion of atonal expressions that are a bit challenging or off-putting and then finding more traditionally satisfying emotional beats, moments in the score. Particularly when it came to Will and his sense of loss about his child. So we played with how far we could push the strangeness in both the sound and the music to sort of let the audience know that all was not going to stay comfortable for very long.

So, before I let you go, I have to ask. What can you tell me about XX because that’s a project I am so excited for!

Oh, wow, well thank you! So it’s an anthology of short films in the horror genre, and it’s all female filmmakers and I just finished my section this summer. It’s sort of a speculative reimagining of the demon possession story, that’s totally inspired by things like Rosemary’s Baby, and it’s sort of just imagining a single mom and her teenage boy who seems to be pretty afflicted with dark thoughts. And it’s just about the horror of having a kid you don’t feel you know anymore.

Well, that is so exciting, I love hearing your name and Rosemary’s Baby in the same sentence. Thank you so much!