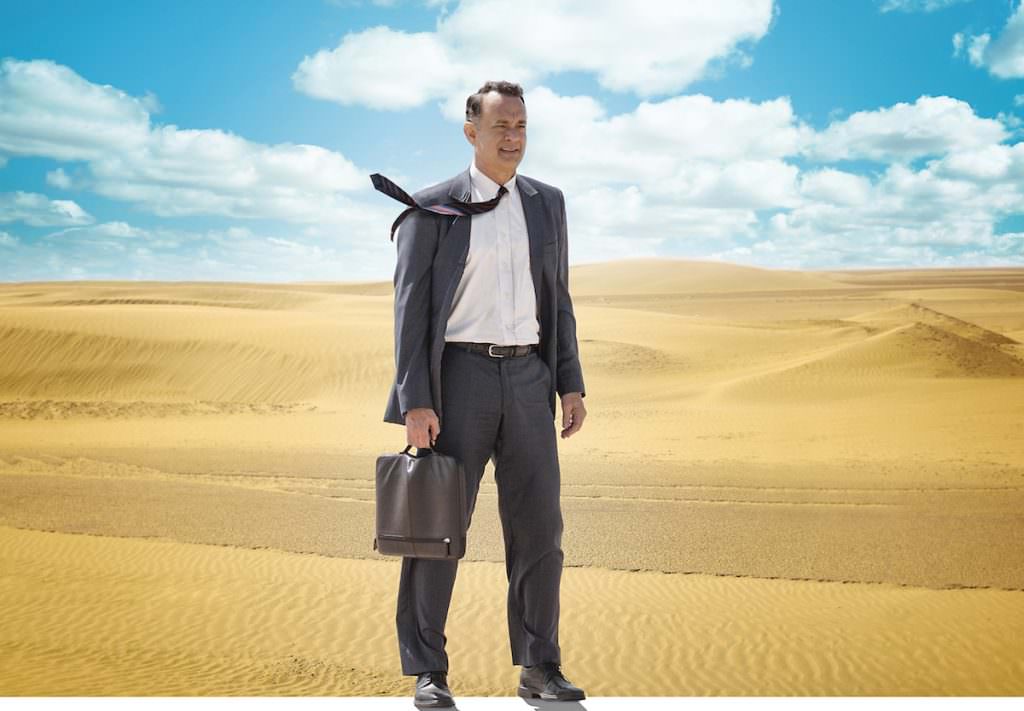 In A Hologram for the King, Tom Hanks' American businessman Alan Clay visits an eerily deserted "city of the future" eager to firm up his appointment with the King of Saudi Arabia. Instead, he learns only that a meeting might happen at some vague point in the future. "It's a very strong image to see Tom in his black suit standing there in the middle of the desert," says Hologram writer-director Tom Tykwer. "Nobody's waiting for him, nobody's going to meet him. He's really at the end of his rope."

The German filmmaker met a similar reception when he tried to nail down permission to shoot his movie on location at King Abdullah’s Economic City. Tykwer says, "In the west, we want clear answers:  yes, no, when? That's not exactly the way it works in Saudi Arabia. "It's a 'maybe' 'possibly and "let's see" world.

Before writing his screenplay adaptation, Tykwer mimicked the journey that writer Dave Eggers fictionalized in his original "A Hologram for the King" novel. Tykwer booked the same hotel room in the city of Jeddah, rode north into the desert with the same taxi driver and toured the same half-built Utopia that protagonist Alan Clay experiences on screen. But his due diligence failed to charm Saudi officials. The government forbid Tykwer to film actors and limited his camera crew to a few wide shots.

Forced to relocate production, Tykwer wound up conjuring Saudi Arabia's ghost city 3200 miles west in Morocco. "I felt like we didn't need to do a literal reproduction as long as the spirit of the culture was being represented with the right tone," Tykwer says. "The Saudi people I know who have seen the film feel it's pretty accurate, even though many things are re-constructed, re-designed or re-invented. In a way, being able to create our own version of reality was liberating."

Liberating but daunting. In southern Morocco, filmmakers spent months in a remote stretch of the Sahara desert that had never seen movie cameras or roads, much less Hollywood stars. Beset with sand storms and flooding caused by the region's first serious rainfall in 25 years, Tykwer and his team built their own monument to Saudi-style excess in the middle of nowhere.

First, production designer Uli Hanisch supervised the construction of an enormous black tent inhabited by techie characters waiting to present a hologram-based teleconference system. Then, visual effects artists went to work. "In Rabat and Casablanca, we found buildings that that we digitally removed and placed with CGI into this completely empty desert," Tykwer explains. Half-built skyscrapers found their way into the film when the VFX team inserted shots of a Casablanca construction site into the background.

Filmmakers digitally re-purposed Morocco's largest mosque to serve as foundation for the so-called "Welcome Center." "We cut off the mosque's roof top, took away two or three elements attached to it and redesigned the place," Tykwer says.

While CGI-generated architecture proved invaluable for A Hologram for the King, which co-stars Sarita Shoudhury, Tykwer shot on 35 millimeter film rather than digital to underscore his fondness for analog production. "We felt like Alan Clay is this analog character who once sold tangible things like bicycles," says Tykwer. We didn't want to put Tom in a car in front of a green screen in a studio. We wanted to have the car pulled through the Sahara for real so Tom's character feels the sand and sun that you'd experience in this place."

The scorching locations did little to dampen Hanks' enthusiasm, says Tykwer, who earlier worked with the two-time Oscar winner on Cloud Atlas. Hanks performed take after take in 100 degree heat wearing suit and tie without complaint, "Tom should basically should be given a second credit of, I don't know, production uplifter," Tykwer laughs. "He's a real trouper bringing positive energy to situations where you had every reason to be depressed, like when you can't shoot because of sand storms. In fact, Tom was psyched to work under the most absurd circumstances. For a director, that's paradise."

TAGSA Hologram for the King