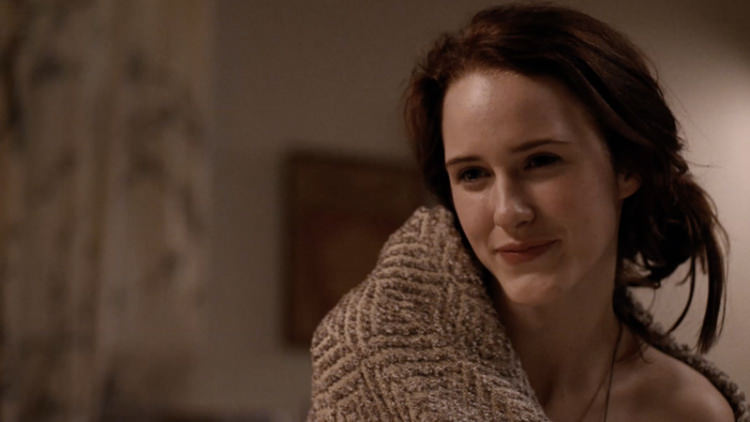 Actress Rachel Brosnahan on Louder Than Bombs & House of Cards

Actress Rachel Brosnahan has been steadily building an admirable career on screens both large and small. While entertainment aficionados probably know her best as Rachel Posner, a young prostitute at the center of a political scandal in House of Cards on Netflix, Brosnahan now plays another principal figure in Manhattan on WGN America, and continues to showcase her talent in a variety of independent and studio films. On April 8, she will appear as part of a distinguished ensemble—Gabriel Byrne, Jesse Eisenberg, Amy Ryan, Isabelle Huppert and David Strathairn—in the family drama Louder than Bombs, from Norwegian filmmaker Joachim Trier. Brosnahan spoke with The Credits about her new film, her Emmy-nominated turn on House of Cards, and staying true to herself in Hollywood. Following is an edited version of the interview.

In Louder than Bombs, you play Erin. Tell us about your character.

I’m in a largely supporting role in this movie, but Erin is an ex-girlfriend of Jesse’s character. We rediscover each other under extraordinary circumstances for both of us. We meet in a hospital as my mother is dying of cancer and he’s just had a baby…They dated in college, they had a strange relationship filled with insecurity, and they meet up later in their lives when they’re in completely different positions and become a source of relief for each other for a very brief moment.”

How familiar were you with Joachim Trier’s work, and were there any particular creative challenges stemming from the fact that this was his English-language debut?

Not at all. I mean I would never have known that coming on set then. I wasn’t incredibly familiar with his work, but they had sent me his previous two films that had been very well received abroad, and a lot of my filmmaker friends had already seen them. He’s a stunning filmmaker and all of his movies are electric and take their time and beautifully explore a lot of these larger themes about feeling like you’re taking on too much…he’s so young and wise at the same time. His energy is infectious and it was a pleasure to be able to work with him.

He also wrote the screenplay. Is he open to changing his words or are you on script?

Well, you know there was a lot of play involved. We tried both versions of a lot of these scenes and, again, I was with [the film] a short time, but my understanding is that they did this across the board, to get to the truth of the moment. [Joachim] wants to explore these scenes in depth and, sometimes through improv, you can find the core of the scene and sometimes it’s right there on the page. He has an extraordinary sense of play and is very open to everyone’s ideas.

This movie screened at Cannes. What was the experience like?

It’s a blur of hair and makeup and wardrobe and that giant red carpet and the screening and getting to see everyone again and say hi. It was great fun and I’d love to be able to go back at some point.

Switching gears, is it accurate that for House of Cards your part was originally just five lines before turning into a multi-episode, multi-season role?

This character was never part of the original plan and my loose understanding, again I’ll never really know what goes on behind the scenes, is that Peter Russo, played by the incredible Corey Stoll, was not supposed to be as large a part of season one as he ultimately ended up being. And so I was brought back to keep his character going…and ultimately given a name, which we share, which is a little strange [laughs].

So that was just coincidental?

I think so. Only Beau Willimon has the answer to that.

Did you have any input into the character at all?

No, and I wouldn’t want to because this is Beau Willimon’s baby and he’s so brilliant. His mind is 10 steps ahead of anywhere I could possibly be with this character, truly, and so whatever he wrote was gold and it was the Bible and I was so happy to follow along with it.

Has your Emmy nomination for House of Cards [for Best Drama Guest Actress] had any impact on your career?

It’s still so fresh, that nomination. I can’t stress enough how unexpected that was, because I was only in one episode of the third season. It was so unexpected and the competition is so stiff. To be there with women that I have admired like that my entire [career], I mean Allison Janney, come on!

I’m sure that it has behind the scenes. I’ve been working and recently taking some time off, but yes, I mean definitely, again I don’t know whether it’s a direct result from that, but I’m sure that it doesn’t hurt and hopefully it ultimately means that I’ll be able to keep working. And hopefully it does mean that a bit more interesting roles come up. But I’ve also been very lucky that the roles that I’ve been able to play so far have been interesting and complex and three-dimensional and breaking barriers and stereotypes about women.

What draws you to a part? Is it story, director, cast, character, etc.?

It’s so different project to project. I think I’m still learning what I look for and I’m learning largely through mistakes that I’ve made and things that I’ve loved that I didn’t expect that I would, and opportunities. You know I’m drawing on limited past experience, so I think I’ll become better at that refined way of choosing as I move forward. But I think a lot of it is instinct. When I read a script that I’m in love with, I’ll play anything, anything that I can grab onto and the size of the role doesn’t always matter with that kind of thing. There are certain directors that I would do anything to work with. But largely, I think it is the character, the character that I can delve into, and whether that means she’s in every scene or in one or two scenes is not important to me as long as I think that she’s fully three-dimensional and complicated.

What’s more nerve-wracking for you: auditioning or arriving on set?

It used to be arriving on set, and that has recently shifted because I think I used to be in the practice of auditioning a lot more. I was at a point a couple of years back where I was auditioning for everything and anything that I could get my hands on, because I was trying to begin to take the very first steps of this thing we call a career…I loved auditioning because I felt like I was good at it, I’d gotten into the routine and I knew how to do them quickly and make them good or all right, or sometimes terrible, but I knew how to prepare them, and now I’m finding auditioning to be petrifying [laughs]. I still audition quite a bit. I’m just at the moment feeling good about being pickier about the kinds of roles that I’m interested in playing. I think this is part of me getting older in general. I’m less afraid to know what I want and to ask for what I want, and there are certain things and some people that I wouldn’t want to work with and you might not know that until you meet them. And I want to know, too, that I either fit a vision that they have in mind for this role in practice and not just in theory, or that there’s potential for me to figure it out so that we can work together to find it.

In your industry, how do you stay true to yourself?

A lot of my friends are in the industry, but don’t do what I do and that’s been so important. I have this wonderful, wonderful group of friends, so it’s with producers and casting directors and a couple of musical theater actors and a couple of film and TV actors, and people who are involved with different charities and other nonprofit organizations and who are creating their own work in all these different facets, and I’m so inspired by them and grounded by them. This industry is constantly humbling. You can’t get ahead of yourself, you’re gonna get knocked on your ass. Keeping that in mind has made everything a lot easier.