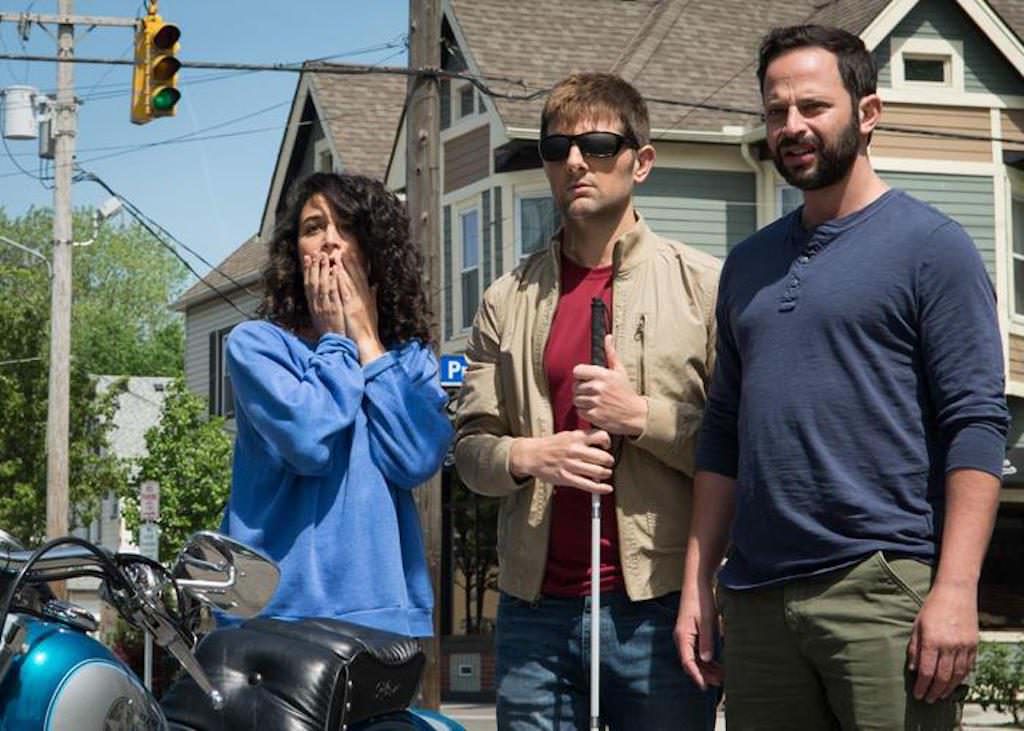 SXSW 2016: Writer/Director Sophie Goodhart on her Hilarious My Blind Brother

In the opening sequence of My Blind Brother, you meet Robbie (Adam Scott), physically fit save for the dark shades and the sweaty, anguished man he's pulling along via a tether that suggests his titular affliction. That man is his brother Bill (Nick Kroll), who Robbie has just dragged through an entire Marathon. And although he needs Bill, once they cross the finish line Robbie all but forgets Bill exists, thanking the person who was with him "every step of the way,"…God. Later that night, Bill goes to have a few beers without his spotlight hogging brother, and because Robbie couldn't actually see a spotlight, it keeps Bill emotionally tethered to him out of immense guilt. At the bar he meets Rose (Jenny Slate), a young woman attached to her own perpetual guilt machine; the bar is the setting of a memorial for Rose’s former boyfriend, whom she was in the process of dumping…when he was hit and killed by a bus.

With this setup more or less handled in a matter of minutes, writer/director Sophie Goodhart delivers a feature film debut that looks, sounds and feels like the work of a veteran director. If the highway to hell is paved with good intentions, this is a film that gleefully charges towards damnation with the good intentions of Bill and Rose routinely blowing up in their faces, yet it ends up somewhere much, much different. The three leads are tremendous.

We spoke to the writer/director down in Austin after My Blind Brother premiered at SXSW. Shortly after our conversation, Variety reported that Goodhart's film went on to cause a bidding war between Netflix, the Orchard, Starz, Sony and Gravitas Ventures—Starz won out, and the film will get a day-and-date release in 25 markets and VOD later this year.

Let’s start with the script—take us through the process from short film to feature.

I wrote the short in 2000, and that was just about Bill and Robbie, and it’s much, much darker, and in the end Robbie dies. He’s left in the ocean. And it was much more of a painful snapshot of exquisite jealousy. The short did really well, it got me work, and I tried to write other scripts, I did write other scripts that almost got made, and I kept on having those “the drinks are on me!” experiences, and then having to go, “yeah, it’s not happening.” And so then like five years later, I started writing a script about Rose, Jenny’s character—it’s about a woman who breaks up with her boyfriend and then he’s hit by a bus and killed. It’s about that guilt and desire to want to be the gorgeous, Glee-type victim, but that felt a bit thin. Then I realized I could put her into the My Blind Brother story. And then it kind of opened up.

The film's got this wonderful quality of being dark without being nihlistic and yet still warm without being sappy—how did you manage that?

I like dark comedy features, but sometimes I feel like I get to the end and I don’t feel warmed, or entertained, or really challenged, so I wanted to do something warm. So I pushed the romance aspect. I also wanted to be in a film where you’re constantly not sure who's right, or who you should you sympathize with. And what are the moral implications of everyone’s choices?

Everyone in this film has this balance of wanting to be liked and doing what’s true, and how much are you meant to live your life as a kind, good person, and how much are you meant to allow your ego to run rampant? I think I have such a high level of self doubt as a human, I’m often in relationships…well, my husband’s here, so now I’m not, but I often found myself in relationships where I was like, wait, am I a c**t, or, are they not someone I want to be with? I didn’t know. I would stay in relationships longer because I don’t want to be hated, and feel responsible for their joy. It’s a mixture of kindness and narcissism. [laughs].

One of the many hilarious lines is when Jenny’s character asks, “Who am I to decide if I’m in love?” Where was the line between what was scripted versus what these hugely talented comedic actors improvised?

They were able to perform every single one of my intentions. I think if I’d had other actors, a lot could have gotten lost. We could have not understood, or sympathized, or judged, so comfortably. And Jenny, as soon as I spoke to her, she just understood all the themes. The idea of shame, and pride, both at the same time? She was just so sophisticated and mature and funny and honest. And then Nick, too—they’re just really intelligent and emotionally in touch actors. So I can’t tell what's just the script and what's just them—I did mean all of those things, but I think they could have really easy gotten lost with other people playing them. And also, as a first time director, I was quite fearful a lot of the time. “What’s the shot? How am I doing with time?” Sometimes you’re not as observant with their performances as you should be, because the fact was it didn’t matter with these actors. So I could kind of be less brilliant because they were so brilliant.

Let’s talk about the production itself—how many days did you have to shoot this thing?

Originally we had 25 days, then it was 23, then it was 22, then we lost a day, so I think we shot 21 days. It felt really fast. The scene that I had enough time on is the best scene in the movie, which I thought was the restaurant scene. I watch that scene and I don’t sweat, and that’s because we had a day in a half to film the bar, pre-restaurant, and then the restaurant. And then the water scenes were really stressful [Robbie's goal after the marathon is to swim across a huge lake]. The lake…Ohio weather, I mean all weather changes constantly, but Ohio weather is like every ten minutes it goes from one extreme to the other. The lake went from shit brown to pretty green to waves to flat, so I think it was 12-pages of the script were based on the water, and we shot pretty much all of it in a day because we had no f**king time. We lost a whole day because we put the row boat in the water and it would just zoom off out of the shot. And also, you have to have three stunt men fifty feet from any actor, so it was really stressful. Oh, and I was eight months pregnant.

Hugely fat. I have a skinny son and a fat daughter.

This is really lovely.

So on the big night boat scene, when Adam’s character says that it takes a lot of energy to be blind, that was like, midnight, I was eight months pregnant, there were big f**king waves, and we had three minutes. And that was the most scary but most satisfying moment, watching them act that. I cried. Then again, I could have been hormonal.

How’s the reaction been thus far?

Well, I’ve had actually had a few interviews where I’ve been asked, “So, do you always fancy characters so disgusting?”

Who’s disgusting in this?

You really see that with Robbie, this amazing blind athlete who, when you get to know him, is kind of a selfish dick. But they’re all fully dimensional.

Yeah, you know the short’s actually based on my sister, who has MS. When I was around 23, she was diagnosed, and she went from being pretty shabby like me to suddenly, in my family’s eyes, heroic and impressive, and she could sit at home reading Diane Steele all day long and everyone would be like, “She’s amazing.” And she was like, “Why am I amazing?” And so I kind of wanted to talk about that weird thing, that change of perception that people have when you’re either sick or disabled, when people suddenly treat you differently for no reason. We all have the same capacity to be a dick, and to presume otherwise is deeply prejudiced.