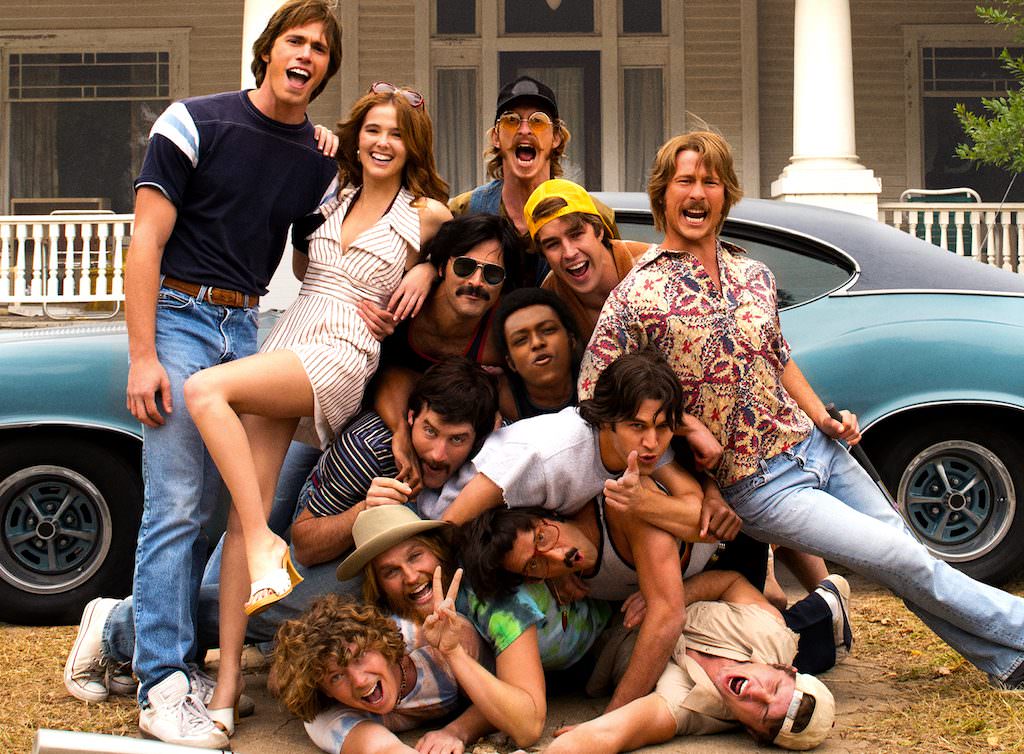 SXSW 2016: Richard Linklater’s Everybody Wants Some a Perfect Festival Opener

There are few filmmakers out there who have had as big of an impact on their city as Richard Linklater has had on Austin. Festival director Janet Pierson introduced Everybody Wants Some, saying that Linklater was the reason she moved to Austin in the first place. She then handed the reigns over to Lewis Black, founder of the Austin Chronicle and cofounder of Austin's SXSW festival, as well as the director of the documentary Richard Linklater: dream is destiny, which is playing here in Austin. Black made it clear how crucial Linklater has been to the festival and to the city itself. In one memorable anecdote, he recalled an early festival gathering, in a single room, of Linklater, Quentin Tarantino, Robert Rodriguez, Guillermo del Toro, and other luminaries of the independent film world. Black was there, and he said that he realized at that moment that if the roof caved in, "there goes the independent film movement." So the crowd was good and primed for Everybody Wants Some, and after Linklater came on stage to say hello, introduce his cast, and briefly set the stage for the film, which he has called a spiritual sequel to his beloved classic Dazed and Confused, he threw up an image on the screen that made everyone in the audience howl; it was a photo of a young President Obama (he was in Austin with the First Lady giving a keynote address), in college in the 80s (the setting of Linklater's latest), with a fake handwritten note that read: “I had a blast in college in 1980! Rock on – Barry.”

And then the film began, and the laughter pretty much carried on throughout its' entire run time. The setting and soundtrack is immediately Dazed-like, just a few years removed to give it that 80s vibe; we see a bunch of vinyl records in the backseat of a ’72 Oldsmobile coupe, we hear the Knack's "My Sharona", and we meet Jake (Blake Jenner, Glee), a young pitcher starting his freshman year at a southeast Texas university. Jake is moving into one of the two dilapidated houses that's been reserved solely for the baseball team, and the second he walks in, the fever of a certain type of college experience (read; male) begins; chaos, hostility, camaraderie, hi-jinx, and the endless thinking about, talking about, and searching out of their fellow collegiate women. He meets the handsome, hostile, hard-hitting (on and off the field) McReynolds (Tyler Hoechlin), who explains in no uncertain terms that he, and most of the members of the team, don't like pitchers.

From here, only minutes into the movie, we're treated to one of Linklater's great gifts as a filmmaker—the easy, funny, endless chatter between a cast of sensitive (and not-so-sensitive) souls who come in and out of the frame in what looks like a free-for-all of improvisation. Knowing Linklater (specifically, the way he made the opening minutes of Before Midnight seem like a single take with talented actors doing a lot of improvisation, but, as he told us, was actually a carefully choreographed, complex series of shots), Everybody Wants Some only feels loose and limber because the writer/director has honed his craft to such a degree it's largely hidden.

The cast will be largely unknown to a huge percentage of the audience, and are, to a man (and the one woman with a significant role, Zoey Deutch, who is wonderful as Beverely), excellent. There's the philosophical Finn (Glen Powell, fantastic), the team's resident intellect and most creative ladies man (he reminded me of Dazed's Don Dawson, played with a similar intelligence by Sasha Jenson); Roper (Ryan Guzman), one of the team's leaders who takes Jake on an important ride in the opening minutes where he meets Beverly); Dale (J. Quinton Johnson), the team's one African American and perhaps the most mellow presence in the film; Billy Autry (Will Brittain), whose treated pretty roughly by the guys for being the team's rural, hayseed punching bag; Niles (Juston Street), a possibly psychotic, pathologically lying pitcher from Detroit who has a touch of Ben Affleck's O'Bannion from Dazed in his DNA; Nesbitt (Austin Amelio), ropey, slightly dopey, and with some of the best physical humor int he film; and the hilarious California hippie Willoughby (Wyatt Russell), who gets a lot of big laughs in the middle of the film and who turns out to be the team's most amusing chameleon. This is a film about male bonding, among other things, so the cast is largely (like 94% largely) male, but the aforementioned Deutch does wonders with her role.

While Jake is hardly the film's most lively screen presence, he is the right choice as its' center, as we watch him subtly change over the course of the story from the shy, slightly out-of-his-league (in more ways than one) newcomer to a young man with growing confidence and no small amount of soul and sensitivity. If you've seen the trailer and been left a little worried Linklater's hot hand had cooled, know that this film, despite its' many funny moments, flows with such a liquid, unhurried pace that the rigors of a two minute trailer could never do it justice. This is Linklater country, where characters and are given time to flow, banter, and bounce off one another, and scenes flow rather than tick by. There are hilarious little throw away moments (one involving Nesbitt borrowing one of Jake's records) that would seem uninspired in print but, on the screen, color the film with such a degree of weird but utterly believable human behavior you laugh out loud. And considering most of these humans are horny college guys, that behavior is suitably absurd—you keep wondering if what you just saw was really scripted, or, was just a spontaneous moment of joy released by an actor who is fully inhabiting a moment.

As loose and easy going as the film is (the plot is essentially what the boys do in the days leading up to their first day of class), there are moments of real searching, of young people just starting to grasp how large their lives can really be, and how their adolescent dreams, say, of becoming a Major League ball player, are likely to go unrealized. As it merrily rolls towards its conclusion, a boozy, party heavy romp, you start to think of not only Dazed and Confused's snapshot of youth, but of the end of Boyhood, which left another sensitive soul at the brink of his college experience. And like Boyhood, Everybody Wants Some makes art out of the everyday, and slips in meaning when all you thought you were getting was a slice of life, beautifully rendered, and possibly created on the fly.