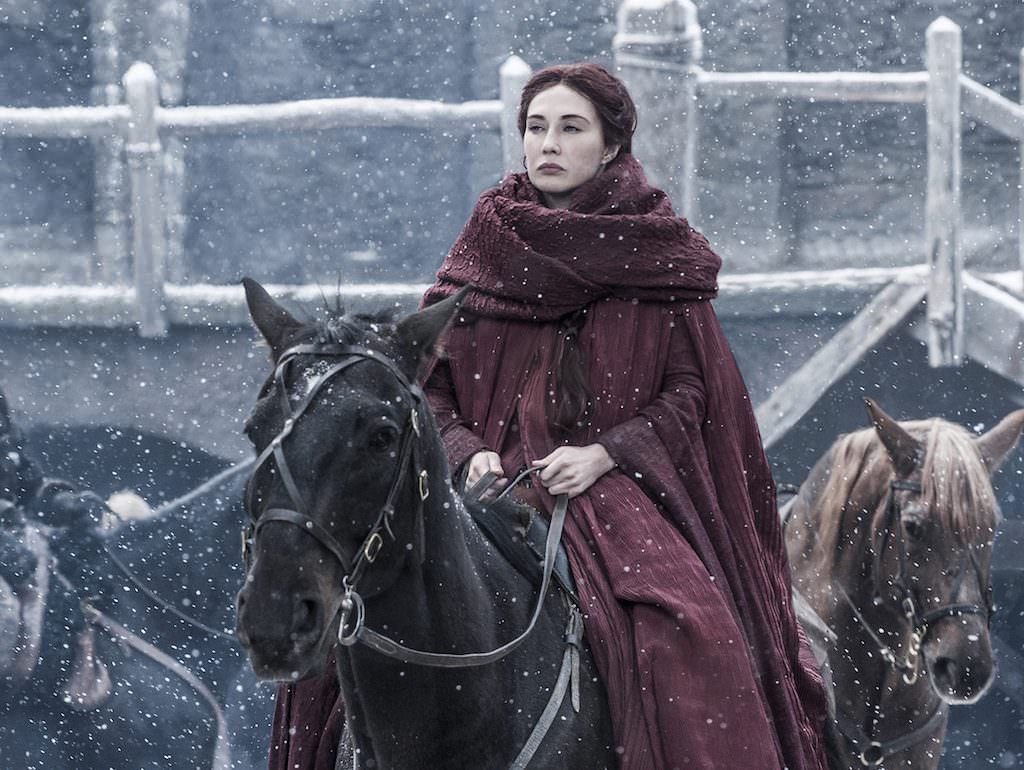 Yesterday we wrote about that epic Game of Thrones season six trailer, which has the most number of views for any trailer in HBO history, heading towards 17 million at the time of this posting. Today, we're going to break it down for you and offer our speculation on how things are going to turn out in season six. But first, here it is again, because it's really that fun to watch:

Now, let the wild speculation begin! (Note; we haven't read the books). Also note, do not read this if you are afraid of spoilers, as we could be right about some of this stuff!

Doth protest too much, new trailer. The opening seconds want you to believe that Jon Snow is dead so bad, you have to wonder why they're trying so hard. "He's gone," opines someone in voiceover. And even when actor Kit Harington is seen on set filming scenes for season six, he claims the scenes he's filming are of him being dead (or a ghost). Right.

0:14: The Revenge of the Lannisters

One of the things that George R. R. Martin has been so masterful at in the books (we've been told) is making you care about characters you initially hated, and make you sour on characters you initially loved. Yes, there will never be a time when Ramsay Bolton earns your empathy, but think about what he, and the brilliant showrunners for the HBO adaptation, D.B. Weiss and David Benioff, have done in making you go from hating Jamie Lannister to kind of liking him (or loving him, for that matter). Yes, Cersei is still a tough sell, but she had it rough in season five, and that humiliating "walk of atonement" she took was hard to watch, whether you hated her or not. What the new trailer shows is Jamie Lannister having a How Stella Got Her Groove Back moment, thanks to his rage over Myrcella's death, and promising his beloved Cersei that they're going make everyone pay.

Our call:  The Lannisters always repay their debts, but they prefer killing their enemies more. I wouldn't want to be the High Sparrow or Ellaria Sand.

0:19: Ser Davos Will Play a Huge Part in Season Six

While it's unclear exactly whose funeral pyre Ser Davos is standing over, what is probably very clear is that he'll be one of the many GOT characters looking for revenge in season six. Shireen's death, ultimately decided upon by Stannis but engineered by Melisandre, will likely be the driving force behind his rage. And what about Stannis? Last we saw him, Brienne was about to end him at the point of her sword, but we never did see that moment, did we?

Our call: Ser Davos wants to kill Melisandre, but the Red Queen slithers out by promising to bring back a certain someone vital to the cause, which we'll touch upon at the very end of this deep dive…

0:21: The Boltons Will Get Their Comeuppance

These Boltons, they're the worst. Ramsay is arguably the most evil character on a show, and that includes the White Walkers. And the fact that Reek escaped with Sansa means that they've got two very motivated people, with lots of knowledge about their inner workings, ready to see them relieved of their stewardship of the North, and, hopefully, relieved of their beating hearts, too.

Our call: GOT rarely gives you what you want, and why would they start by delivering Ramsay's head on a stake? He'll survive this season, because that's the primary skill set of cockroaches and rats.

"The great victory I saw in the flames, it was all a lie." Yes, yes it was, Red Queen. So go ahead and do the thing we all think you're going to do, and bring Jon Snow back from the dead.

Our call: It's also unlikely that GOT will do what you think GOT should or will do, but…Melisandre brings Jon Snow back from the dead, only he's not the Jon Snow we once knew.

Okay the guy's a great tracker, and of all the things to call foul on in a fantasy show with dragons and White Walkers, it seems ridiculous to make an issue of finding a single ring in a huge, 1,000 acre plus field. But come on. Anyway, Jorah won't have that much time to save Dany, considering the greyscale he caught last season, and even if he does find her, will he then give her the greyscale? Can the Mother of Dragons die from greyscale when she can't even be burned to death?

Our call: Ser Friend Zone finds Dany, saves her (with a little help from a few flying friends), then dies.

We already pointed out that the huge statute of the horseman we see in the trailer probably means that Dany's been taken on a long journey deep into Dothraki country. This doesn't bode too well for our favorite dragon mother.

Our call: Considering Drogon already saved her once, and GOT rarely if ever uses the same trick twice,  you could assume the most logical course of events would be Jorah mounting a seriously spectacular escape plan to free her. BUT, considering what happens later in the trailer, Jorah might be getting some major help, and perhaps GOT can get away with another 11th hour dragon rescue by making it not one but three dragons.

0:41: The High Sparrow Will Probably Rue These Words

Yes, High Sparrow, you overthrew an empire, in bare feet, while being a huge killjoy. But you've also routinely humiliated the most vengeful woman in all the seven kingdoms, one who has a little (actually huge) trick up her sleeve, to say nothing of the return of Jamie.

Our call: The High Sparrow will lose his nest, have his feathers plucked, and be cooked for a big Lannister feast.

It's probably not Tyrion talking directly to Sansa when he says "You're in the great game now, and the great game is terrifying." GOT's always using voiceover from one scene and overlaying it over another. But, the point is, Sansa is in the great game, and having finally escaped from the greasy, blood-soaked hands of Ramsay, after having to escape from the greasy, blood-soaked hands of Joffrey, no one, I repeat, no one in Westeros deserves revenge more than this young princess.

Our call: If the GOT world were remotely fair, season six would see Sansa driving a stake through Ramsay's heart and letting Reek finish the job. But, short of that, our call is Sansa will play a huge part in the power struggle to regain the North, and have a hand in removing the Boltons for good.

Where else would Tyrion be with a torch? With Dany gone and the world spinning ever more out of control, might the most clever imp of all want to release some dragons?

Our call: Tyrion releases some dragons!

Yes, it might be Drogon, whose never been enslaved in the first place, or, it's one of the dragons Tyrion released, pissed off and looking for its' mother.

Our call: The dragons help in Dany's escape from the Dothraki

"Order your man to step aside or there will be violence," says Lancel, her one-time lover and a Lannister, to boot, whose now a righteous little Sparrow. Lancel, are you actually looking at this "man" you're telling to step aside? Don't you realize this is the Mountain, whose been operated on like Frankenstein's monster and was re-made specifically to wipe out all of Cersei's enemies? That's no man, my little friend, that's Death itself.

Our call: Lancel is speared like a cocktail weenie.

Lots of stuff happens very quickly once the music changes and the montage begins. We see Arya getting slapped (another Lannister who desperately needs to catch a break), Little Finger in the North, Margaery still stuck in prison, someone (a wight?) being set on fire, Brienne doing what Brienne does (destroying someone), Theon (Reek) on the run, the House of Black and White, Melisandre once again seducing someone (who? why?—Jon Snow), possibly Arya (or someone who looks a lot like her) jumping off a ledge like James Bond or Jason Bourne, a clash between the Boltons and the Wildings (go Wildings!), Margaery and the High Sparrow having a moment, Arya with those opaque eyes of blindness, a lot of soldiers and fighting that's hard to make out, Sansa running, the Dothraki charging, the Wildings attacking (all different narratives), and….Bran Stark, older, and standing…with the King of the White Walkers!

Our call: Lots of people die, some live.

Why would Ser Davos risk his life to defend a dead body unless that body could be resurrected?

Our call: This is what we were talking about before, with Davos not killing Melisandre because she's going to bring back Jon Snow, and then, possibly, have sex with him.