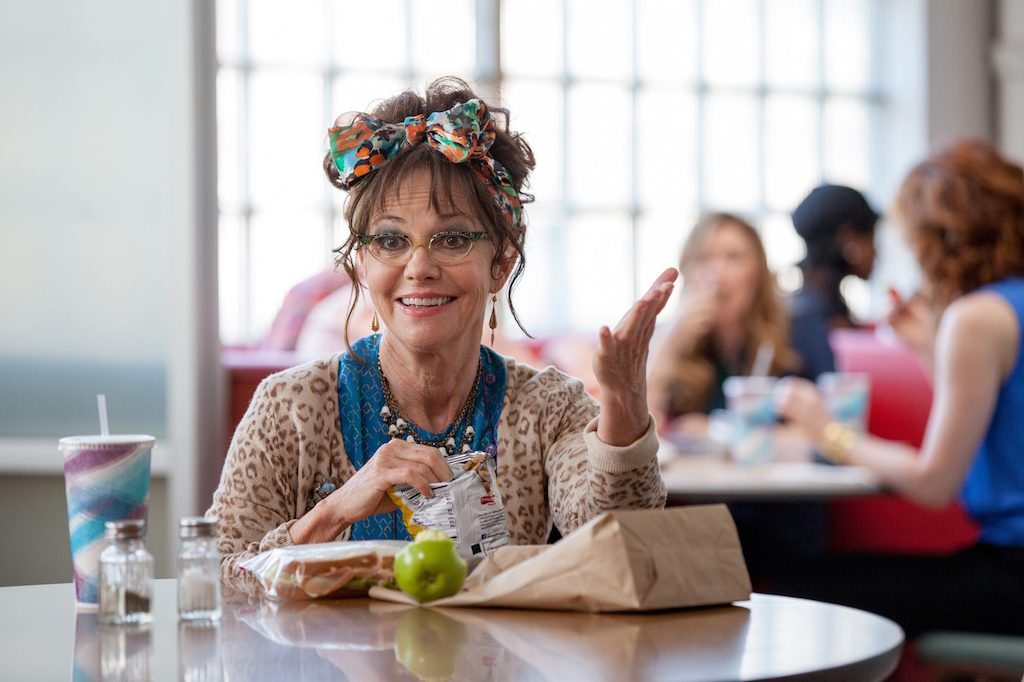 Hello, My Name is Doris, the latest comedy from Wet Hot American Summer co-creator Michael Showalter, stars Sally Field as a woman falling in love for the first time. We talk to the writer/director about creating a new type of comic protagonist, landing Sally Field and having to be the bad guy on set.

Hello, My Name is Doris started as a short film. Can you tell me a little bit about how it came to be?

I was teaching screenwriting at NYU Graduate Film School for a bunch of years, and Laura Terruso who was a student there- not my student- had made this short film called Doris and the Intern, which tells the story of a kind of quirky older woman at an office who becomes romantically infatuated with a 19-year-old intern. Played much for comic effect- I mean, she kind of imagined him naked playing hacky sack. And I just liked the character of this woman, who felt very archetypal to me. She reminded me in certain ways of a character from like Grey Gardens or something. A new type of comic protagonist that I hadn't really seen before. Laura and I became friendly and decided we wanted to work on some stuff together, and after trying out a bunch of different ideas, we landed on: What if we took the Doris short and expanded it into a feature?

It’s been described as a late life coming-of-age story. Is that the crux of it for you?

Yeah. I mean, among other things. It's a story about finding yourself and falling in love and having your heart broken. For me, a lot of it is sort of almost like a John Hughes movie or something. It's that first time that you get your heart broken and kind of how do you grow from that? How does that change you? You know? Do you recover from it or are you defeated by it? And then a larger story about life, of breaking out of the things that maybe are holding you back from being happy, and that's not about materialistic things. That's not about being rich or anything like that. It's just about being happy on the inside and being true to yourself.

We've seen the May/December romance on the screen many, many times with the older man/younger woman but this turns that on its head. It's a comedy but at its heart, there's truth there. How did you approach that? Did you have any reservations creating a whole feature film with that as the premise or was that part of the attraction?

I mean, the only reservation for me was not wanting it to feel like we were making fun of her. We wanted this to be about people, you know? But no, I didn't really take that too much into consideration. I just really liked the character.

Obviously, the chemistry between Sally Field and Max Greenfield is important to pull off the story. I understand Sally Field was at the top of your list for Doris, so how did you get her involved and how did you decide who to play her love interest?

Well, Max Greenfield was actually attached to the movie before Sally was. And I knew Max from having worked with him on a different project. As far as getting Sally, we offered her the part not thinking she would do it- because she really is perfect for it and is that sort of pie in the sky, ‘Oh, my God, if only Sally Field would do this movie’ kind of thing. And by some miracle, she said yes.

When you were making it, did you feel that they played off each other well?

Sally and Max and I had gotten together a few times before we started shooting just to kind of hang out and get to know each other, and they're both such great people. They're both so humble and hard-working and funny and nice, and I, across the board, really wanted to work with people that I thought exuded a certain goodness, you know? They're both just good, hard-working people who believe deeply in the material and really gave their all to it. We didn't have a lot of money and a lot of time, and they were just great. They were just great.

What were the challenges that you came across when you were shooting? Limited time and budget, obviously, being two of them.

Well, I mean, as with any low-budget movie, you're always fighting against the clock. You have only a limited amount of time, you have a lot of material to shoot, and so the challenges had to do with being able to make our day and get everything we needed that we had scheduled for within a day, or wanting to make sure that it was all looking good and that we weren't compromising too much. The challenge of making a film like this with a low budget is that you just have a very low margin for error. Things just kind of have to go right, and the way you mitigate that is by just being really prepared and casting the right people, and having the right cinematographer, and the right costume designer, and the right production designer, and having everybody on the same page, working really hard. And then as a director, sometimes you have to force people to do things even when they don't want to, because you know that two months from then they won't remember it. Sometimes the actors were like, ‘I'm tired. I don't want to do this.’ And you just sort of have to beg them to do it, knowing that you won't be tired in two weeks, you know?

You have to play the strict parent role?

Yeah. You have to be the bad guy sometimes and force them to do stuff, because I've been through this enough to know all is forgiven if the movie is good.

You're a writer, actor and director: a triple threat. Do you see yourself as one before the other?

My real passion is in the writing and the directing. The acting is quite incidental for me. I admire actors quite a bit and I love working with them, but it's not what really gets me up in the morning. I would be very happy to be behind the camera. I don't particularly like putting on make-up and costumes and all that stuff.

You've been involved in the renaissance of television with Wet Hot American Summer being one of the first things to be rebooted, which is now seeming to happen across the board.

Is it an exciting time to be a creative person in the industry?

I think it is, actually. Especially in television. I kind of think that maybe 10 years from now, or 20 years from now, there's going to be a kind of hybrid form of entertainment, which is somewhere in between a TV show and a movie. Where something can be four episodes, three episodes, one movie. It can be anything. It doesn't have to be Friends and 500 episodes of a TV show. It's just all kind of blending together.

You're not restricted with the format as much?

It's just exploding. Like, every day it explodes. I mean, two years ago the TV landscape didn't look like what it does now. And I'm sure five years from now it'll look different again, and Netflix has so much to do with that, obviously.

TAGSHello My Name is Doris