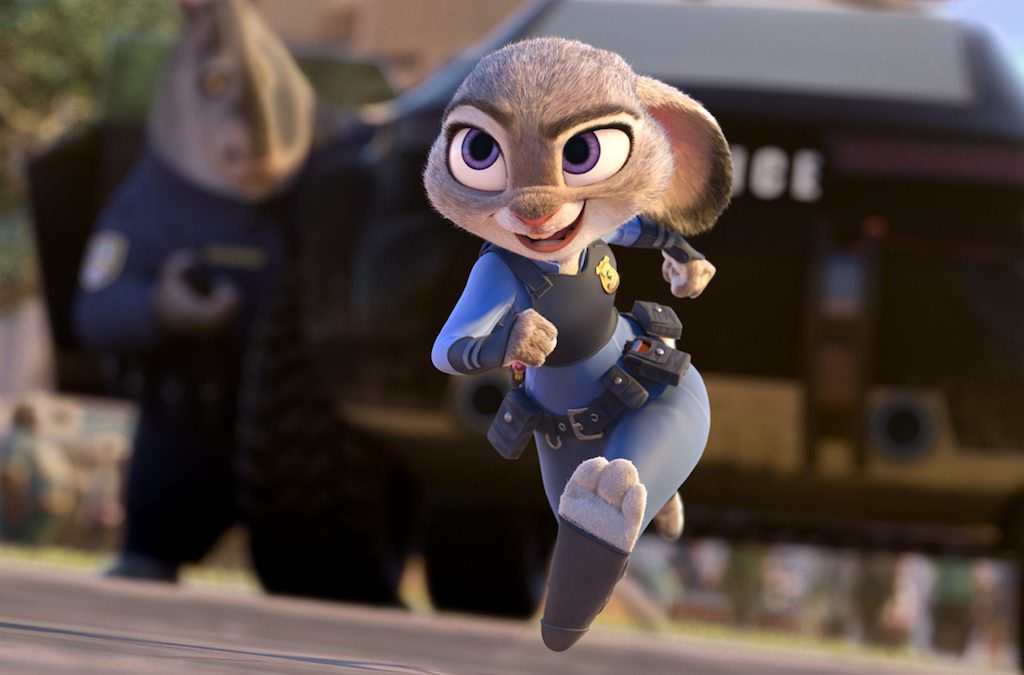 Animation Supervisors Are the Zookeepers On Disney’s Zootopia

Kira Lehtomaki likes the idea of her role as the protector of “Judy Hopps.” Lehtomaki, an animation supervisor on Disney’s upcoming Zootopia, animated and supervised multiple segments of the feature film but was mainly responsible to oversee the female bunny police officer voiced by Ginnifer Goodwin.

Zootopia is Lehtomaki’s first credit as an animation supervisor (one of five credited on the film), but she’s been working as an animator for Disney for nine years and trained through Disney’s talent development program. Her work includes Oscar winners Paperman and Frozen, plus Bolt, Tangled and Wreck-It Ralph. Lehtomaki earned her position on this film by interviewing for an internal job posting at Disney. Nine years into her career at the studio, where she works with a relatively small community of people —  “we’re all one giant, goofy family,” according to Lehtomaki  —  on large-scale animation projects, Lehtomaki knew she would likely be working on Zootopia in some capacity. Ultimately, she was specifically entrusted with Judy.

“When [heads of animation Renato Dos Anjos and Tony Smeed] offered me the job, they said ‘we had Judy in mind for you,’” she said. “We all know each other so well. We know what our strengths are, what our weaknesses are, what our personalities are, so I think Renato felt I was a good fit for Judy.”

As an animation supervisor, Lehtomaki animated along with an army of others working on the film, but the title also meant she was responsible for maintaining consistent performance and design for Judy in her role throughout the movie.

“In the hand-drawn films in the past, they liked to make sure each character looked like it was drawn with one hand,” Lehtomaki said. “Similarly, my job was to make sure that it felt like Judy’s performance was consistent and the way she looked was consistent. Because even though we have a computer model that we’re moving around, it’s a puppet, you could really make Judy look quite different than she normally does. So we had all these rules, about how she smiles and frowns and stands, as well as acting references for her personality.”

Playing the keeper of Judy’s unique “personality” also made Lehtomaki feel quite close to the character—in fact, by the end of the movie, Judy felt like her best friend.

Lehtomaki spoke to The Credits in Denver, where she was on tour speaking to film students at the University of Denver and Colorado State University. She spoke that same week at the University of Washington, her alma mater. The studio sent multiple animators on tour nationwide this month, in part to promote Zootopia’s opening date but also to provide an overview of the culture at Disney and encourage up-and-coming talent in the industry.

After Disney acquired Pixar in 2006, John Lasseter and Ed Catmull took charge of the Disney animation studios and “put all of the creative decision-making back into the hands of the filmmakers, which I think that has really liberated us to make the best movies that we can,” Lehtomaki explained the history at the studio. “We now have a director-led studio.”

Zootopia is co-directed by Byron Howard and Rich Moore. Lehtomaki was working with Howard on Tangled when he started developing the idea behind the new movie. The idea—inspired by Disney’s 1973 Robin Hood—began with the simple goal to create an anthropomorphic animal movie where the animals were true to scale.

“A mouse is actually 1/96th the height of a giraffe,” Lehtomaki explained off the top of her head, demonstrating the amount of precision the animators were expected to portray in the movie. “This would have to be a city for animals built by animals, so how would animals of such varying sizes navigate through the city? There were all these questions. John Lassiter and our studio were really big on research. Before we even have a story in mind, it’s about creating a believable world.” ​

That extensive research included interviewing city planners, behaviorists and nutritionists, and even a safari trip for 12 of the animators to Africa, where the animators were able to observe the pact between natural predators and prey around the “watering hole”—which in Zootopia is at the heart of the animal city.

“Animators are observationists; we love people watching; we’re always looking for those little details and anything we can grab and put into the animation to make it that much more believable,” Lehtomaki said. “With these animal characters, even though they’re bipedal, we didn’t want them to feel like humans in animal suits. In their posture and the way they stand, we tried never to make them too upright because the moment that their chest sat over their hips they felt like a human. But if you leaned their torso forward a little more and kept their hands out in front they felt a little more animal-like. We called it the ‘squirrel back,’ where you have the curve of the back and the butt sticks out a little bit. That and minimizing or dropping the shoulders made the characters feel more like animals.” 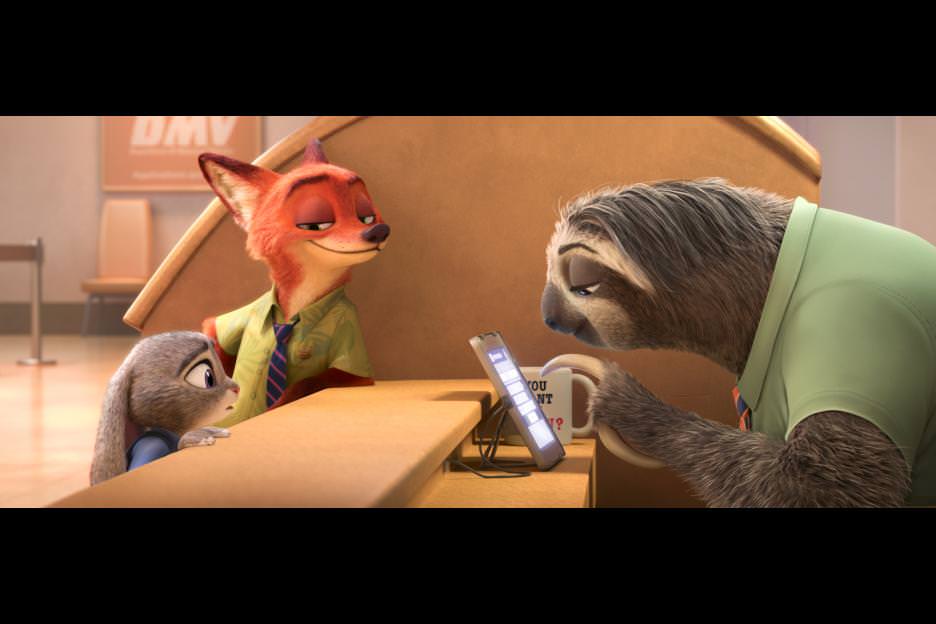 But aside from her true-to-life animal qualities, Lehtomaki also jokes that Judy Hopps is clearly a “Disney princess,” in part because she was voiced by Goodwin, who is best known now for her role on Disney’s ABC series Once Upon a Time.

“I did get to go meet with Ginnifer in the recording studio. I felt like I really related to her because she’s a big Disney fan as well,” Lehtomaki said. “And her sister is an animator, so she really gets what we’re doing. She was so instrumental in Hopps’ character.” Lehtomaki said once Goodwin was cast to voice Judy Hopps, it shaped the character’s personality, essentially changing Judy from a cynical character to a more optimistic one  —  which also seems an appropriate emphasis for her protector/supervisor. “I will always and forever want to work for Disney,” Lehtomaki said with a laugh, after explaining how hard she worked to get a job at the studio, a goal that began as a childhood dream.

Lehtomaki declared her life ambition to be a “draw-er” specifically for Disney in Kindergarten, a goal that remained consistent throughout her life. Originally interested in a design major, Lehtomaki ended up studying computer science on the advice of a distant connection at Disney.

“I was in love with the drawing and the hand-drawn films like Sleeping Beauty, so I was all set to go to art school. But at the time I was looking to go to college, CG animation had come to the forefront,” she said. “My dad had a friend who had a nephew at Disney. I emailed him and he gave me the advice to definitely keep drawing but learn how to use the computer. I kind of took that to heart.

“Now of course I’m an artist and I don’t program at all, but [my major] has supported me a lot,” according to Lehtomaki. “I can talk to the technical folks, because we need to work on a lot of tools together, and we can speak the same language. And it made me not afraid of a computer and it taught me to problem-solve, which is something that I do every single day.”

Ultimately she credits the Internet with opening up animation as a career to more people, especially women. “It’s made everything accessible to everybody. There’s no longer that barrier of the niche group of people who teach each other,” Lehtomaki told The Credits, and proceeded to provide a group of college students in Boulder with the same encouragement.