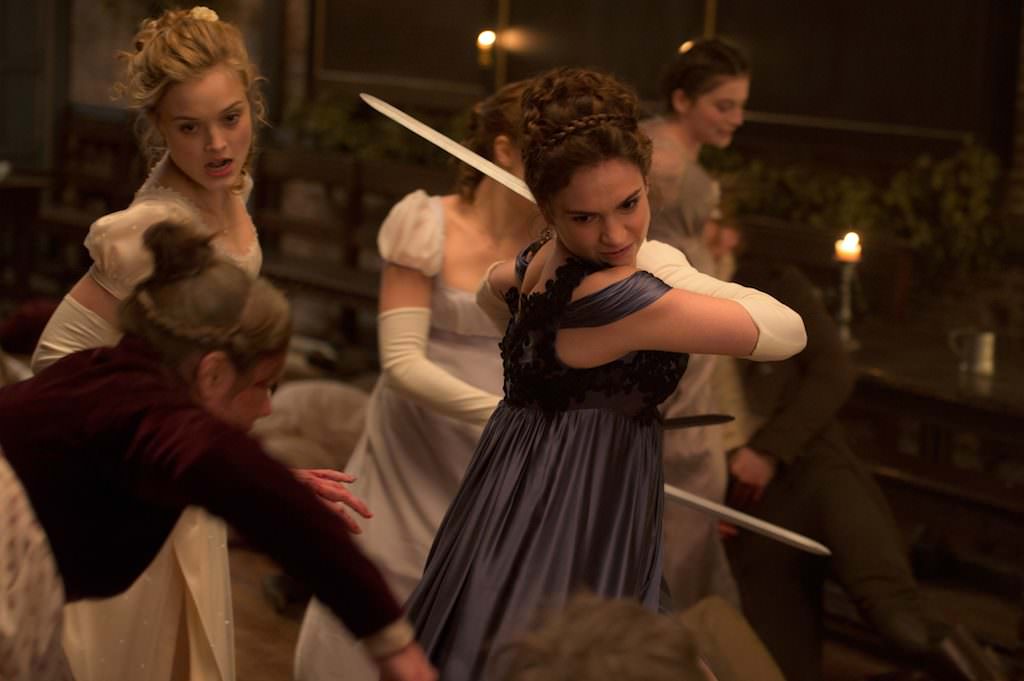 Pride and Prejudice and Zombies, the film adaptation of the novel adaptation of Jane Austen’s iconic tome of class, manners, marriage, and love, opens this week. Starring Lily James as heroine Elizabeth Bennett and Sam Riley as Mr. Darcy, these two have something else on which to focus their fraught, unlikely courtship: the undead. As a zombie disease sweeps through the bucolic British countryside and London walls itself off from the plague, the audience is treated to a refreshingly badass set of Bennett sisters — raised for battle, not for the kitchen, as their sage-like father admonishes a house guest. Yes, this movie will anger absolute Austen acolytes, but for everyone else, it’s a pretty killer (sorry, had to) combination period piece and empowered-young-ladies survival tale/action flick.

Given the film’s total faithfulness to the period setting, special care was clearly taken to conceive and execute (in more ways than one!) the movie’s unique Georgian-era zombies. As this took a lot more than work than merely plunking down a herd of Romero-style monsters into the drawing room at Pemberley, we sat down with production designer David Warren to learn more about the particulars behind visually melding English period elements with gory science fiction. 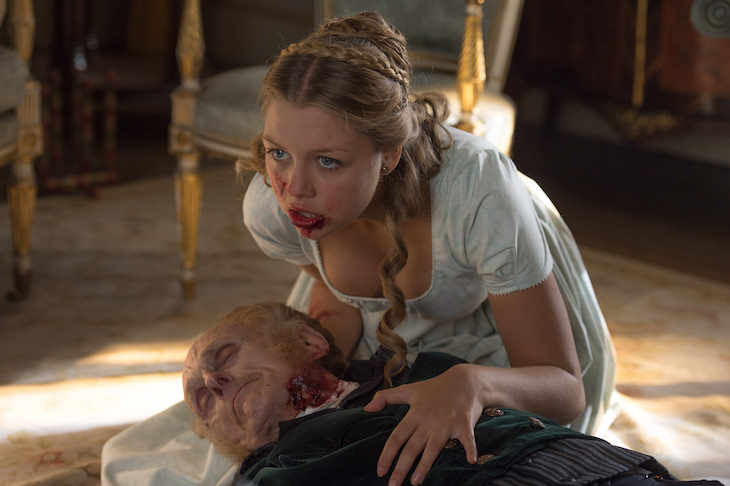 We're so impressed with how the film seamlessly places zombies into Georgian-era English countryside. How did you even start? What were some of the biggest obstacles?

Ha! Conventionally, time and money. No, seriously, the first question we asked ourselves was one of tone — and I think Burr [Steers, the director] got the tone bang on, he decided to play it very straight, to be respectful and authentic to the period in which the story is set, and to follow the spirit of both Pride and Prejudice and Zombies [the adaption by Seth Grahame-Smith] and the Austen original. For that I would say we raised a fairly high bar with regard to the look of the picture, high quality locations and authentic dressing, so stylistically the period becomes something we are comfortable and familiar with. From then we could overlay the effect on society of the zombie plague, but we already had a good backbone to it.

Burr from the start had all sorts of visual ideas around what England would look like, all based on the progress of the zombies and society's reaction to them. First, London is walled off from the plague-stricken surrounding counties, a great idea which we worked up referencing Napoleonic-era fortifications and contemporary monumental architecture. Then, once the plague stalls before Hertfordshire, a massive canal fed from the Thames cuts off the zombies and traps them in a wasteland in between. All that was great to design and set us up for the vistas of plagued England. Beyond the safety of the government's barriers, society has devolved to its worst instincts, really, the upper classes have fortified their houses in varying ways, and the poor muddle on or get subsumed into zombiedom. Once we got into the English countryside we were constantly asking ourselves, “what would they have built here, to keep them out?” so in the beauty of all these rolling parklands there are acres of iron spiked railings, huge rotating man-traps and so on, but sitting in a period landscape.

On the topic of that landscape, how does putting zombies into a period piece change the way you can approach the supernatural element? For instance, are there any major no-no's for these particular zombies, given the era in which they're set?

Early on there was a big sit-down to work out the rules and regulations of our zombie world. I would say the film is less supernatural than “biological horror” — the zombies were always meant to be a real physical threat, so we had to work out how the disease travels, matures, and how you kill them. This always seemed to devolve to the question of brains — eating human brains to survive, blowing them to gloop to kill them, very nice for production meetings. Some things we changed a bit from convention — ours can run, they have a certain amount of thought which devolves as the disease progresses. With respect to the period, some interesting things connected with class distinction cropped up. In the early stages of the disease they can reason, some camouflage themselves into society to keep appearances up — in effect we have zombie snobs, so I would say our zombies have more facets to them than the norm. 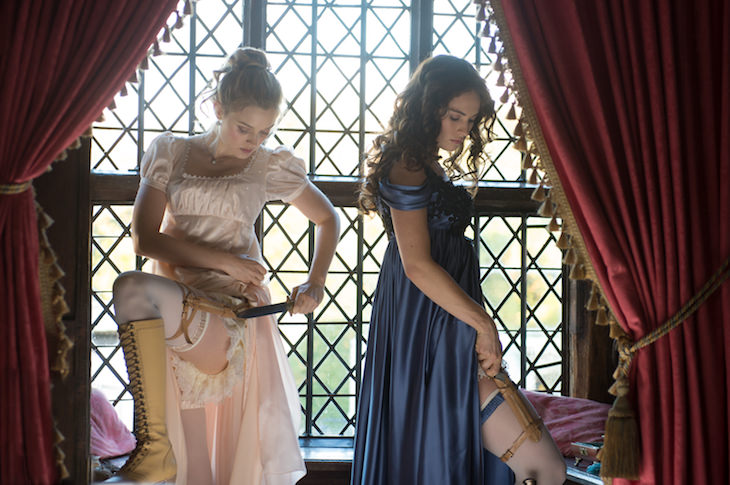 Clearly, weapon-toting Georgian-era young ladies are not the norm. How did you decide to outfit the Bennett girls for a degree of realism?

Our armorer, being well into the Napoleonic period, got us started with an arsenal of correct period military weapons. All the Bennett sisters’ flintlock rifles are period replica military arms, and they felt absolutely right for them. I think as it transpired they were perfect zombie weapons, hurling a heavy lead slug at fairly low speed, perfect for splattering the head of a rotting zombie. Their bladed weapons were much more special, based on a real Chinese weapon we had found. Each sister had a custom made box of interchangeable blades, depending on the demands of the day. This was all spurred from the Bennett's Chinese combat training and gave them a special facet to set them apart from the conventional arms and techniques around them. 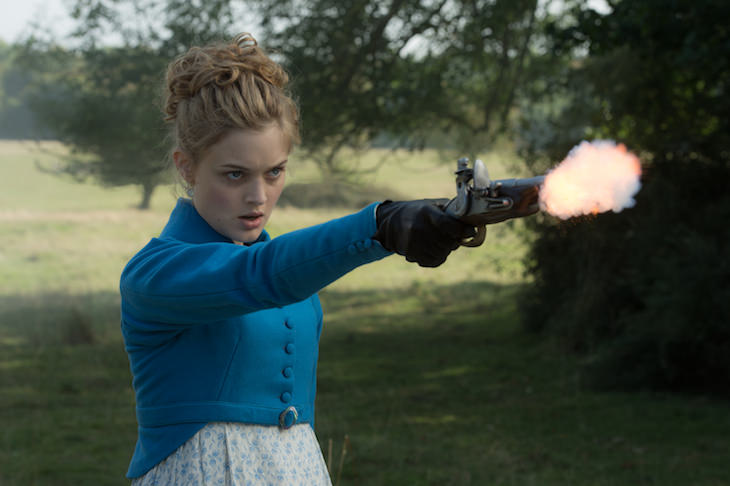 What went into adjusting the period locations, where most of the action happens, to make them zombie-ready?

Each of the key houses in the story has a particular defense to separate the upper-class families from the land around them. Netherfield can only be approached through secret tunnels, so we had to split the location into sections to resolve that. Darcy climbs through a secret door on one exterior location, travels down a tunnel in another, and finally ascends into yet another location for the interior. We set up the first exterior with some CG work to show an extended line of zombie fencing, but otherwise that whole sequence was practical locations butted together.

Longbourn similarly had a tunnel entrance, which we luckily found we could fake going into a folly in a beautiful orchard in Hatfield, and that led into a tunnel complex passing beneath a moat, coming up into yet another interior location, so it was a constant job to tie all these together.

The De Burgh estate we decided to raise on stilts, as Lady De Burgh was obviously wealthier than the other two estate holders. I hope that's still in, as it was a nice job conceiving Hatfield House being fifty feet in the air on iron legs.

Expanding this out to the greater landscape, especially the wastelands outside of London was a big job…we rooted ourselves on a fantastic common which had a very good bleak look, and built a military outpost and encampment there with extensive zombie defenses. This became the practical crossroads for the the whole end sequence, in one direction conceptually you could see London with its massive wall, in another the road led to the huge canal and Hertford beyond, so you could always locate where the action was taking place.