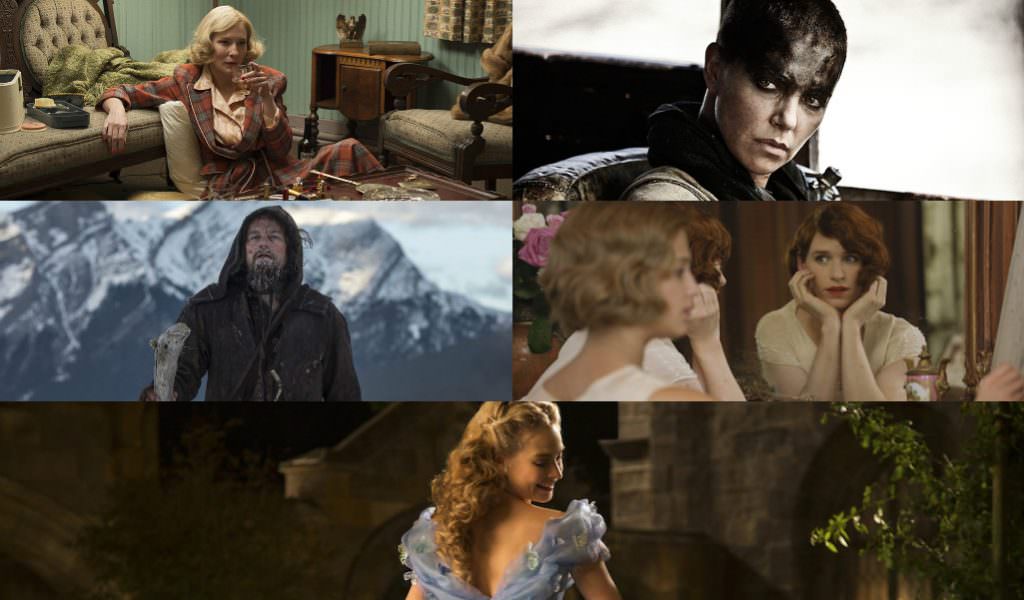 One of this year’s most eclectic categories at the Academy Awards is the category for best achievement in costume design. The five films in that category each take place in a distinctive time period and the costumes in each production brilliantly capture the look and appearances of the film’s characters.

In preparation for the Oscars on February 28th, we decided to take a look at the five nominated films in this category to see how the costume designers were able to achieve such genuine looks for their main characters.

Set in New York in the 1950s, Carol tells the story of a budding romance between a rich housewife (Cate Blanchett) and a young admirer named Therese (Rooney Mara). The two women are on opposite sides of the economic spectrum and Powell attempted to show this in her wardrobe choices.

When we spoke to Powell, she talked about finding the wardrobe for her two leading ladies. For Therese, she “started with researching images from the period, a mix of street photography and photos of real people in real situations, like a person in a shop, for instance.” Because Therese was a young middle-class woman who worked in a shop, Powell found clothing that young women in that economic situation would wear. Finding Carol’s wardrobe was a completely different matter. “Carol’s looks came more from fashion photographs,” Powell said. “I looked at the back issues of Vogue from the exact months in which the film takes place.”

Knowing that these two characters came from two different worlds, Powell was able to create distinction between them even before they met onscreen. These looks helps the actresses find their characters and helped the audience see how different these women were as their controversial romance began.

Months before Carol hit theaters, Powell’s earlier work with actress Cate Blanchett was on display in Disney’s Cinderella. Set in a fictional realm, the film used vibrant costumes to bring the fairy tale characters — including the evil Stepmother, played deliciously by Blanchett — to life.

“The costume designer’s job is not just putting clothes on people. It’s actually helping create the character.” Powell told Variety.com about bringing these characters onscreen. She added, “It’s helping the director create his vision for the whole film and it really is about collaborating with the actors.”

The collaboration on this well-known story was an intense one which included dressing dozens of characters. Perhaps, the most complex costume though was Cinderella’s beautiful blue gown, which she wears to the Prince’s elaborate ball. According to an interview that was reprinted on The Credits courtesy of Disney twenty-three Magazine, Powell noted that she wanted the dress to offer up “a lightness and simplicity.” She said, “Despite the fact that it’s physically huge, I wanted it to appear weightless.”

Powell’s work on such elaborate and unforgettable costumes paid off as the film — and its costumes — received critical acclaim.

Inspired by a true story, The Danish Girl presented costume designer Paco Delgado with a unique dilemma. Not only did Delgado have to design costumes for a unique time period (Europe in the first decades of the 20th Century). He also had to design costumes for both a male married artist named Einar (Eddie Redmayne) and the woman that Einar transitions into being. The film chronicles the main character’s journey into becoming a trailblazer in the transgender community.

According to TheWrap.com, Delgado said he “tried to find a lot of fabrics that were real fabrics for the period, in antique shops and in markets and we also bought antique dresses that we used just for the fabric.” In crafting the costumes for the period, “they found inspiration from designers such as Jeanne Lanvin and Coco Chanel, and from paintings by the real-life character Vikander plays in the film.”

Einar only becomes aware of his true gender identity when he tries on women’s clothes and that’s only part of the reason why the clothing choices and costume designs of this film play so integral a part in this powerful story.

Of the five films on this list, Mad Max: Fury Road is the only sequel. Set in the apocalyptic future, the film continues the story the story of the title character, who was previously played by Mel Gibson and who is played here by Tom Hardy. Here, Max forms a partnership with Furiosa (Charlize Theron), a woman who is leading the fight against a monstrous dictator.

To continue Max’s story, Beavan brought concepts from the original films into her designs but she also developed her own distinct look. According to the Los Angeles Times, Beavan used “mood boards” and “collages” to develop the looks of the characters. She noted that she uses “the collages as a starting point to explore possible looks.”

In an interview with the paper, she added how costume choices can truly help an actor see a character come to life. “Sometimes fittings can get quite emotional when an actor 'finds' the character through trying on the clothes,” she said, noting how “wonderful” it was to be in the room when director George Miller “saw his Furiosa for the first time.”

Set in the wilderness in the 1820’s, The Revenant focuses on the journey of Hugh Glass (Leonardo DiCaprio), a frontiersman who is left for dead after being attacked by a bear in the wilderness. In the feature, Glass struggles to survive alone in the woods as he faces both warrior adversaries and the elements.

Glass’ costume was chosen in part to show the character’s relationship with nature. “Glass is in a beaver hood,” West told us in an interview, “which almost looks like a monk’s hood.  He communes with nature, you feel he talked to animals, and when he shot animals, he only took them for survival.”

His outfit, which is ripped apart and damaged throughout the character’s arduous journey, reflects an appreciation for nature that the other characters don’t have. It’s a testament to West’s work that the character of Glass — who is voiceless for much of the movie — is quickly established through his wardrobe choices.