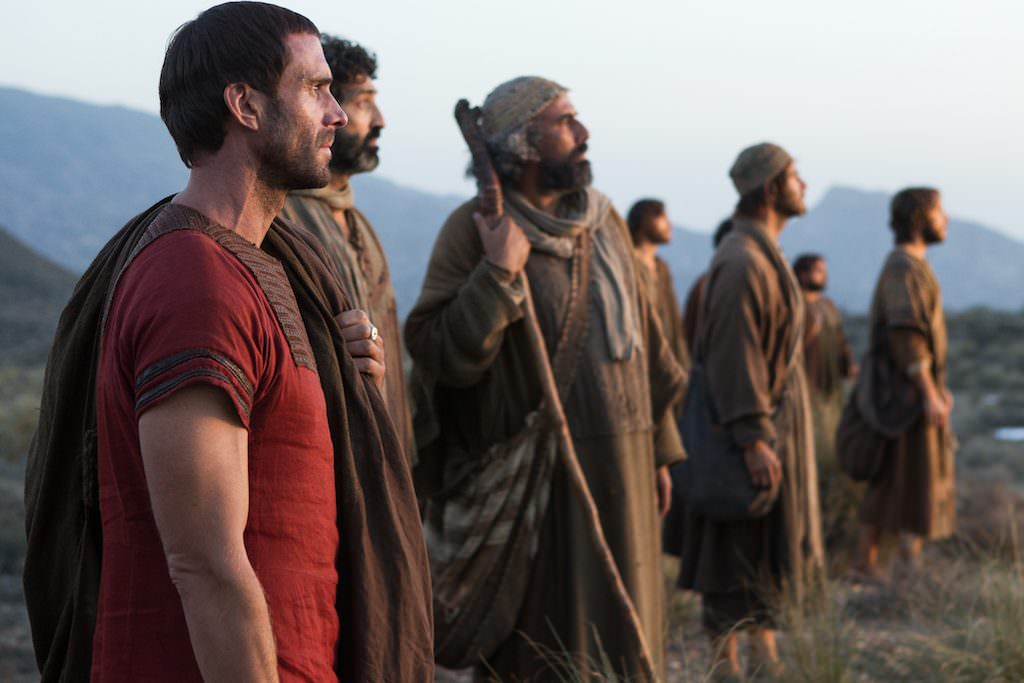 Jesus Returns (Again) to the Big Screen in Risen

Another year, another dramatic Bible rendering. The latest in a pantheon of Jesus film depictions, the movie Risen opens on February 19, dramatizing Christ’s crucifixion and resurrection. The action is seen through the eyes of some of the bad guy Roman non-believers, Clavius (Ralph Fiennes) and his assistant, Lucius (Tom Felton), who are tasked with finding out where exactly Jesus disappeared to after crucifixion. More action than spiritual reflection, many red paludamentums are angrily swung around during the sturm and drang that ensues in the hunt for Christ’s body. Typical of the contemporary action-adventure drama, actors tend to keep their own accents, so the Romans hot on the resurrection trail sound like they went to Eton, with an occasional light Scottish brogue cropping up, while other characters add a sprinkling of Italian and midwestern American accents to this mix. At least no one is blond.

The material, however, is unusual for its point of view, with the Romans at the helm. The last major film depiction of Christ was Mel Gibson’s most un-Christ-like The Passion of the Christ.  Like Risen, the film was more action movie than spiritual reflection, but unlike Risen, that violent, racist film focused on the moments before and the crucifixion itself, seemingly for the sole end goal of maximum brutality.

While Gibson seemed to be out to court controversy with his movie, he was hardly the first to attract it over a big-screen Bible rendering. Many audiences were opposed to The Passion of the Christ for its total exclusion of the poetic aspects of the last days of Jesus Christ and not so well-hidden hidden agenda, but it hardly lead the way in courting controversy in this genre.  In 1988, Martin Scorsese’s The Last Temptation of Christ was met with notable Christian outrage for its realistic portrayal of Jesus Christ as a man with human temptations — most problematically, sex. The film was critically well-received, however, as was Willem Dafoe in the role of Jesus. (If you haven’t yet seen it, of particular note is Pontius Pilate, who was played by David Bowie).

Jesus does get taken religious-level seriously and given reverential on-screen treatment from time to time, of course, though the results have been known to be snoozefests. The most well-known of these efforts is likely the over-three-hours-long odyssey that is The Greatest Story Ever Told (1965), which offered a near blow-by-blow version of the full life of Christ. It did help out Swedish actor Max von Sydow, who played Christ, on the map, while the rest of the cast was rounded out by bigger stars, including John Wayne as a Roman captain. So for less reverent viewers unlikely to remain enthralled by this behemoth of a film, there’s some miscasting by which to be amused.

Better-received by audiences a decade later was the six-plus-hours miniseries Jesus of Nazareth, a 1977 Italian-British co-production that likewise dramatized the full spectrum of the prophet’s birth, life, death, and resurrection. Like The Greatest Story Ever Told, it featured an all-star cast, including Anne Bancroft as Mary Magdalene, though thanks to its more natural approach to the New Testament, and humanistic portrayal of Jesus, the series fell prey to a degree of Christian controversy.  However, the (white, yet again) actor Robert Powell incidentally came to be considered the Christ to end all movie Christs for some time, thanks to his flowing brown locks, gaunt cheekbones, and wide, unblinking blue eyes conveying equal parts deep reflection and spiritual pain.

But where would this list be without a shout-out to one of the most well-loved films of all time about this particular biblical period? Risen will entertain, and deserves credit for its unusual point of view, but for an alternate look at the time surrounding Christ’s life, one must see a very different film likewise sidelining the Messiah for other characters. Monty Python’s Life of Brian, a classic for 37 years and still going strong, features a Jewish boy named Brian, a contemporary of Jesus accidentally mistaken for the prophet, starting with a visit by the three wise men to the wrong manger.  With this spoof at one end of the spectrum and Risen taking a place pretty much at the other end, thanks to his ongoing depiction on screen, the class of films devoted (no pun intended) to Jesus Christ offers something for every level of believer and non-adherent.