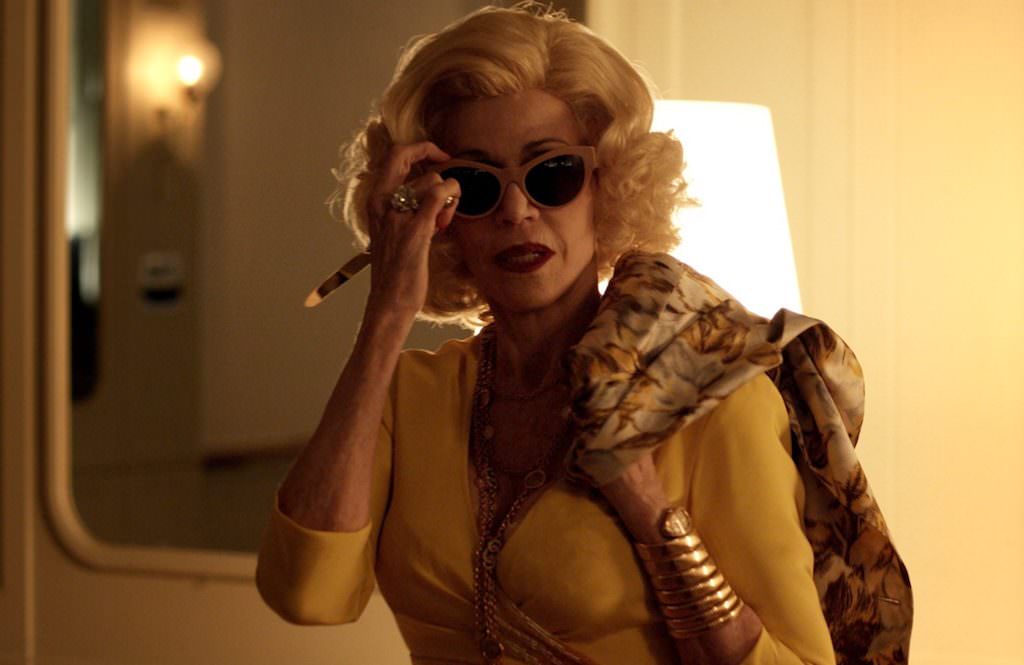 Jane Fonda Honored With The Coolidge Award for Excellence in Film

After a career spanning 1960 to the present, Jane Fonda may be entitled to be called an icon or Hollywood royalty. But when the two-time Oscar winner, author, heath and fitness entrepreneur, activist and humanitarian was in Boston recently to be feted by the independent, non-profit Coolidge Corner Theater, she was the opposite of regal.

Yes, Fonda dressed in elegant, bejeweled black and exuded a classy professionalism. But she engaged with audiences at a fundraising dinner and at  a screening of her latest film Youth,  did an hour-long, one-on-one interview from the theater stage at the awards event, and generally seemed to enjoy mixing with admirers and journalists as she answered questions ranging from from her own movies to politics to aging.

Fonda was honored with The Coolidge Award for Excellence in Film, which has been given out periodically since it was launched in 2004. Past winners include Meryl Streep, film editor Thelma Schoonmaker, and Viggo Mortensen. Fonda made it clear that she wasn’t doing all this because she needed another award; she was there to support the Coolidge, a beloved art deco palace that years ago was saved from demolition and has emerged as a major New England arts institution.

“I spent 20 years in Atlanta, which is home to the Fox Theater,” said Fonda. “It’s an extraordinary, historic building that was going to be torn down and which was saved, so I know what it means to preserve a place like the Coolidge. It’s easy to see movies at home but movies are a social event and I like to go to beautiful theaters.”

Fonda appeared onstage for sit down, wide-ranging, informal talk with Boston public radio host Margery Eagan. It began with a clip reel of Fonda’s career highlights spanning the early 1960s to her current Netflix original series Grace and Frankie, which returns May 6 for a second season. Pre-production on season three already is underway.

Fonda said she’s still surprised by the wide appeal of Grace and Frankie, about two very different women — uptight Grace (Fonda) and hippie Frankie (Lily Tomlin) — whose lives are upended when their husbands, played Martin Sheen and Sam Waterston, announce that they’re a gay couple. Fonda assured the crowd that season two is even better than the debut season, and that audiences will see a deepening friendship between Grace and Frankie. One of the reasons Fonda wanted to star in the series, she said, was “to give a cultural face to older women.”

She revealed that besides her work on Grace and Frankie, she will soon start shooting the movie Our Souls at Night with friend and frequent co-star Robert Redford. Fonda says their 1967 film Barefoot in the Park remains one of the most cherished experiences of her long career.

But picking a favorite role is a bit like picking a favorite child, she said. She’s proud of Klute, the seminal 1971 thriller for which Fonda won an Oscar for her starring role as a disillusioned call girl. She had great chemistry with director Alan Pakula; they would reunite for Comes a Horseman (1978) and Rollover (1981).

She also cited Coming Home (1978) as “the first film that came out of my head after working with veterans and active servicemen.” It earned Fonda her second Oscar.

The character she most liked playing was Gertie, a woman who leaves her rural home in Appalachia with her family for the factories of Detroit, in the 1984 TV movie The Dollmaker. Fonda for 12 years shepherded Harriette Simpson Arnow’s 1954 novel of the same name to the screen. The critically lauded film, first broadcast on ABC, earned Fonda an Emmy Award.

Perhaps the movie closest to her heart is On Golden Pond, the 1981 father-daughter story that Fonda produced for her own father, screen legend Henry Fonda. Fonda enthralled the crowd with stories about her prickly relationship with the film’s other famous co-star, Katherine Hepburn.

“Her first words to me were. ‘I don’t like you,’ Fonda said of Hepburn to gasps and laughs from the sold-out crowd. She said Hepburn pointedly asked her whether she was going to do the backflip into the pond as was written in the script. Fonda told the audience that she had not planned to; a stunt double had already been hired. But she recalled that she was so intimidated by Hepburn  — who famously did all her own stunts in her films — that she said she was indeed doing the backflip. Fonda worked with a trainer at the Maine pond where they were shooting. One day, she spotted Hepburn peeking at her from the bushes. When she finally nailed the flip, Hepburn cheered.

Such supportive moments were rare. “But she knew that until I died, I’d be talking about her,” Fonda said.

Fonda also shared anecdotes about another screen legend, Marilyn Monroe. They met when both were students at the famed Actor’s Studio run by Lee Strasberg. “She was like a child,” said Fonda. “The key to understanding Marilyn is that she was sexually abused. It changes everything. As happens with those who are sexually abused as children, she was infused with a sexual energy that made men tremble when she walked into a room but she was very scared and fragile and vulnerable and broken from the get-go. She did not feel safe in the world. She always liked me because I was also scared and fragile and vulnerable. My heart is filled with her.”

At the close of the interview, Eagan asked how she’d “like to be remembered.” Fonda quickly retorted, “I don’t care.”

Her legacy, she explained, isn’t as important to her as living in the present and making the most of each moment. It’s something she learned growing older, she said; she didn’t always have such a positive attitude about aging.

“I was so old at 30 — in my soul and mind. I am 78; my body is failing me but I feel young on an energetic and spiritual level,” she said.  “I left the business for 15 years. I was done and I had no regrets. When I finished [my autobiography] My Life So Far, I thought I could enjoy acting again. I never imagined I’d recreate a career at 65; it’s unheard of. I’m 78 and I have a full time job!”

For the first time in 50 years, she hired an acting coach to help her with the demands of a television series. Colleagues wondered why a two-time Oscar and Emmy winner needed instruction. “You can always get better,” said Fonda. “You can always learn more.”