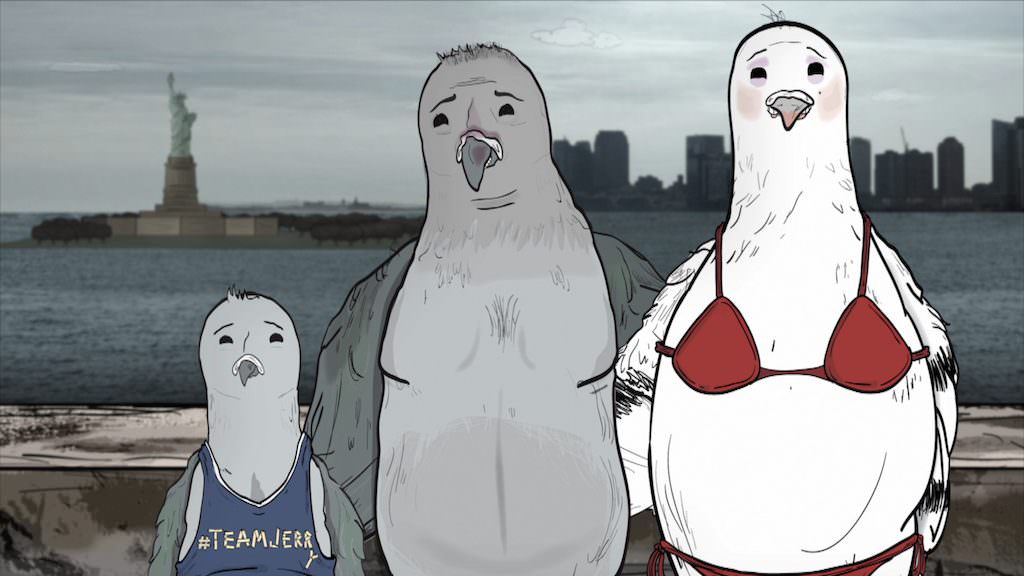 The Duplass Brothers, Mark and Jay, are on fire. The second season of Togetherness, the brothers’ hit couples-centric dramedy (drama-comedy) television series for HBO, will premiere on February 21 – starring Mark. Jay can be seen in the critically acclaimed, Emmy nominated Amazon Prime Original comedy-drama series, Transparent.

Last week their “Duplass Brothers Production” released the trailer for what will certainly be their next success, the edgy animated series – Animals.

Animals, was created by New York advertising creatives Phil Matarese and Mike Luciano, and “focuses on the downtrodden creatures native to Earth’s least-habitable environment: New York City. Whether it’s lovelorn rats, gender-questioning pigeons or aging bedbugs in the midst of a midlife crisis, the awkward small talk, moral ambiguity and existential woes of non-human urbanites prove startlingly similar to our own.” (HBO)

Phil Matarese and Mike Luciano developed Animals as a series of animated shorts; each focused on a particular and much maligned creature. The inspiration for the series came from a pair of pigeons across from Matarese and Luciano’s office. “Pigeon,” their first of the series, earned them trips to SxSW, the Palm Springs International ShortFest, and the comedy prize at the 2013 New York Television Festival.

The Duplass Brothers debuted early cuts of the series at the 2015 Sundance Film Festival. Last week, they returned to Sundance with the first two episodes of the 10-episode first season. Animals was offered a second season back in May.

Episode One: “Rats” will premiere this Friday, February 5 at 11:30 PM on HBO and will be available on HBO NOW, and HBO GO.