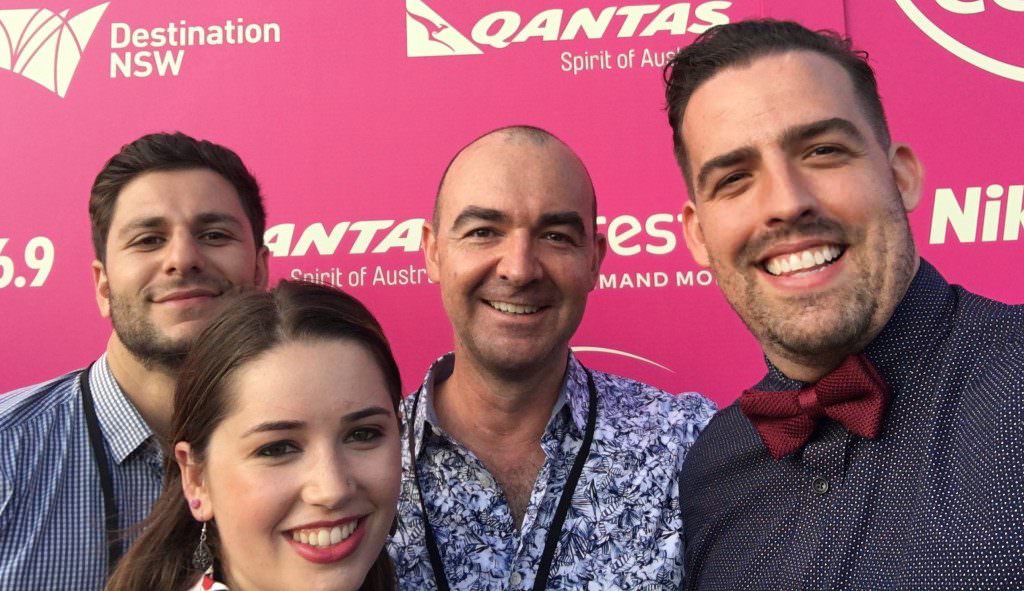 Filmmaker Antonio Oreña-Barlin on Why Short Films Are Crucial

This article originally appeared on MPA-i.org. It was written by filmmaker Antonio Oreña-Barlin, about his film Drawcard and the experience of showing it at Tropfest, in Australia. You can check out the film here.

"My day at Tropfest Australia and why making short films doesn't mean getting short changed."

Late last year, the Drawcard team found out we were one of only 16 finalists from over 600 entries selected to screen at the 24th annual Tropfest. A week later, to our white privileged horror, we found out that Tropfest had been cancelled and our celebration turned to dismay. It was akin to cancelling Christmas, Hanukkah or even Festivus. Thankfully, several weeks later, the gods of film smiled upon ‘Tropfestivus’ after a last minute bail out by CGU Insurance (shameless plug, but a point that will be important later).

After we found out that Tropfest was back on, we were elated that around one hundred thousand people would see our film live at Centennial Park as well as many other thousands via television simulcast and on the net in the months to come. Like everyone else, we’d slaved hard on our passion project and were thrilled at the prospect of high profile judges such as Mel Gibson and Simon Baker seeing our film.

Our team had a great experience at Tropfest itself. It is a huge event, like a cross between a music festival and an outdoor film festival – there’s nothing like screening your film live to around 100,000 people. Despite an electrical storm and rain that threatened to empty the field just before half time, most people hung tough and were rewarded with the second half of films. It was a massive relief as our film was last – and I’d had a bitter experience 11 years before where a previous film had been singled out for torrential rain and the judges hadn’t even seen it as they were dodging the downpour.

It’s an exhilarating and terrifying feeling when your film comes on, you hope that the sound is okay, you wonder about all of those little details and compromises and hope no one else notices. I think the degree of anxiety is also in relationship to how diligent you were – how confident you can be to stand by the work.

Having been a director for 15 years and a guest lecturer at AFTRS, I’ve often been asked to give pointers to young filmmakers. A few things that are crucial:

We’d all like to think that we’re wonderful, talented and amazing all by ourselves, but it’s rarely the case. Collaboration is one of the most valuable things that’s necessary to create films and as the wonderful end result of filmmaking. It’s so important to get your people around you – your director of photography, writers, designers, wardrobe, editor, etc. Embrace all of your partners in crime that are going to help you realize your vision – you can’t do it without any of them. Once you have your team, listen to them, great ideas can come from anywhere; don’t be so arrogant to think that you are the sole custodian of brilliant ideas.

Don’t compromise… until you have to.

It’s an unwritten law of filmmaking that compromise permeates everything you do. Budget, location, hours in the day, physical impossibilities… all of these things and more are trying to ruin your film. You must be a diligent and painstaking guardian to protect your film from all of these things. Experience, intuition and your team will help decide where you must draw the line. It’s your job to make sure that whatever compromises you concede are the ones that impact the film and your team the least. Push too hard one way and you break people and the budget/schedule; if you don’t push hard enough, you will have a film you are too embarrassed to show anyone. The sweet spot is the gap between perfectionism and physical realities, go either side of this and you’re in the danger zone… and not in a good Top Gun/Tom Cruise/Kenny Loggings kind of way.

A lot of people like to sit back and have a whinge about the opportunities that weren’t given to them, when they haven’t asked themselves what they’ve done to cause the outcomes they want. The way technology has evolved has made filmmaking accessible in an unprecedented way, look at films like Tangerinethat was shot with iPhones, got a premiere at Sundance and a cinema release PLUS they made a profit!

For me, it’s about finding that idea you just can’t stop thinking about, driving it and really doing the work so you can get the resources to make your film. Get your story; be creative in finding the solutions to your ‘boring’ production problems (this is probably the biggest component of a Directors’ work). It’s possible; you just have to solve the puzzle.

Also, you need to be doing it for the right reasons, not just to get famous.

Part of the art of putting a film together is looking at the business model, no matter what your budget is. Many people make short films expecting no returns, the creative process is its own reward and learning is often short films’ raison détre. However, you can make money from short films and, ideally, if you’re reading this, you want to make a living from your creativity.

Problem is, these days, people expect to be entertained for free (for the most part) and what happens when, inevitably, the business model fails to support that?

In those weeks when we thought Tropfest was cancelled, I kept thinking of the constant tension between commerce and art. Here were hundreds of thousands of eyeballs watching films at a free event – logic dictates that someone’s got to pay for it at some stage. This tension between a passion project turning into entertainment and then economics needs to fit into that equation to make things happen.

Tropfest is a massive event and requires a great deal of organization, equipment, services and infrastructure to enable that to happen. It occurred to me that what happened to Tropfest during those despondence inducing weeks of purgatory was not just a single unfortunate event but was symptomatic of a broader malaise in our industry.

Many creative people don’t like to think of themselves as salespeople or businesspeople – almost as if they are the antithesis of creativity. I prefer to think of sales as gaining people’s co-operation and business as a way of making sure you have the appropriate resources to make your film; plus it’s also a way of giving you an income so that if your film is successful, you have a passive income – no matter how small – to invest in yourself or to put into your next project. Thinking in these terms gives you a sustainable perspective to see if you can make a living from your filmmaking rather than treating it as a hobby.

If I want this for myself, then reciprocity dictates I give that to others, which is why I always pay for films, TV and music. Many of the people that I’ve seen ‘freeloading by downloading’ over the years have, ironically, been professionals in the industry. These artists expect to go home with a paycheck but don’t value the industry enough to pay a modest fee for the many millions of dollars worth of product that they consume. These dollars go towards supporting their own colleagues and industry. I find it frustratingly shortsighted.

We are so lucky that the scale of the filmmaking medium affords us the privilege to watch a $200m film for only $5 – $15 (depending on whether you rent it or go to the cinema). Run the numbers on that, it’s a great deal for the consumer. It’s even less if you’re on Netflix where your monthly subscription is amortized over how many films you watch.

If Trop had been cancelled, it kills off over 600 new films being made, people gaining that experience, having the excuse and the deadline to experiment, the chance to form their teams. So this is why I mentioned CGU insurance earlier as that company (and all of the other sponsors) helped prop up… who? ‘Us’ is who and the thing we love – film. It’s not selling out to big business, it’s just not being naïve about how things work. We need sustainable business models for any of this to happen – that extends to the small scale business model of needing $500 to make a short film through to funding a $250m film.

We can all do our bit to give ourselves an industry to be a part of. We can do that by valuing our work and others’ by a fair exchange.

“I’m going to watch your film that you spent thousands or millions of dollars on, here’s a few bucks to make sure the wheels keep turning.”

Antonio is a screenwriter, director and the co-founder of CGI studio & production company, ROTOR STUDIOS, which specializes in photo-realistic 3D lighting, animation and visual effects. He is also a partner in CHEEKY LITTLE, a company that creates unique entertainment brands for kids with a special focus on CGI character animation. Antonio’s last short film, DRAWCARD (view here or here) was a finalist at Tropfest 2016 and his previous short, SUBURBIA (view here), won multiple international awards, was nominated for an AFI/AACTA Award and was in Official Selection at the Sydney Film Festival Dendy Awards, St Louis Int’l Film Festival, Flickerfest & Foyle Int’l Film Festival, to name a few. His long-form slate includes feature films and television series.