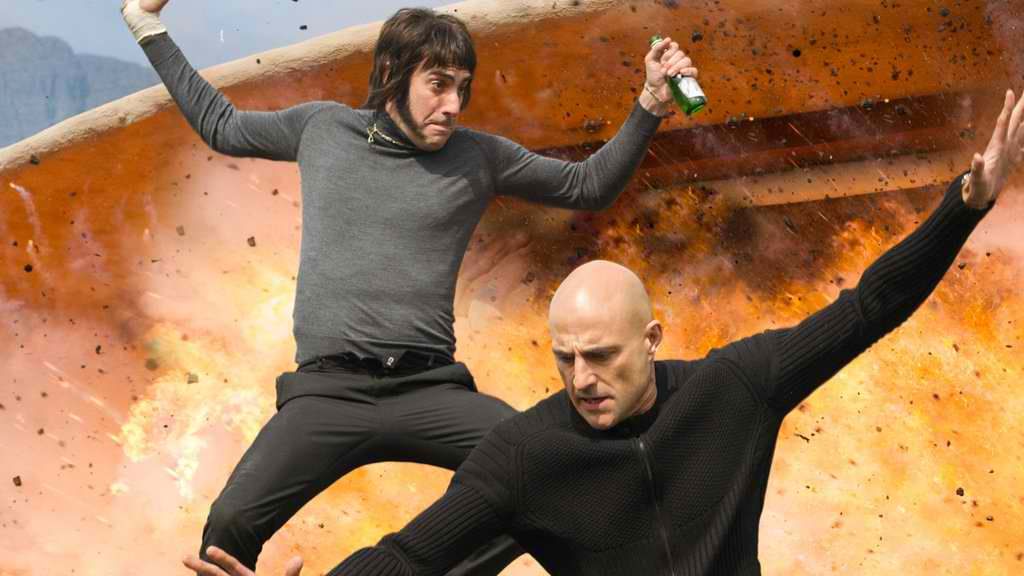 The Comic Anarchy of Sacha Baron Cohen and The Brothers Grimsby

A few months ago, Sacha Baron Cohen’s long-retired Borat dropped by at Jimmy Kimmel Live, showing off his famous comic chops and eliciting ecstatic whoops from the studio audience. The occasion for the visit? Baron Cohen’s newest film, an action comedy called The Brothers Grimsby, which promises to introduce a new charming misfit to the unsuspecting public: Nobby. But before we talk about the film (and the lovable Nobby), let’s look back at the comedian’s tradition of outlandish antics and inspired character pieces.

Sacha Baron Cohen is no stranger to outlandish tactics. Beginning in the late ‘90s, Cohen devised the satirical character of Ali G, a hip hop star and “voice of da youth” with an inflammatory sense of humor and lack of self-awareness, and appeared on Channel 4’s The 11 o’Clock Show. The character struck some as so interesting as to spawn his own series, Da Ali G Show, which aired both abroad and on HBO in the U.S.

On the show, Cohen played three different journalist characters: Ali G; Borat and Bruno to interview real, unsuspecting people about various controversial topics like feminism, politics and religion and spawning plenty of cringe comedy in the process. Fittingly, each of the characters would go on to inspire their own feature films, all featuring Sacha Baron Cohen as the lead.

The first feature film, Ali G Indahouse, was the only one of the three films to be shot as a fiction venture rather than a mockumentary and centered on Ali G unwittingly becoming a pawn in a plot to overthrow the Prime Minister of Britain. The film was a marginal success in the U.S., but it wasn’t until Borat that Sacha Baron Cohen really broke into the American zeitgeist.

Borat, or rather, Borat: Cultural Learnings of America for Make Benefit Glorious Nation of Kazakhstan, was a wonderfully strange but nonetheless undeniable cultural juggernaut. A mockumentary centering around Borat Sagdiyev, a television reporter in Kazakhstan and the nation’s “sixth most famous man” set on creating a documentary about American society and culture. During the course of filming, Cohen left moats of controversy in his wake. Not only did the real nation of Kazakhstan quibble about their representation, but what was more bewitching about the feature was how unclear it was whether parts of the film were real and faked (most, shockingly, were quite real). Unsurprisingly, Baron Cohen quickly became one of the breakout stars of the year, and his devilish sense of humor helped to cement him as one of culture’s great tastemakers.

But shortly after Bruno wrapped, Sacha Baron Cohen issued a public statement to reveal his official retirement of his beloved characters. “It’s like saying goodbye to a loved one,” he said of his retired comic personas. Since then, the man of many faces has continued to carve out new characters, as with his often provocative Admiral General Aladeen for his 2012 film The Dictator, employing the same kind of comedy-cum-performance art that originally launched his career as an eccentric despot whose sympathies for Osama Bin Laden and penchant for nuclear weapons ensured that he would be headline news.

Certainly he was, but in the last four years, Baron Cohen has been surprisingly quiet, appearing in traditional roles in large-scale films like Les Miserables and Anchorman 2. Of course, considering Cohen’s 2010 marriage to Isla Fischer and three subsequent children probably have something to do with his return to apparent normalcy.

But never fear, the nation’s most outlandish comedian hasn’t gone soft with parenthood. Cohen is back with Nobby, the start of The Brothers Grimsby, which features action megastar Mark Strong as his comedy foil and sees Louis Leterrier, stylish helmer of The Transporter series and Now You See Me at the reins. Norman “Nobby” Grimsby” is a resident of the poor fishing town of Grimsby, father of nine children and husband to the love of his life. Mark Strong appears as Nobby’s long-lost brother Sebastian, but while Nobby has carved out a nice life in the town where he grew up, Sebastian has honed his skills to become the nation’s top MI6 agent.

While previous Cohen adventures have been a singular affair, with the comedy mastermind being treated to much of the attention, The Brothers Grimsby promises a dynamic comedy duo between Strong and Cohen that could make for one of the best action comedies of the year. The supporting female characters promise laughs aplenty with Rebel Wilson appearing as Nobby’s devoted wife and Gabourey Sidibe as Nobby’s object of seduction. The script, which was written by Cohen along with long-time collaborator Peter Baynham also features a credit for Phil Johnston, whose Ed Helms vehicle Cedar Rapids signals a sweet but raunchy sensibility that should play well against Cohen and Baynham’s goofy hijinks.

As the film prepares to open, Cohen has begun to appear as Nobby at press events, arriving at the UK premiere of the film in Nobby’s impressive sideburns and wearing a dressing robe over his turtleneck and chain, as the rest of the cast ate fish and chips on the red carpet. Nobby also completed an interview at BBC1, where he discussed his Michael Jackson impression and explained his fear of becoming famous (“…They’re going to be asking for me autograph, and I’m very worried. mainly because I can’t write,” he confides to the interviewer). The town of Grimsby, which refers to the real life Lincolnshire fishing village, is already bracing for the impact of the film in fear of a similar treatment that Kazakhstan received, but if there’s anything we must have learned from Sacha Baron Cohen over the years it’s that you can never take him too seriously. If you do, you may just miss the joke.