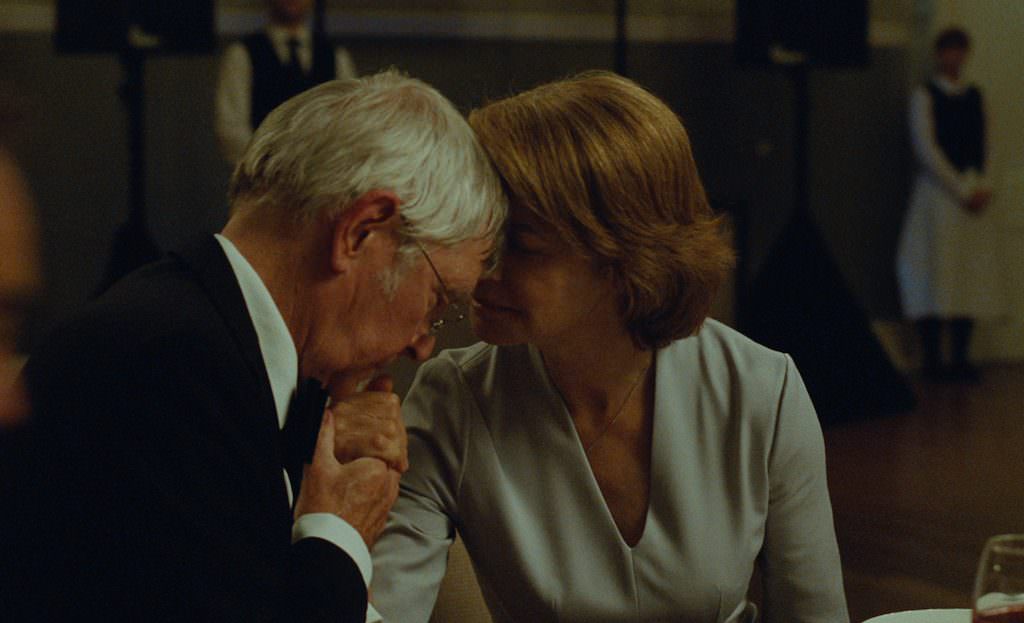 Writer-director Andrew Haigh jokes that his new film 45 Years is a sequel to Weekend, his 2011, intimate look at a hookup between two young gay men that develops into more. Sure, 45 Years is about a long heterosexual marriage between Kate and Geoff Mercer (Charlotte Rampling, nominated for an Oscar for her performance, and Tom Courtenay) but it’s still about the nuances, complexities, and tensions of a relationship — no matter its duration, no matter the couple’s gender.

“I really see them as bookends of the same story; a relationship is a relationship,” says the Britain-born Haigh. “I’ve been with my partner for 10 years. My philosophy going into it was [that] you obviously get wiser and learn more things as you get older, but you stay fundamentally the same person. I’m not that different from when I was 28 in terms of my fears, doubts, concerns, desires for connection and self-worth. So I kind of approached it just thinking about what it’s like for me in relationships, and took it from there which I hoped works because it made it feel real and lived in.”

Haigh based 45 Years on the short story "In Another Country" by David Constantine, but shifted the focus to retired teacher Kate’s point of view. It opens with Geoff receiving a letter informing him that his former girlfriend, who fell to her death while they were mountain climbing in Switzerland before he met Kate, has been discovered preserved in ice. The revelation that a woman Geoff loved in his youth is now frozen in time throws the marriage into crisis five days before Kate and Geoff’s 45th wedding anniversary party.

Haigh, currently living in San Francisco where he has been working on the gay-themed series Looking for HBO, was very conscious about casting two giants of British cinema.

Courtenay first captured attention in Tony Richardson’s The Loneliness of the  Long Distance Runner (1962), arguably the best of the British “angry young man” films. His long list of screen credits include his Oscar-nominated roles in Doctor Zhivago (1965) and The Dresser (1983). Rampling’s star rose a bit later, first in an uncredited role in The Knack… and How to Use It (1965) then in a pivotal supporting part in one of the swinging ‘60s definitive films, Georgy Girl (1966). While Courtenay took a break from films to pursue theater — he’s played all the great roles from King Lear to Uncle Vanya — Rampling did some of her best work later on: The Verdict (1982); Under the Sand (2000); and Swimming Pool (2003).

“When I made Weekend, oddly, my reference point was Saturday Night and Sunday Morning,” says Haigh. “Albert [Finney’s] film is totally different but to me there was something about a desperately angry [man] trying to define himself against the world. I love that period of British cinema. You had working class heroes, which was fantastic, and I feel like now that doesn’t happen. These films had strong, determined, intelligent men who were working class.”

Haigh’s stars had long ties to the British New Wave but even though they were contemporaries, Rampling and Courtenay had never worked together.

“If they had, that would be too much cinematic past,” Haigh says.

“When we started the film and knew we were going to cast known actors, [I knew] everybody was going to think of their past roles, which is a lovely thing. When Geoff is telling Kate about how they used to go dancing in the old days and [he’d] have a cigarette in his mouth, I am imagining The Loneliness of the Long Distance Runner and him being that person with a strong belief system and sexy and vibrant and full of life. With Charlotte, if you cast someone with a different cinematic past, maybe they just been in television or something, it would have had a different effect.”

Haigh may be just 42, but both Courtenay and Rampling were impressed by his insight into relationships and his honesty about sexuality. When was the last time a movie depicted intimacy between 70-somethings, not for laughs but as a major plot point?

“Sex in a relationship is usually an attempt to reconnect,” says Haigh. “You hardly ever see that in films. It’s usually affairs, or at the beginning [of the relationship]. What about when you’ve been together for years and have sex once a month, if you’re lucky? I love seeing slightly older bodies having sex. I don’t understand why we’re so desperate to stay young. An older body is just as attractive; it’s just different attractiveness. People are so strange about those things. They’re so terrified of their own aging and death that they refuse to want to watch anything like that.”

Rampling has never shied from nudity of sexuality on screen even as she’s grown older. But she welcomed a fearless portrayal of all aspects of a marriage, including a sexual relationship. Surprisingly for such a long career, Courtenay says he’d never done a sex scene and relished the chance. “I loved it. I had a ball. It was not at all gratuitous; it was about them trying to recapture their youth,” he says. “Rex Reed wrote that ‘Tom and Charlotte are still sexy.’ I told Andrew, ‘better to still be sexy than to have done a masterpiece.”