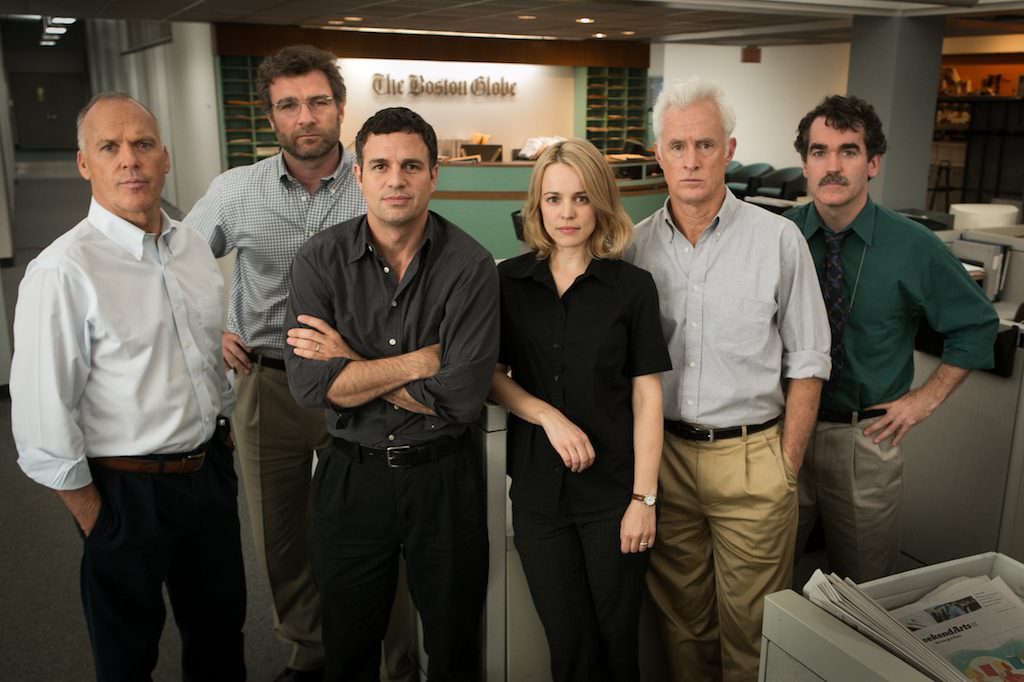 People pour over files, excel spreadsheets, and names in a directory. There's phone calls, and more phone calls, and some face-to-face meetings. There's a late hour knock on a nervous journalist's door, and it reveals…a colleague bearing a pizza. These are some of the things editor Tom McArdle was cutting when he worked on Spotlight, and in each instance, the scenes are thrilling. The film, centered on a team of Boston Globe investigative reporters who uncover a massive coverup of sexual abuse at the Catholic archdiocese of Boston in the early aughts, is a taut 128 minutes. Watching very good journalists do their job, even a job as crucial as the ones the 'Spotlight' team was tasked with, is not inherently cinematic. Yet the film's not boring for a minute. This is no doubt due in part to the great script by director Tom McCarthy and Josh Singer, McCarthy's direction, and the superb work of an allstar cast (Rachel McAdams, Michael Keaton, Mark Ruffalo, John Slattery, Liev Schreiber, etc.), but it's also because of McArdle's ace editing. We spoke with the longtime McCarthy collaborator about working on one of the year's most devastating films.

Did you discuss an approach with Tom McCarthy before you starting cutting the film in an effort to make the work journalists do look interesting?

I thought the script was very well researched and smart. The only concerns were to keep it interesting and keep it moving. It read, from the beginning, like a very strong script, and I was excited to get working on it. Tom and I didn’t talk much about our approach, however, we just thought we’d apply our usual process. Our initial concern was holding people’s interest.

You did that in spades. What was the process like?

I cut for ten weeks while they were shooting, and once that was done, Tom would take a couple weeks off and I’d show him the first rough cut. From that point on, Tom and I would work together. We screened the film every three weeks for a small group in the edit room, and we’d sit behind the group and get a feel for how it was playing and gauge if people were locked in or not. Then afterwards we’d get their feedback and ask if they were following information, and we’d repeat this process every three weeks for five and a half months.

Any specific notes you kept getting?

We’d hear about issues repeatedly, and that's how you knew you had to do something about it. Like 9/11; the original sequence was too long and people felt it was taking too much time away from the investigation, so we cut a scene. There was some stuff that wasn’t clear about the documents, so we had [Mark] Ruffalo come in and re-record his dialogue to Michael Keaton to make it more clear. Dozens and dozens of little things to make it tighter and add more clarity.

Tell me about how you managed to make the bones of journalism, especially in the early aughts before smart phones and Google's global dominance, look so thrilling?

It all starts with the script, and then on top of that, you have these great actors who can make certain things seem interesting, and make it feel so real. The first stage is just making sure we have all the right pieces of their performances. And a lot of it is experimenting—we cut out five complete scenes, then we cut out fragments, which sometimes is just a line or two. If a scene feels a little too long, the viewer starts to fall off a little bit, and if you can avoid that by finding cuts, then great.  It's about finding a new place out of the scene to connect into the next scene, which then gives the film a little bit of energy. We took a journalistic approach—I think Tom and Josh had a great sense of taste in their original script, and Tom has a real reserved sense of taste in the edit.

Yeah, the insert of ‘sick leave’ was shot later, to give emphasis to that detail. Otherwise that was just the original coverage they got during the shoot, and it’s just great actors and great writing coming alive. I think everyone’s interested to follow the next step in the investigation.

Is it any easier, or harder, to cut an ensemble film?

I wouldn't say it's harder, it's just different.  It's challenging to juggle multiple characters. In a few places we tried to make sure we were giving certain people enough coverage. Like Rachel McAdams, giving her reaction shots to keep her at the same level as the others. She’s just such a great listener, she’d be sititng there for a whole take listening and giving you great reactions. In general, at the beginning, the fact that there’s so many great actors, it was sort of invigorating. Beyond the main Spotlight team, one day I’d have Billy Crudup and the next it would be Paul Gilfoyle, and the day after that there would be Stanley Tucci.  All incredible actors

Do you have any favorite sequences?

A scene I really like is late in the film, with Robbie (Michael Keaton) and Pete (Paul Gilfoyle) in the hotel bar, and Pete’s trying to convince Robbie not to run the story. That was Paul Gilfoyle’s first take, and all the way through he just nailed it. So did Keaton.

How much footage did you pour through?

We definitely had more footage in this because this shoot was a few weeks longer than Tom’s previous shoots. We filled up 5 terabytes of drive space. It was basically two different shoots—two weeks in Boston where they were running around getting exteriors, getting 60 shots a day, then they moved to Toronto where they had a set for whole newsroom floor and for the Spotlight offices. There they had more time, and more takes for a lot of those big dialogue scenes.  They would get multiple angles and sometimes they would shoot from both sides of the actors for eye lines.  There was a lot of coverage.