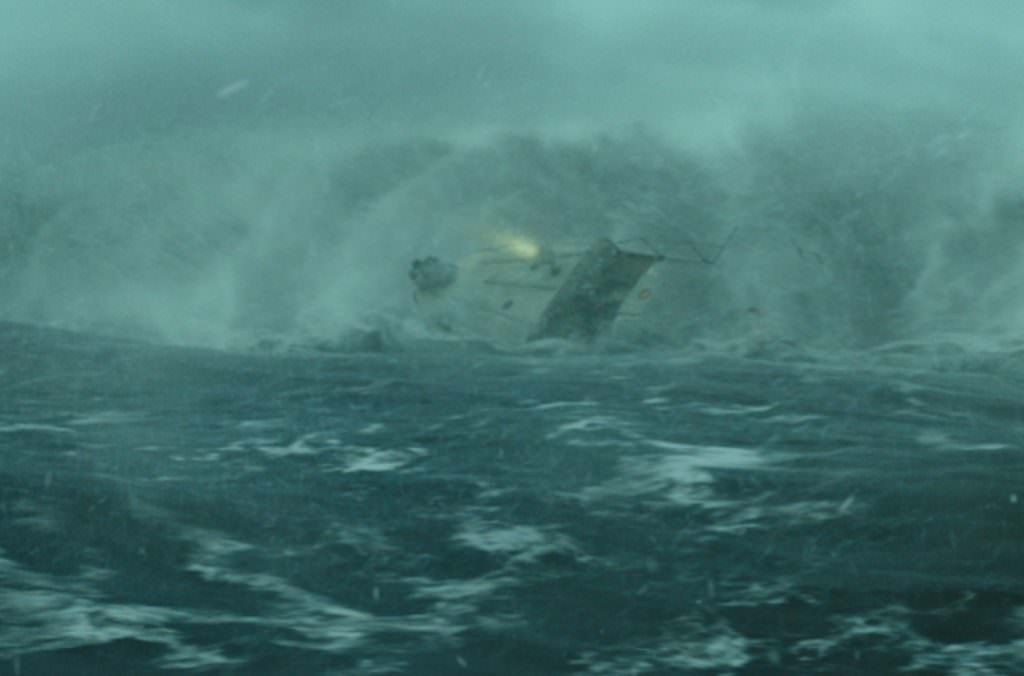 The Finest Hours tells the incredible true story of a daring rescue mission conducted by a handful of men from the Chatham, Massachusetts, Coast Guard when a huge storm struck New England on February 8, 1952. The storm ripped two 500-foot oil tankers in half, leaving their crews stranded at sea. Despite hurricane-force winds and 60-foot waves Bernie Webber (played by Chris Pine) successfully skippers a 36-foot wooden lifeboat, with a destroyed compass, to rescue 32 of the men left stranded aboard the SS Pendleton. It was important to the filmmakers to remain as faithful as possible to the actual events. Here are some ways they achieved that historical accuracy during production:

Filming in the actual locations

To recreate 1950s Cape Cod, where better to film than Cape Cod? Which is exactly what the filmmakers did, sticking as close as possible to the original locations. Production took place on stages built at the Quincy shipyards in Massachusetts and at locations along the coast south of Boston, including Marshfield, Duxbury, Cohasset and Norwell, and wrapped on Cape Cod in Chatham.

A particular highlight for the cast and crew was filming at the Chatham Coast Guard station where Webber accepted his daring mission in 1952. “There’s this great photo of Bernie and his men sitting at a table in the mess at the station that was taken that night after their return, and we filmed in that actual spot,” says Chris Pine in the production notes. “It was a very profound experience.”

As luck would have it, the actual CG36500 lifeboat that brought the men home to safety still exists and was recently restored by the Orleans Historical Society and Museum in Orleans, Massachusetts. The actors were able to take the boat out in Chatham harbor and get a small taste of what the Coast Guard would have been up against that night. 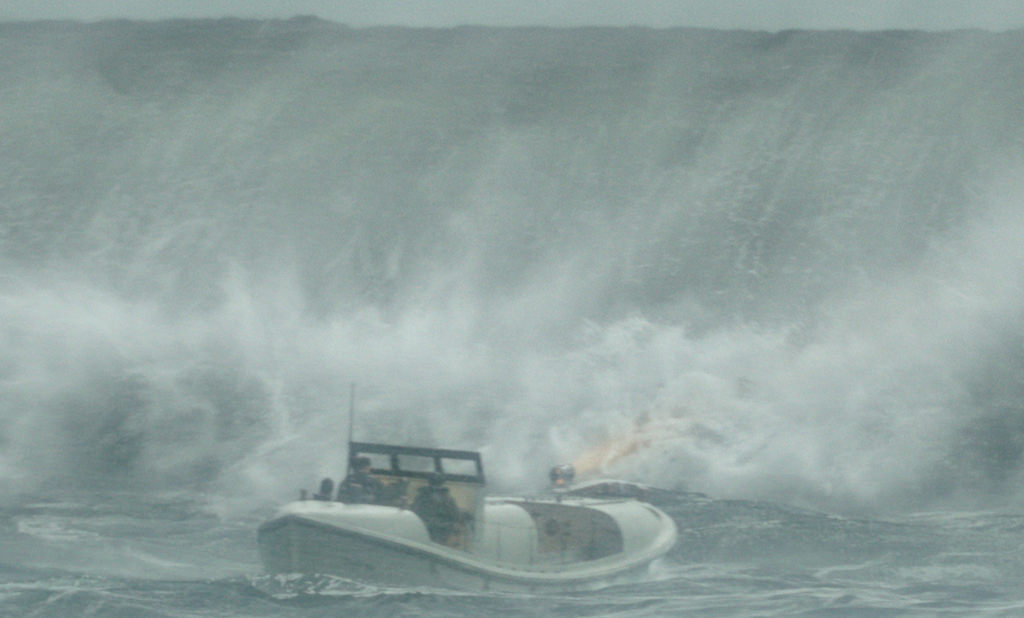 Unfortunately, the 40-odd year old vessel would not have been able to stand the rigors of filming, so alternatives had to be sourced. This was a challenge for the production as the lifeboats in the same style went out of service 1968 and most have disappeared. Eventually the filmmakers were able to source four authentic wooden alternatives for use in filming.

“Thirty-six feet sounds pretty big, but in reality it’s a postage stamp in the ocean,” says Michael Condon, executive director of the USS Salem, who worked as a technical advisor. “Designed to carry 12 people, including its four crew members, these small wooden lifeboats were created to withstand waves of water washing over them. They have a 2,000-pound keel and, should they be flipped over by a wave, will right themselves.”

The USS Salem, a decommissioned Cold War-era heavy cruiser that is now a part of the United States Naval Shipbuilding Museum docked in Quincy, Massachusetts, has a boiler plant and engines similar to those on the SS Pendleton. The production filmed in the ship’s engine room, diesel generator room and the port mid-ship’s passageway, again giving the actors a real feel for the actual surroundings of the Pendleton’s crewmembers on their ill-fated voyage. 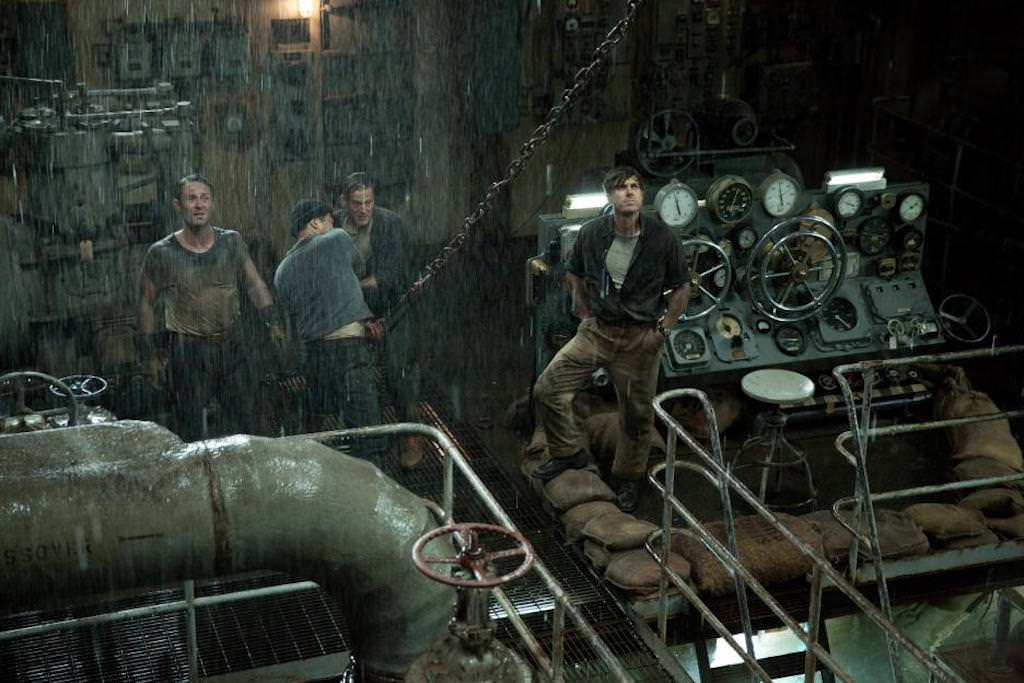 Inside the SS Pendleton, very similar to the USS Salem that was split in half during the storm. Courtesy Walt Disney Pictures.

Production designer Michael Corenblith studied archived materials and toured ships built with similar methods to the T2 oil tankers (including the Salem). As well as filming scenes in the Salem, his team constructed a series of interior sets of the Pendleton varying in scale, which were created in sections so the camera could move through each section of the ship. This included the ship’s galley, mess and crew quarters, the steering station, and the engine room. Actual parts from the Salem, including hatches and doorways, were integrated into the incredibly detailed sets.

With such attention to detail in place to create the historical framework for the film, the magic of movie-making did the rest of the work. A massive water tank was built at the shipyards, holding 800,000 gallons of water. Though around 30 per cent of the shots were filmed in open water, this gave production the ability to start and stop the waves, wind, rain and snow on command. “You would never be able to film in the ocean in a real squall…that would be absolutely impossible,” says the film’s marine coordinator Bruce Ross. “You have to be able to control the elements.”