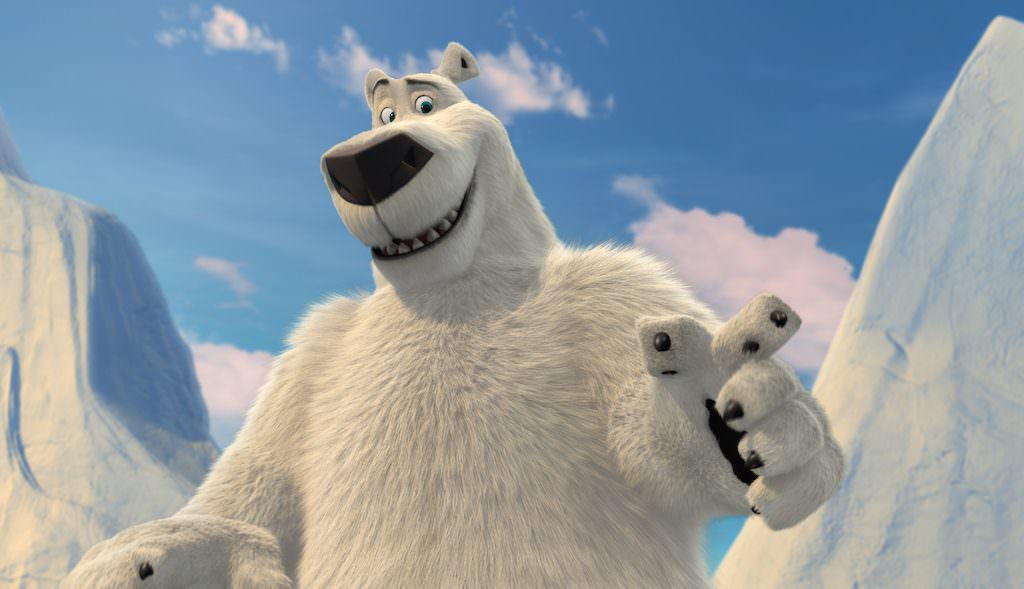 Norm of the North, the Next Great Socially Conscious Kids’ Film for Everyone

Norm of the North, which opened this weekend, is ideal for the season: a 3D cartoon for the bleak remainder of the winter, led by a friendly polar bear (Rob Schneider) on a mission to New York.  He and his trio of indefatigible, incoherent yet charmingly expressive lemming buddies aren’t headed to the Big Apple for cronuts, Times Square, or tickets to Hamilton, however, but for a more noble cause: to keep tourists and the development that comes with them, out of the Arctic.

Garrulous Norm, ready to party, gets plenty distracted by the city’s sights, but keeps himself mostly on track to confront a deranged, monomaniac evil developer who intends to build luxury condos in Norm’s pristine backyard.  In their fight against unwise development and unscrupulous big business, Norm and the lemmings aren’t the first cartoon characters to wage a topical, socially conscious battle over the course of a cartoon (ostensibly) for kids.

For the past couple decades, children’s movies have taken on a number of relevant causes, many of which, unfortunately, remain relevant today. In 2016, it’s a polar bear confronting wasteful, unecessary luxury housing for the rich. But in 1992, it was FernGully that brought home environmental destruction — likewise at the hands of big business — to the living rooms of young Gen-Xers and Millennials. More whimsical than the recent cartoons with a social conscience, the hero of FernGully was a magical fairy out to save her rainforest home from the duel foes of a logging company and an evil pollutant force named Hexxus. If the double x looks familiar, you might recall Hexxus was pretty much an anthropomorphized oil slick. Shout-out to Exxon-Valdez and 1989’s massive 1989 oil spill. Today, polling by Hart Research finds that 74% of American voters under the age of 35 say they would support a presidential candidate who sets a goal to achieve 50% clean energy by 2030.

Over the Hedge came out in 2006, fighting two different scourges: first, a merry band of mixed woodland creatures awakens from winter hibernation to discover a giant hedge blocking off half their former forest, now the site of developed-overnight suburban sprawl. Due to their newly limited terrain and the sudden arrival of a wily raccoon with a hidden agenda, who leads the besieged group over the titular hedge and into suburbia’s trashcans, the group discovers the delights of leftover junky human snacks galore. And with that, the turtles, rabbits, etc.,  experience not just the ill effects of deforestation and overdevelopment, but the weight- and lethargy-related fallout from extremely poor Western nutrition. (And if you count their being swindled by a con artist, the film effectively teaches its young audience about not just two but three distinct social issues.)  Today, soda sales have been in a slow decline for a decade, while McDonald’s, for the first time in its history, really isn’t doing too hot. Good job, woodland creatures, for eventually returning back to the other side of the hedge, to the healthful pleasures of the woods and a traditional lifestyle.

Two years after Over the Hedge, Ice Age: the Meltdown was released, a sequel to the first Ice Age, in which mammoths tried to outrun a glacial advent. This time around those same glaciers are melting. The cartoon’s protagonists confront this new problem of water, water everywhere, and while the parallel between prehistoric melting glacier and climate change today might not have hit home with the movie’s target audience, hopefully it wasn’t lost on their parents. The bigger cartoon crusader of 2008, however, was set in the future.  The titular protragonist of WALL-E is a lovesick robot, but his sweet story is set against a lonely backdrop of trash. Earth, long-abandoned by humans who left the planet covered in garbage (with a little help from a big corporation called Buy N Large), finds the last living plant. But so does a reconnaissance robot sent by the humans, now living in a spaceship where they float around on chairs, drink all their food from straws, and are too fat to move, thanks to entrenched indolence. Waste, big business, and sloth?  WALL-E made kids aware of the problems associated with all three.

With Norm of the North here to take on climate change, what might be big screen animation’s next target?  For our part, we’re rooting for Lionsgate or Pixar to take on a thinly-veiled staging of the American political process. It’d be great to see a wild band of squirrels, or maybe a disgruntled hyena, or a futuristic humanely appealing robot, out to take down a Trump facsimile.