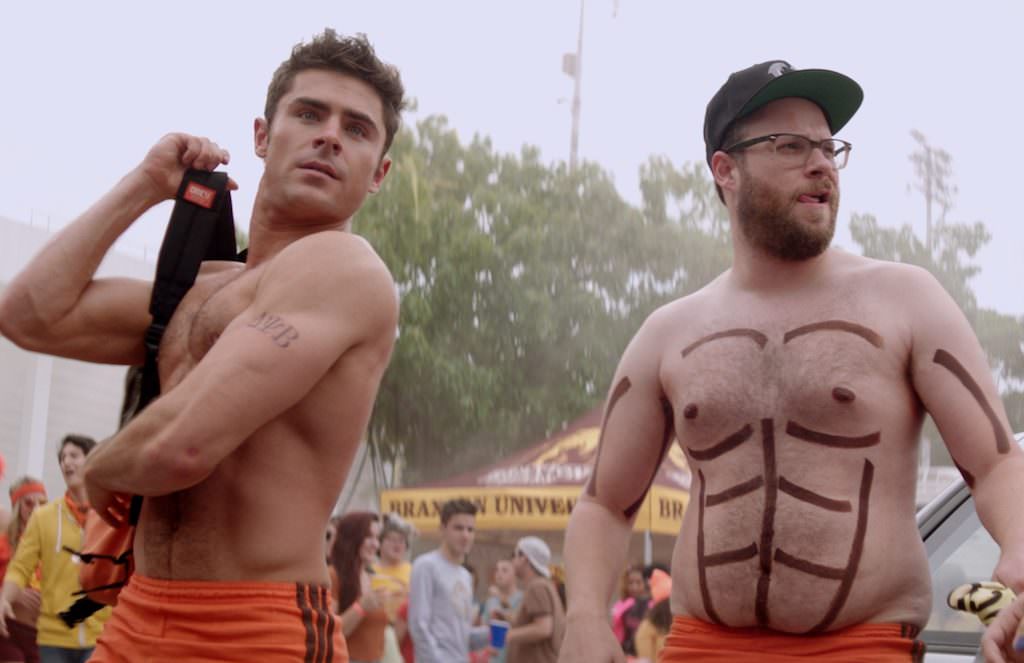 If you saw the first Neighbors, you got a lot of topless dude action, much of it in the jiggly form of Seth Rogen and the anything but Zac Efron. As you can see in the above photo, the dudes and their respective exposed torsos are back for Neighbors 2: Sorority Rising. Before we look at the new film, a refresher on the first; one of the best parts of Neighbors was the comedic chops of costar Rose Byrne, who stole nearly every scene she was in (which shouldn't be terribly surprising given how funny she was, amongst very funny people, in Bridesmaids.) The gist was that Mac (Rogen) and Kelly (Byrne) had recently had a baby. Even more life changing, however, was they also had a frat house move in next door, led by the lunatic Teddy (Efron). After attempting to fit and make nice with their rambunctious neighbors, Mac and Kelly eventually found themselves in a brutal war with the young men of Delta Psi Beta. Pratfalls, hi-jinx, insanely dangerous stunts and the consumption of massive amounts of alcohol later, there was peace.

So for Neighbors 2: Sorority Rising, the ante, and antics, would naturally have to be enlarged. A sequel must, by the laws of cinematic physics, be at least twice as crazy as the original. And what could possibly cause more turmoil in the lives of Mac and Kelly (expecting a second kid) than a fraternity moving next door to their on-campus house? How about the arrival of a sorority, once again moving in right next door, only now out in the suburbs, where young parents are supposed to be safe. Wait, you might be wondering, why the hell is a sorority out in the suburbs? Let the first official trailer explain what brought the gals of Kappa Nu, led by Shelby (Chloë Grace Moretz) into open warfare with the hapless Mac and Kelly, who have some really bad real estate luck working against them once again.