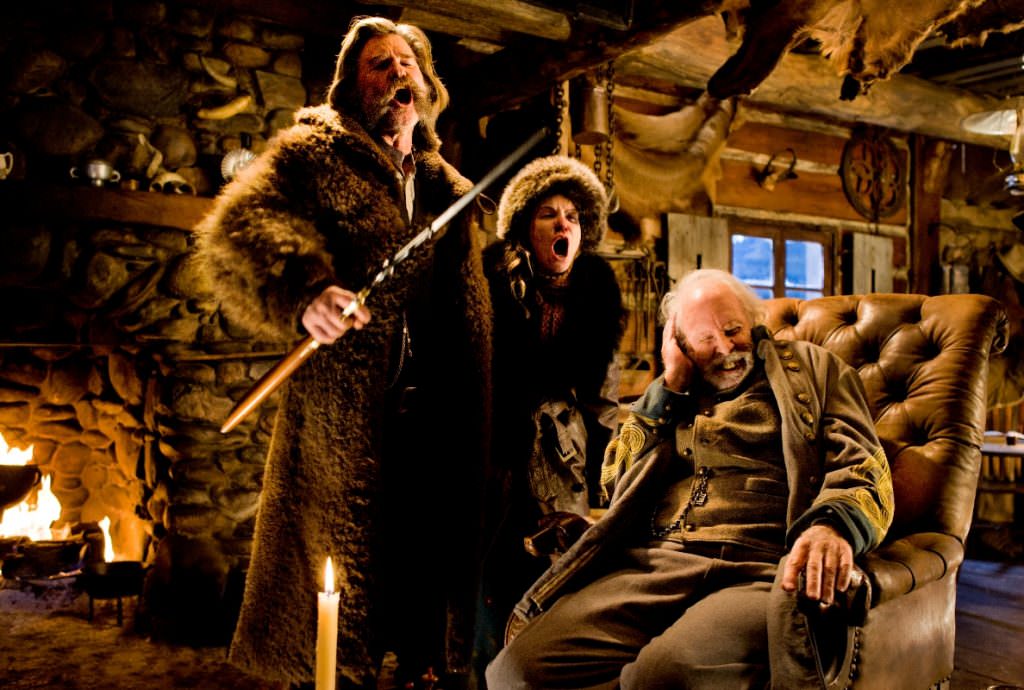 Makeup department head Heba Thorisdottir has been working with Quentin Tarantino since Kill Bill: Vol 1, and hasn't missed one of his movies since. With The Hateful Eight, she might have just put in her most impressive work yet, tending to the grizzled faces of characters living hard lives in the late 19th century, none more so than Jennifer Jason Leigh's sociopathic, bloody-faced Daisy Domergue. We spoke with the Icelandic makeup maestro about what it was like working on Tarantino's claustrophobic, intense western where nobody's clean, morally or facially.

Let's talk about the particular challenges on this set, which was filmed in Colorado in the middle of winter.

Right, it was mostly the weather, the conditions, because a lot of makeup does freeze, so we had to pick something that could withstand the weather. For example on Jennifer, we had to make sure she had both products and/or her makeup on, so when she gets blood on her, it wouldn’t all bead up underneath. Some of the time, it was about making Jennifer feel like a million bucks without a stitch of makeup. 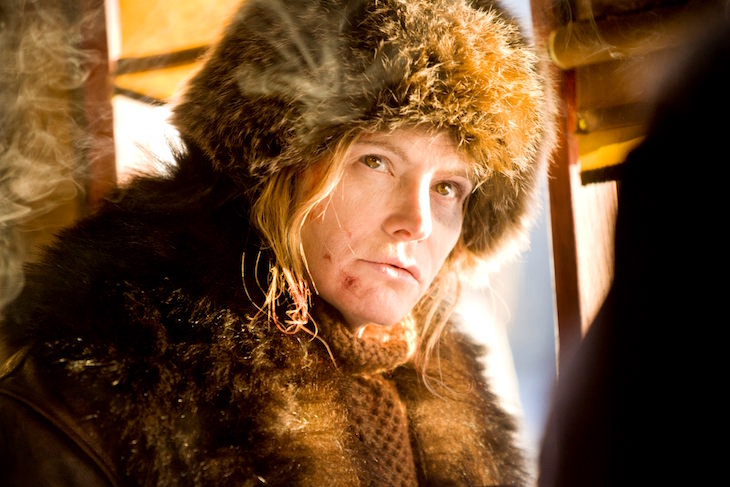 How were you keeping your gear warm and dry?

We were on a mountain top, and to get to basecamp we were using snow cats, snowmobiles, and vans, so we had to be prepared for everything and we had to carry our makeup bags in an insulated cooler. A lot of the time we used these old beer coolers, we just needed something insulated that we could have anything in and be prepared for anything to happen. A lot his films are just out of a kit, and Jake Garber, who was doing effects with us, worked closely with myself and Camille Friend, in the hair department. It's always about teamwork with Quentin’s films, but this one more so than any previous film because I had to train my team that we would be able to jump in at any time and on any actor and know the contuinity—we never knew who’d be stuck in a trailer far away, and who’d be on the mountain top, and everyone had to know everything about each character.

Let's talk about Jennifer's face, which has a black eye to begin the film and only gets worse from there.

I did the beauty part of it, and Jake was our on-set effects artist, so Jennifer would start with me, and I’d do a little minimal beauty routine, then she’d go to Jake’s chair and get the black eye, then the cuts, etc. For Jake and I it was more of a chemistry class in what I could put on her skin so it wouldn’t affect what he’s doing. Even moistureizers will make the blood bead up, so we had to figure out what could withstand the weather the conditions and not freeze on her face and work with the makeup.

What kind of makeup were you using?

I used Natura Bissé, it’s a skin care product that most women are familiar with. I worked with them for her skin care, and there was nothing in it that couldn’t withstand our conditions. So that worked out really well. It was below freezing, it was just as cold as the movie looks.

How was morale on set?

It’s kind of like we’re all just one big family on Quentin's movies, nobody is really above anybody else. Whether you’re Quentin or an actor or a makeup artist, it wasn’t like anyone was spoiled or had their big trailers on the mountaintop, we all just weathered it together, it was freezing, and all the smoke coming out of their breath, that’s all real. That’s the real thing.

What kind of products were you using on the men?

We used products to make them look weathered, we used mainly alcohol paint that could totally withstand the weather conditions. I wanted them to look kind of warm looking, to go with Bob [Richardson]’s lighting and the production design, and we wanted them ruddy and exposed. They all grew out their own beards, so we had to keep those up. It was challenging in that the whole film happens in one day, and none of them really go through any changes really expect Jennifer, so we had to keep everything exactly the same for five months—their beard length, their hair, their eyebrows. Before you ask, yes, Kurt Russell’s facial hair is real. We just kept up the color and put some product in to keep up the style, and we colored it in more for lighting purposes. 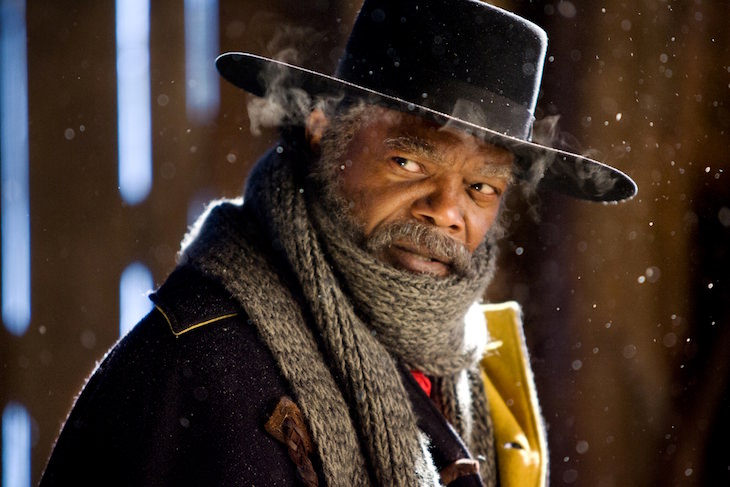 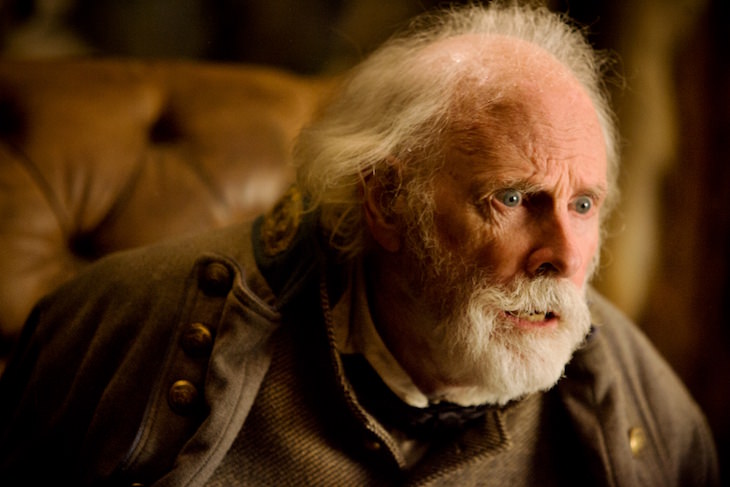 How did Quentin's decision to shoot in 65mm effect your work?

Surprisingly to me, I realized that shooting in digital and 65mm was similar in a way that less is more. I’m not saying that those two formats look anything alike, but for makeup it’s a similar approach. I wanted their skin to look like their skin, I wanted to see their pores, I wanted them to look super real. We did things to make them look exposed and make them look ruddy, we used a lot of dirt to rub it in. They’re in the snow, so they’re nto going to be really dirty, but still they’re not showering every day, so we wanted them to look more textured of dirt, then actually looking dirty. We didn’t want them to look even. 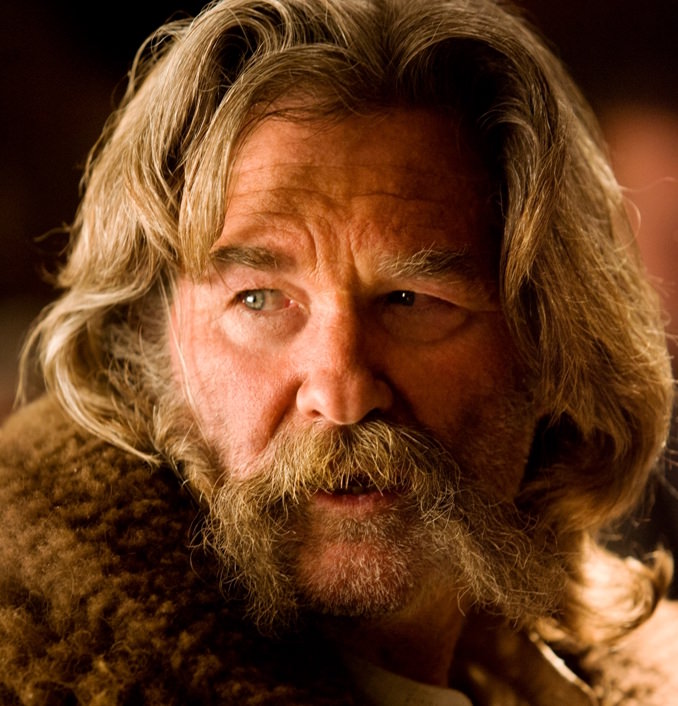 How do you make them look exposed and ruddy?

We used the skin illustrator, alcohol paint, and we used sponges and brushes and mixed up the color every day. Over the five months, some of the actors had maybe four days off, and were walking around Telluride, where the sun can be really strong, so they got red and then you’d have to use less that day, or color that up. So we didn’t have anything specifically made, we just used the alcohol paint and stippled it on.  We used some highlighters around their eyes and their cheekbones, just to make it stand out a little bit. I grew up watching westerns, and I remembered when I was a little kid, Clint Eastwood’s tanned, weathered skin, and the white wrinkles around his eyes where’d he been burned.

Did Jennifer enjoy this whole process?

I don’t know if she enjoyed it, but she certainly was a trooper and never complained, and none of us thankfully know what it is to sit there in the freezing cold, in a costume that weighs fifty or seventy pounds, and then be covered in blood that’s sticky and gooey, then you have to sit in the car for half an hour to go down to the trailer to wash it off. But she was amazing with it, I’ve always been a big fan of hers and I was stoked that she was in this film. She immerses herself in it, she was just incredible. It was only on first day when she mentioned a mascara that she said would stay on the best, and I’m like, "You’re not having any mascara, honey."