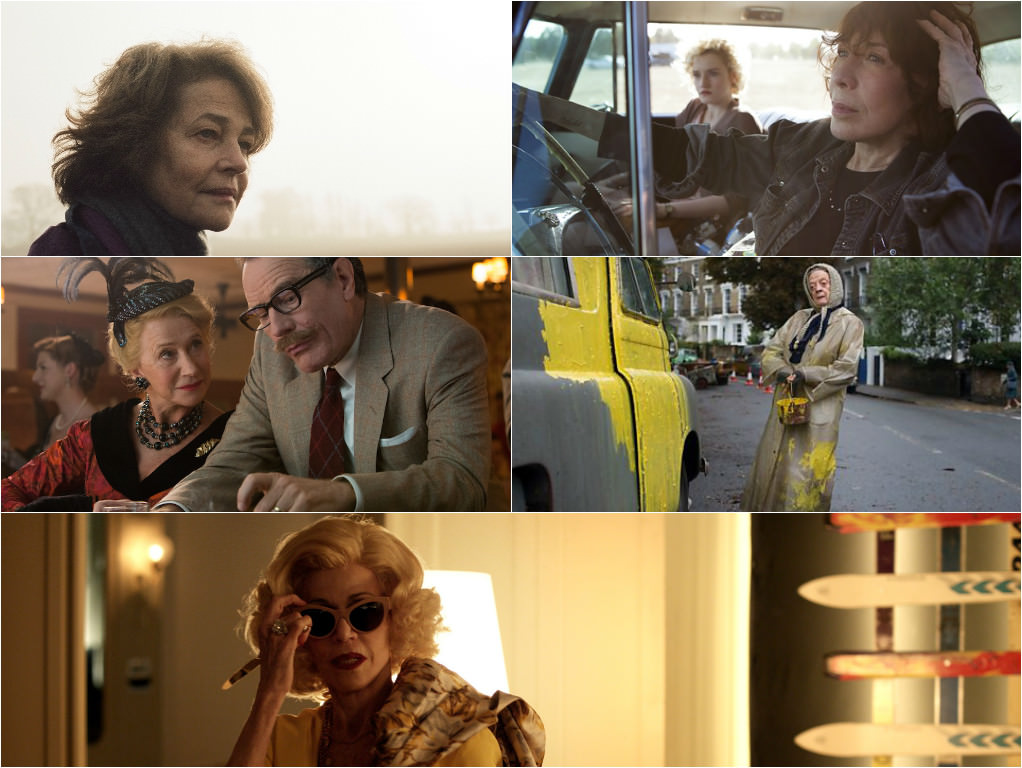 When the Oscar nominations are announced tomorrow, January 14, expect several of Hollywood’s best and brightest young actresses to lead the pack. Brie Larson, 26, and Saoirse Ronan, 21, should be shoo-ins as best actress nominees for their stellar work in Room and Brooklyn, respectively. Jennifer Lawrence, 25, already an Oscar winner, could easily land another nomination for Joy. And even though her film, Clouds of Sils Maria, was out very early in the year, Kristen Stewart, 25, has already won supporting actress honors from key critics’ groups for her revelatory work opposite the formidable Juliette Binoche.

But what’s so surprising this year is how many older actresses are also on the Oscar shortlist. And not just older — like Jennifer Jason Leigh, 53, or Joan Allen, 59, both vying for a supporting actress nod — but women well past a certain age. Six veteran actresses, whose ages range from 70 to 81 years young, have solid shots at Oscar gold, a rare thing in a business justly criticized for too often relegating mature women to minor roles while their male counterparts (Al Pacino, 75, Harrison Ford, 73, Woody Allen, 80, and on and on) continue to get romantic, action and adventure leads well into their 70s and even 80s.

The sexy and vibrant Charlotte Rampling (she turns 70 on Feb. 5) has already won year-end best actress honors from both the Boston Society of Film Critics (of which I am a member) and the Los Angeles Film Critics for her indelible turn in 45 Years as a woman whose longtime marriage is put to the test by a revelation from the past. The British actress and her costar Tom Courtenay first drew recognition for their knockout performances when they took best actress and best actor Silver Bears at Berlin earlier this year. Rampling has delivered one great performance after another since breaking onto the movie scene in the 1960’s with The Knack and Georgy Girl. I think she was robbed of a nomination for her brilliant work in Sidney Lumet’s still-searing The Verdict, as well as for her superb performances in two haunting films by French director Francois Ozon: Under the Sand (2000) and Swimming Pool (2003). It’s unfathomable that Rampling has never been nominated for an Oscar. That has to change this year.

Maggie Smith, 81, has already won two well-deserved Oscars and could land a nomination this time around for her compelling, dominating performance in The Lady in the Van, Nicholas Hytner’s darkly funny film from Alan Bennett’s autobiographical stage play (Smith starred in the 1999 West End production and was nominated for an Olivier Award). It tells the true story of Mary Shepherd, an elderly woman who lived in a dilapidated van in Bennett's driveway in London for 15 years. Smith’s chances at a best actress nomination may be hurt by the film’s limited January release but she got a boost with a Golden Globe nomination. Plus, Smith’s scene-stealing Violet Crawley, the Dowager Countess of Grantham, is still the best thing about Downton Abbey, which is enjoying its final season and reaping a bonanza of tributes and tears.

Lily Tomlin, 76, also was the best thing about Grandma, Paul Weitz’s micro-budgeted film about an abrasive lesbian poet (Tomlin) who drives her granddaughter (Julia Garner) around Los Angeles in search of the money she needs to terminate her unwanted pregnancy. After it wowed audiences at Sundance, there was speculation that Tomlin might snag an Oscar nod for her first leading role in 27 years, and one that allowed her to tap into hard-won, career-spanning understanding about loss and fears of aging and irrelevance. She did get a Golden Globe nomination for Grandma; make that two, since the suddenly hot Tomlin also landed a nomination for her role in the Netflix comedy Grace and Frankie. But the slight Grandma may have slipped off voters’ radar in the year-end glut of great performances in higher profile films.

Tomlin’s Grace and Frankie costar, Jane Fonda, didn’t get a Globes nod for their Netflix hit, but she did come up with a best supporting actresses nomination for her brief but electrifying scene in Youth, Italian director Paolo Sorrentino’s English-language follow-up to his Oscar winner The Great Beauty. At 78, the two-time Oscar winner continues to be a force. Sorrentino’s aria to aging focuses on three lions in winter: Michael Caine as a retired orchestra conductor; Harvey Keitel as a veteran film director; and Fonda as international film star Brenda Morel who refuses to concede to age or irrelevance.

Some voters may have forgotten how luminous Blythe Danner, 72, was in a rare leading role in I’ll See You in My Dreams, since Brett Haley’s small but lovely film opened last spring. Danner played a widow ready to embrace the unknown when she meets a a likable man (Sam Elliott, perfect). Danner’s portrait of a still sexy, still youthful woman anchored this unsentimental film that poignantly revealed the risks and rewards of love no matter how old we are. Although she’s won a Tony, Danner has never been nominated for an Oscar. It would be an upset, but justly deserved.

The true dark horse in this year’s Oscar race is Helen Mirren, 70. A past winner for The Queen, Mirren is a double threat this year. Her moving turn in Simon Curtis’s Woman in Gold, the true story of a Jewish woman who fled the Nazis for America and who, many years later with the help of a young lawyer, fights to win back the famous Gustave Klimt painting of her beloved Aunt Adele that hung in the family home in Vienna, might get overlooked because it was released early in 2015. But I expect Mirren will be rewarded in the supporting actress category for Trumbo and her gleeful performance as powerful Hollywood gossip monger Hedda Hopper, who helped fan the flames of the anti-Communist witch-hunt of the 1950s.

It is ironic that this year’s Oscars will put women over 60 in a range of juicy roles into the spotlight, since the year began with Hollywood being taken to task for gender pay inequality at its premiere event. Boyhood supporting actress winner Patricia Arquette brought Meryl Streep to her feet and catapulted gender equality and the wage gap to the forefront of the cultural debate with her acceptance speech. Then there was the Sony Hack brouhaha, which revealed that both Jennifer Lawrence and Amy Adams made significantly less than their male American Hustle costars Jeremy Renner, Christian Bale and Bradley Cooper. Add to that the ongoing controversy over the dearth of women film executives and blockbuster movie directors, highlighted by Maureen Dowd’s New York Times Magazine cover story The Women of Hollywood Speak Out in November, 2015.

But is this attention an anomaly or a trend? The fact that no women of color graced THR cover isn’t just because there are no frontrunners for awards this year. Most of the big names — Viola Davis, Taraji P. Henson, Kerry Washington — are finding meatier roles in television. There were terrific performances by women of color in small indie films such as transgender actors Kitana Kiki Rodriguez and Mya Taylor as street hustlers in the low budget comedy/drama Tangerine; Teyonah Parris in Chi-Raq; and Tessa Thompson in Creed. But so far these haven’t generated much Oscar buzz.

As for women directors, sure, there’s a huge discrepancy in opportunities granted to women versus men of similar experience and track records, as Dowd’s story so aptly points out. But 2015 saw the emergence of directors Sarah Gavron (Suffragette); Marielle Heller (The Diary of a Teenage Girl); the stunning Turkish film Mustang, directed and co-written by Deniz Gamze Erguven; Céline Sciamma’s Girlhood and Melanie Laurent’s Breathe.

All in all, not a bad year. Let’s hope it’s a harbinger of better days ahead.