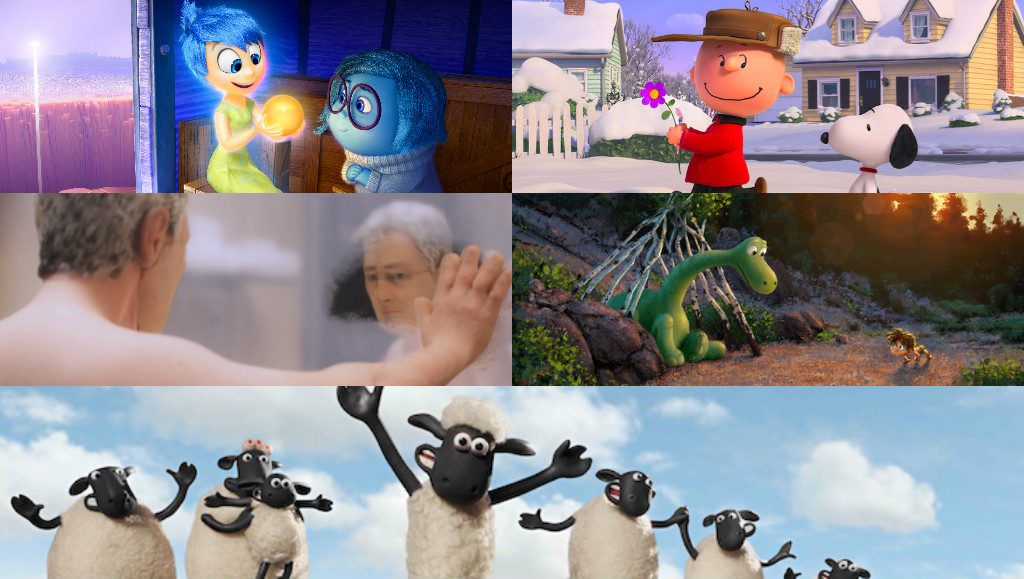 Get to Know Your Golden Globes Nominees for Best Motion Picture, Animated

Yesterday we delighted and thrilled you with two Golden Globe primers to make you the toast/scourge of your friends and/or family. Our primer for the Best Motion Picture, Drama and Best Motion Picture, Musical or Comedy categories were designed to give you the tools (in the form of interviews we've done with the below-the-line artists who helped make those films great) to sound like a cinematic savant. "Harold, did you know Carol took 11 years to get made?" "Excuse me, Maude, were you aware that the Gigahorse in Mad Max: Fury Road was actually two Cadillac bodies, fused together, and powered by a pair of Chevy 502 engines?" This is you at your Golden Globes party! Your friends will love and/or loathe you!

We're back at it now with our primer for the Best Motion Picture, Animated category. While the Globes is as much of a party as a show, and half the fun is seeing who's sitting with who, who's a little (or a lot) drunk, and who Ricky Gervais has just infuriated, it's nice to remember that super talented people, like those behind these animated films, really deserve our attention.

So sit back, relax, and use some of the below information to wow/bore your friends when the animated award comes up.

The gist: For film fans of a certain type (read; me), anything Charlie Kaufman does is worth watching. Anomalisa centers on a lonely, unmotivated man named Michael Stone (voiced by David Thewlis) on a business trip. His job? He's a motivational speaker, famous to a very small segment of the population who love his bestselling book about customer service, "How May I Help You Help Them?" At his hotel, he meets Lisa (voiced by Jennifer Jason Leigh, having a big year), the first person to ignite a spark of life inside Michael. Written by Kaufman and co-directed by Kaufman and Duke Johnson, the film's weird, compelling, and ultimately moving. Tom Noonan voices all the other characters.

Sound smart: So how'd Kaufman and Johnson pull this stop-motion heartbreaker off? The story behind the making of the film is almost as interesting as the film itself, so let us introduce you to Starburn Industries, the mechanics behind the magic of one of the most sensational animated films you'll see, this year or any other.

The gist: Perhaps one of the boldest concepts in Pixar's history. The film follows a happy 11-year-old Midwestern girl named Riley (Kaitlyn Dias) who swiftly becomes morose and depressed when she and her parents move to San Francisco. The brilliant conceit is the film takes place largely inside Riley's mind, specifically with her key emotions, once dominated by Joy (Amy Poehler), with Anger (Lewis Black), Fear (Bill Hader) and Disgust (Mindy Kaling) in the mix. But now it's Sadness (Phyllis Smith) who seems to be the key to Riley's existence. It's up to her emotions to help Riley through this tumultuous life experience.

Sound smart: Find out from our interview with one of Inside Out's screenwriters, Meg LeFauve, how they managed to create such an emotionally complex, and honest, portrayal of an adolescent girl's interior world. Next, go down the rabbit hotel with us as we detail what inspired Pete Docter and his fellow filmmakers to tackle such a unique, and hard-to-film subject.

The gist: The premise is clever; dinosaurs never became extinct, and live side-by-side with prehistoric humans. The Good Dinosaur himself is an amiable young Apatosaurus named Arlo (voiced by Raymond Ochoa), who befriends a human child (voiced by Jack Bright) after he's separated from his dinosaur family. Thus begins an adorable, and beautifully wrought, road movie as the two new friends try to find Arlo's parents.

Sound smart: The film is inarguably gorgeous, but how were the visuals made so fluid? Pixar animator Kevin O'Hara gave us the scoop on how those wizards turn bits and bytes (and also, lovingly hand drawn artwork) into the incredible images we see on the screen.

The gist: They're all back, and for the first time ever, they've been animated in 3D. Join Charlie Brown, Snoopy, Lucy, Linus and the rest of the beloved "Peanuts" gang on a new, epic quest.

Sound smart: Honestly, the amount of painstaking effort the animators put into honoring Charles M. Schulz's beloved newspaper strip cartoon is humbling. And, when you get to the bottom of their effort, fascinating. Did you know that Schulz's iconic, unique style was actually more Picasso than it was proper cartoon drawing? Let animation supervisor Steve Martino explain, and learn more about the Herculean effort that went into creating something that Schulz himself might have loved.

The gist: Shaun's a mischievous sheep who has a bunch of wacky adventures around a small farm, but his fun loving lifestyle eventually gets the farmer taken from the farm. So Shaun and his pals need to go to the big city to rescue him. The film's British, stop-motion, and a spin off from the Wallace & Gromit franchise.

Sound smart: While you may never have heard of this movie, there's a reason it's nominated—it's dialogue free, and feels more like a silent slapstick than a modern animated film, in a good way. The film's been positively reviewed by a slew of major critics, many of whom touch upon it's inherent humanity and visual wit. Vulture's Bilge Ebiri writes that "beneath it's pitch-perfect simplicity lies great wisdom and beauty."