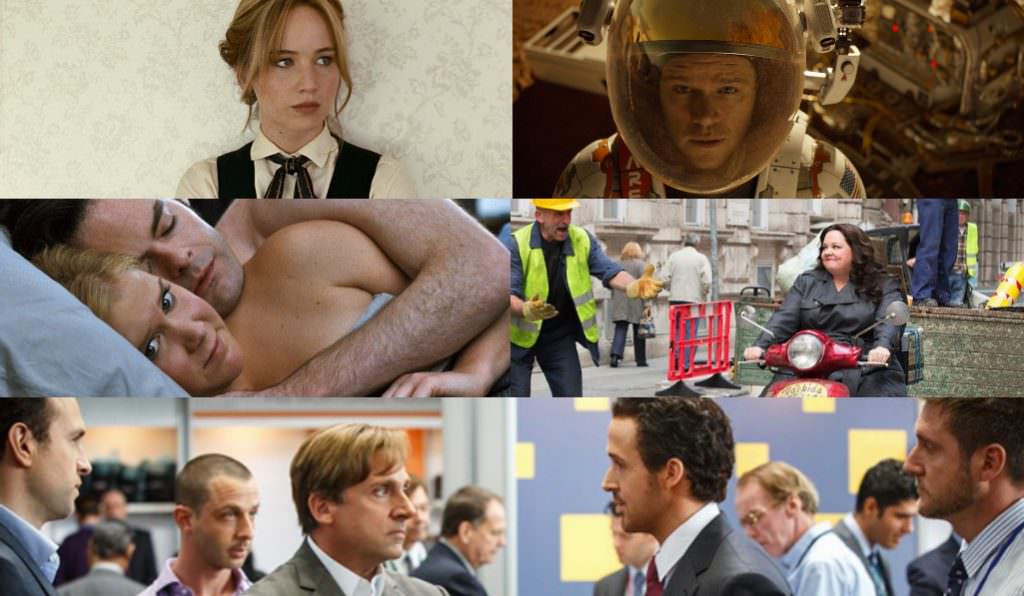 Get to Know Your Golden Globe Nominees for Best Motion Picture, Musical or Comedy

Earlier we published a primer for the Golden Globe nominees for Best Motion Picture, Drama. The idea here is while you probably haven't had the time to see all these films, we have, and we've also interviewed a ton of people from them, thus offering you a chance to give these interviews a glance and bolster your film IQ going into the big night. You can do with this info what you want—we suggest you use it to casually mention minute details of the filmmaking process to whoever you might be watching with. It's always fun to sound knowledgeable and condescending over tapas.

The gist: Director Adam McKay tackles Michael Lewis's book about the financial crisis of 2008 in this hilarious, and depressing, whiz-bang account. The story focuses a few people in the financial industry who saw the crash coming, and includes an A-list ensemble cast (Ryan Gosling, Christian Bale, Brad Pitt, Steve Carell, etc.) and cameos by more famous people explaining all the tricky financial mumbo jumbo. If you still don't know what a credit default swap is, let Margot Robbie in a bubble bath explain. And for a synthetic credit default swap, well, Selena Gomez is here to explain it. The movie is a brisk, brilliant, brutal tour of the dark heart of capitalism. The funniest part? It seems we've learned nothing from that global financial catastrophe! Ha ha?

Sound smart: Learn how The Big Short was far from an outlier for a director best known for comedies like Anchorman, and how McKay has been seeding tales of corruption, greed and incompetence into his films before he finally tackled Lewis's book.

The gist: Jennifer Lawrence re-teams with director David O. Russell and co-star Bradley Cooper for this generational saga centered on Lawrence's titular heroine, who founds a business dynasty almost despite her lunatic family.

Sound smart: Do you know how hard Joy was to design? You probably don't. We didn't, until we spoke to production designer Judy Becker (we also interviewed her about Carol, because she just crushed it last year) to find out how she re-created several generations (and their varying styles) in a single film.

The gist: Someone left Matt Damon on Mars! Or, a touch more accurately, director Ridley Scott took on this adaptation of Andy Weir's bestselling book about an astronaut named Mark Watney (Damon) who is marooned on Mars after a mission on the planet goes horribly wrong, and made it into one of the year's most thoroughly entertaining films.

Sound smart: Where to begin with The Martian, considering how much we've covered it…let's start with screenwriter Drew Goodard, who adapted Weir's novel. Next, find out what VFX supervisor Richard Stammers meant when he told us they didn't have to create a "vomit comet" during production. Now, let's move along to production designer Arthur Max, who did such a brilliant job re-creating the Martian landscape. Oh my god there's more? Yes, there's more, like this piece on how NASA helped the filmmakers get their science right.

The gist: Melissa McCarthy stars in this comedy caper from director Paul Feig, playing CIA analyst Susan Cooper who goes from being a desk jockey to a full blown field agent, sent off to contend with Bulgarian arms dealer Rayna Boyanov (Rose Byrne).

Sound smart: How'd McCarthy, and the rest of the cast (save for Jason Statham, who can actually do these stunts) end up looking like such realistic butt-kickers? Let our interview with stunt coordinator J.J. Perry explain.

The gist: Amy (Amy Schumer) is a binge drinking commitment-phobe living in New York City and working at the god awful (yet utterly believable) magazine S'Nuff, when she's forced to reevaluate her feelings about intimate relationships (and drinking wine from the bottle) when the doctor she's profiling (Bill Hader) becomes a love interest. Written by Schumer and directed by Judd Apatow and co-starring Lebron James! And he's good in it!

Sound smart: When you're editing a comedy, especially one with Amy Schumer, there's going to be a lot of laughs that are left on the cutting room floor. We spoke with the film's editor, William Kerr, about this very thing, and how he prefers the messy take to the perfect one.