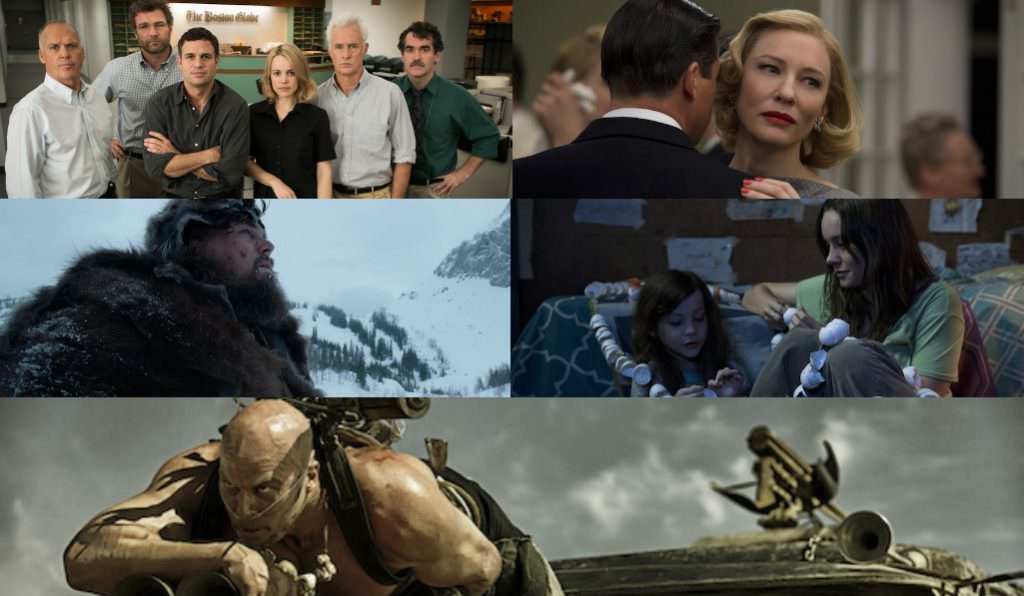 Get to Know Your Golden Globe Nominees for Best Motion Picture, Drama

With the Golden Globes airing this Sunday night, we figured we'd put together a little hyperlinked primer for you. Unless your job it is to know how these films are actually made, chances are you've seen some, missed others, and know who the bold faced names are. With that in mind, and to shed a little light on the folks behind the stars you'll be watching during the broadcast, we've rounded up the interviews we've done over the past year with the below-the-liners who helped make these movies. You can sound both knowledgeable and slightly obnoxious at your Globes party with some of these prefabricated bon mots. Thank us later!

The gist: In this adaptation of Patricia Highsmith’s seminal novel "The Price of Salt," director Todd Haynes put his period-perfect touch on the tale of two women (Cate Blanchett as Carol, Rooney Mara as Therese) who find themselves having a very unexpected love affair in 1950s New York.

Sound smart: Think the above sounds like a film that was easy to get made? Right, that's why our interview with the films' tireless producers, Elizabeth Karlsen and Christine Vachon will offer you a deep dive on just what has to happen to get a slow burn, small market beauty like Carol on the screen. Speaking of beauty, let the costume designer, Sandy Powell, and the production designer, Judy Becker, wow you with how they helped give the film it's gorgeous visual luster. Oh, and in a few days, we'll also be publishing our interview with Carol screenwriter Phyllis Nagy, on the unusual (and heartening) process she used to adapt Highsmith's most personal novel (hint; take copious notes, then throw hide them).

The gist: Director George Miller returns to the story of Mad Max, and in the process created the year's most surprising, satisfying spectacle. In this parched post-apocalypse, the psychotic, truly gruesome Immortan Joe (Hugh Keays-Byrne) enslaves survivors inside his desert fortress by rationing water and murdering dissidents. This leads to the year's best heroine, Imperator Furiosa (Charlize Theron) going on a daring escape with Max Rockatansky (Tom Hardy), a loner and former captive, to change the power structure for good.

Sound smart: If you've seen the film, you've marveled at those insane cars and trucks. So, read our interview with art director Jacinta Leong and find out how they were built.

The gist: Director Alejandro González Iñárritu and cinematographer Emmanuel Lubezki, fresh from their Birdman romp, are back at their wildly ambitious ways with this epic tale of frontier revenge. A fur trapping expedition of the uncharted American wilderness comes across some pissed off Arikara warriors and one furious mama grizzly, which nearly kills Hugh Glass (Leonardo DiCaprio). Glass is left for dead by John Fitzgerald (Tom Hardy), but it's Leo, so he can't die in the beginning of the film, but he can go an epic hunt of his own…for John Fitzgerald's pelt!

Sound smart: Read our interviews with legendary production designer Jack Fisk on how he and his team helped tame, or at least capture, the great outdoors, and, how he channeled 19th century fur trappers by using materials they would have had access to. Also, find out how costume designer Jacqueline West created those incredible, practicle clothes (the pelts, by the way, were all handmade, nothing was from a real animal) for a film shot entirely outdoors and in brutal conditions. And finally, learn some bear safety tips, which could have helped Leo—never, ever wander between a mama bear and her cubs, brother!

The gist: Based on Emma Donoghue's novel, and scripted by Donoghue herself, Room focuses on Ma (Brie Larson) and her 5-year old son Jack (Jacob Tremblay), who have been held captive for years in a single room, and what happens when they finally gain their freedom.

Sound smart: Why not hear from Donoghue herself about what it was like to adapt her own work for the screen. You can also read our interview with casting director Fiona Weir, about finding Brie and Jacob for the roles of Ma and Pa, and how chemistry trumped all. Hold on, we're not done—we also spoke to cinematographer Danny Cohen about making a small room big, cinematically speaking.

The gist: A brilliant look at a sickening case—director Tom McCarthy worked wonders in this ensemble film about the Boston Globe 'Spotlight' investigative reporters who uncovered a massive coverup of sexual abuse in the Catholic archdiocese of Boston in the early aughts. The cast, including Michael Keaton, Rachel McAdams, Mark Ruffalo, Liev Schreiber and John Slattery are superb.

Sound smart: How do you make journalists doing their job (making phone calls, looking up files, making more phone calls) look so thrilling? We spoke with editor Tom McArdle about the ways to cut a scene to make it pop, even when it's three guys looking through a directory.

Check back in for our cheat sheet for Best Motion Picture, Comedy or Musical, in a hot minute.