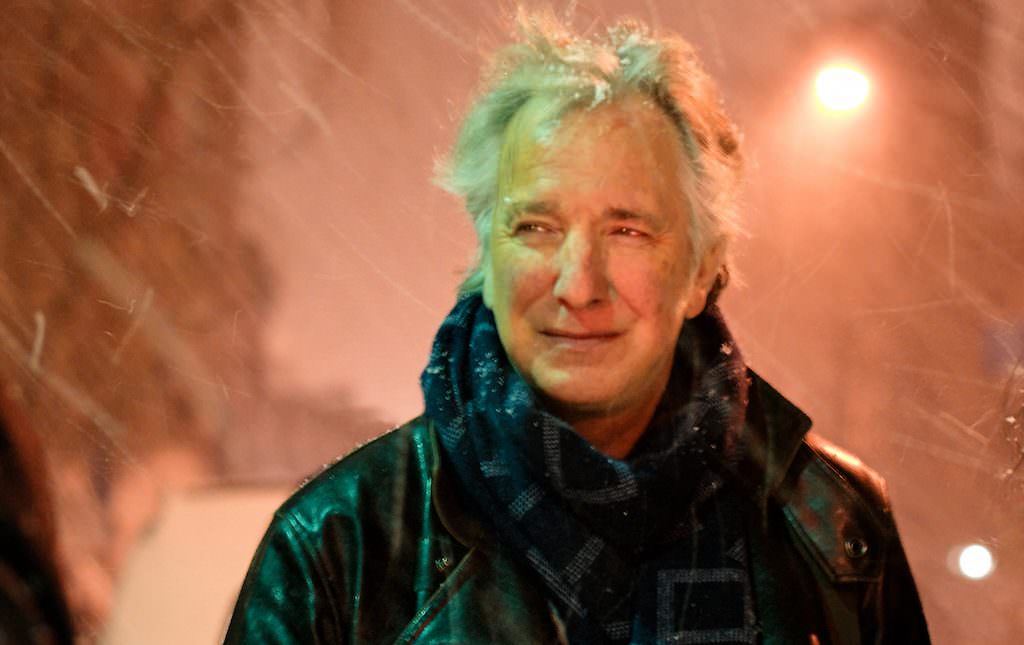 Alan Rickman, who passed away yesterday in London at the age of 69, was an accomplished British stage actor who stood out in any film or production he was a part of. Rickman's presence could make a decent film good and a good film great. His career spanned more than 40 years, and that longevity allowed him to embody characters along the entire spectrum of humanity, from the sweet and humble to the treacherous, inscrutable and sociopathic. And, he had one of the best voices of any actor working. Maybe one of the best ever, period.

On the softer, or just saner, side of the scale, Rickman could play the gentleman or the cad with the very best of them. Look at the courteous, noble Colonel Brandon in Sense and Sensibility (1995), such a composed gentleman burning with quiet, but scorching, hots for the beautiful Marianne (a young Kate Winslet). He was, in my humble opinion, the most lifelike character in Richard Curtis's perennial Christmas favorite Love Actually (2003), playing Harry, a man falling for his secretary (Heike Makatsch) despite his long, prosperous marriage to Karen (Emma Thompson). Rickman even credibly embodied the devoted ghost boyfriend Jamie in Anthony Minghella's Truly Madly Deeply. While Rickman's voice, as always, such a superb instrument, I'm willing to give this mustache its' due.

Rickman fans will often point to his comedic chops in the underrated Galaxy Quest, a 1999 sci-fi comedy in which he plays Alexander Dane, a pompous British thespian saddled with the insufferable indignity of having only one role he's ever recognized for; as an alien crew member on a Star Trek-like TV series. Not to keep dwelling on his voice, but seriously, has there been anyone in the business better at seething than Alan Rickman? Who would you rather watch seethe? Name one person.

And of course, for the younger generation, Rickman became arguably the most compelling character in the Harry Potter franchise. As Severus Snape, he lent the films a much-needed dose of sarcasm and menace. You could never be sure (if you hadn't read the books, that is) whether Snape was good or bad, but he was, irrefutably, the most interesting instructor at the Hogwarts school.

For people of my generation (raised on the films of the 1980s), however, Rickman will be foremost remembered for playing the most thrilling villain of the era, Die Hard's cosmopolitan psychopath Hans Gruber. I can vividly remember the first time I saw the film. I was ten, at a sleepover at my friend Tom's house, and there were about six of us watching Die Hard for the first time. Naturally, we were in awe of this film. There hadn't been anything quite like it before, and Bruce Willis's John McClain was, to a ten-year-old (hell, to a 37-year-old) the template for what a man was. He was a divorced New York City cop. He was tough, and a wiseass, and handsome, and he smoked, and he drank—he became, pretty much instantaneously, my generation's John Wayne. Sly Stallone was too beefed up in Rambo to rate as a remotely achievable ideal, and Arnold? Please. No pencil-thin or chubby American kid could relate to an Austrian body builder who looked less like a man and more like an huge appliance that had mysteriously been given the breath of life. But Bruce Willis, as McClane, looked like a regular guy, and he sounded like a regular guy, a guy that any one of us, with a perfectly receding hairline and a few rounds at the gym, could conceivably become.

And then Rickman shows up. I just remember thinking, holy sh*t, who is this guy? A preening, brilliant German terrorist mastermind with that voice. That voice that was so filled with contempt for the terrified Christmas party-goers now under his control in Nakatomi Tower. He was nothing like the stoic, street smart John McClain. Gruber was twitchy, lean, talkative, nasty, pompous, and probably a sociopath. And yet, and yet, he was totally irresistible. You couldn't take your eyes off him. Every word out of his mouth was like a dagger cloaked in a beautiful cloth. I didn't want to be Gruber, but I sure as hell didn't want to go against him, and, I sort of secretly wanted to hang out with him, maybe in Berlin, at a club, when he was in a more pacific mood.

And while McClane would probably proudly have claimed to not have read a book since high school, you felt like Gruber had read everything, and could just start spouting whole paragraphs from Thomas Mann's "The Magic Mountain" or any number of Shakespeare soliloquies while simultaneously waving a gun in someone's face. And when he first finds out about McClane's rogue presence in the building, he immediately mocks him. “Who are you?” he asks during one of their excellent walkie-talkie exchanges, “Just another American who saw too many movies as a child? Another orphan of a bankrupt culture who thinks he’s John Wayne?” Yes, that's exactly who John McClane was, and Gruber knew it. He scoffed at this idiot American, and, at the beginning at least, even seemed to almost pity him, a nobody cop making meager bucks while he, Hans friggin' Gruber, was a multilingual aristocrat criminal shooting for the moon with the big Nakatomi heist. While lesser men, like McClane, followed the rules and eeked out their existence, Hans Gruber was a villain who appreciated the finer things in life, and he aimed to achieve them no matter the body count. Referring to the recently arrived FBI, who were now involved in foiling his plans, or at least spiriting the hostages to safety, Gruber offered this immortal line: "When they touch down, we'll blow the roof, they'll spend a month sifting through rubble, and by the time they figure out what went wrong, we'll be sitting on a beach, earning twenty percent." He literally walks off screen after this quip, a thespian version of the mic drop. This was a new type of villain, one who could appreciate compound interest.

Simply put, Hans Gruber was my villain, a man made terrifying not because he was seemingly invincible, but because he was anything but. He was so petulant, so on edge, so real. Gruber wanted to rob Nakatomi Tower so bad. You could feel the greed and desire just oozing off him, and coloring every glorious, clipped word. Rickman didn't just nail the role of Gruber, he changed what a villain could be for an entire generation of young movie lovers. Sure, only a year before I was scared as hell of the Predator, and a year before that I'd even been spooked by the bumbling Fratelli family in Goonies (Anne Ramsey's Mama Fratelli was, to a seven-year-old, a colossal terror—why are you forcing them to drink that brown water, you ghoul!?), but once Rickman waltzed into Nakatomi Tower in Los Angeles, wearing a sharp suit and a perfectly trimmed beard, he became the ultimate bad guy. Just watch how calmly, and hilariously, he reveals the fate of one of the executives in Holly Gennaro's (Bonnie Bedelia) company, delivered with his casual erudition and menace, all while snacking, no less.

There was a moment when Rickman's performance felt so real to the ten-year-old me that I actually had to run out of the room, forcing Tom's mom to console me in the kitchen by reminding me it was just a movie. It's when Harry Ellis (played so perfectly by Hart Bochner), a sleazeball Nakatomi executive, thinks he can end all the trouble McClane's been causing for Gruber and his gang by talking the New York City cop into giving up. The scene, played out in one of the tower's conference rooms, begins almost as farce—there's Ellis, like Gruber, neatly bearded and handsome, thinking that he's Gruber's equal. Clearly an insane assumption, but one Gruber allows Ellis to believe, playing with him until Ellis proves himself useless. Then Gruber executes him. For me, it was the film's most brutal moment, another evolution in Gruber and McClane's Most Dangerous Game, in which each man is hunting the other, and will do anything to achieve their desired outcome. It wasn't just the fact of Ellis's murder that shocked me, in such close quarters and in such gory detail (I'll never forget the blood, and likely brains, on the window), but it was the way Gruber carried it out. With conviction. With coldness. And grotesquely, with elan.

I'd never seen a villain like that before. I didn't know villains could even be like that. Rickman will be missed for the person he was and the many, many incredible performances he gave. Watching Hans Gruber get his comeuppance at the end was satisfying for the 10-year-old me, as American values were reasserted and the slick, sinister German was dispatched. But somewhere, deep inside, I was a little bit sad. I knew the greatest villain I'd ever seen was gone.