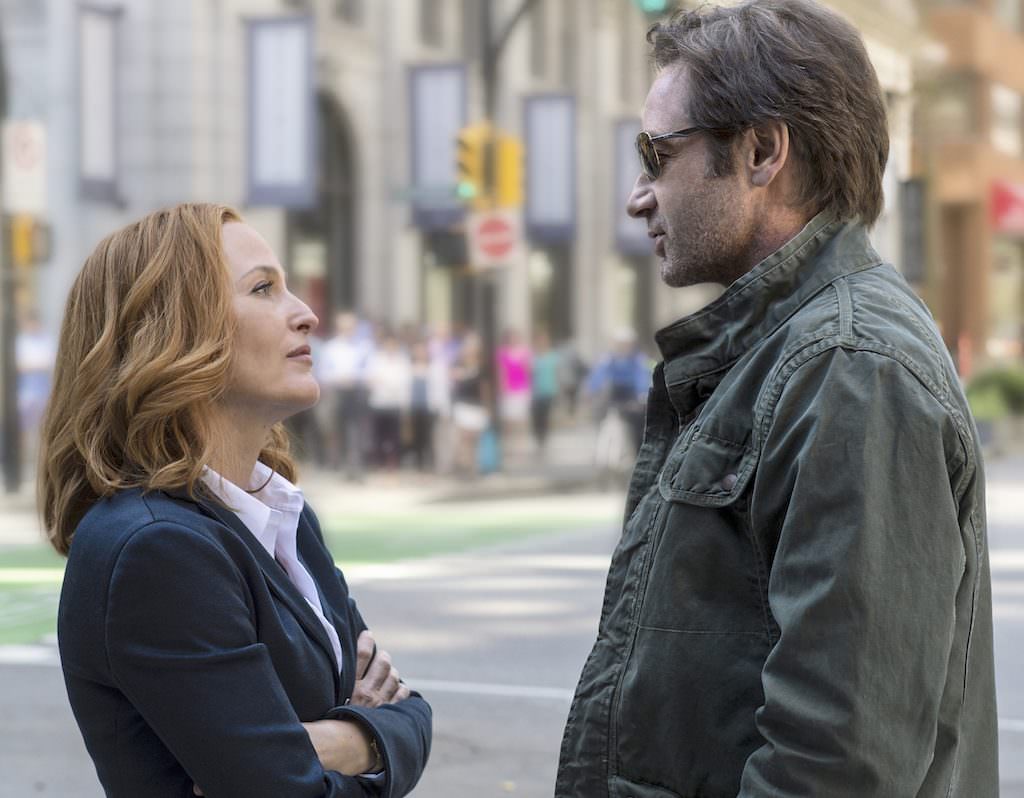 Thanks to its hefty publicity campaign, you’re probably aware that Fox has announced an official revival of the beloved science fiction show X-Files. And while reboots might strike fear in the hearts of many, this ground-breaking, well-reviewed and highly-rated show seems fitting, considering it changed the landscape of television before the cable explosion and putting the network on the map. It premieres this Sunday, January 24, at 10ET/7PT.

Most importantly, X-Files made a space for both Gillian Anderson and David Duchovny, two actors who were relatively unknown at the time of filming, and writers like Chris Carter, Frank Spotnitz and Vince Gilligan, all while breaking science fiction into the mainstream.

And while the impending reboot is surprisingly brief (it only spans six episodes), the original series ran nearly 200 episodes long and consisted of two feature length films.

An intimidating number to say the least, but whether you need a casual refresher or a rigorous primer, The Credits has got you covered with an easy list that should establish an understanding of the show in ten episodes or less. 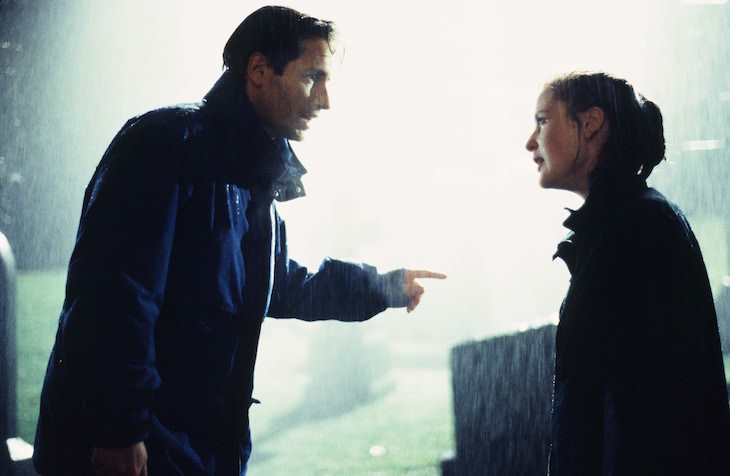 The first episode of the series makes it onto nearly any list of best episodes, and rightly so. Despite the fact that the first season of the show was as bumpy as any other (besides the unspeakable ninth season), the pilot offered a perfectly wrought and solidly conceptualized introduction, working both as a monster-of-the-week and a mythology episode. Besides introducing the early ‘90s, soft-faced and charmingly dressed Duchovny and Anderson, the pilot was written by X-Files all-star Chris Carter, and introduced the timeless skeptic/believer dichotomy that propelled the show even into its late seasons. Opening doors to countless disapproving looks from Scully, questions about Mulder’s curious connection to the extra-terrestrial, and the curious Cigarette Smoking Man; if you watch no other episode to prepare for the miniseries, let it be this one.

Though much of the first season is relatively skippable, the first hint that the show might have some legs surfaced in the eighth episode. Essentially a retread of John Carpenter’s science fiction masterpiece The Thing, Ice locks up Mulder and Scully in a familiarly isolated snow-covered locale only to subject them to strange and malevolent alien creatures. Featuring an early appearance from Felicity Huffman and the first signs of the impressive practical effects X-Files became known for, Ice is a perfect monster-of-the-week episode, played sumptuously straight.

Though technically including three episodes, Duane Barry, Ascension and One Breath tell one extended storyline following Scully’s alien abduction that follows Scully’s growingly intimate relationship with the supernatural. Beginning with Duane Barry, in which Scully is abducted by a psych patient and purported alien abductee, the following two episodes track her abduction and return. Standing as Chris Carter’s directorial debut, Duane Barry introduces one of X-Files’ best secret informants and sets Scully up for some of the most earth-shattering events of her life. And while One Breath isn’t without its schmaltz, it’s a fitting wrap-up to the intense two-parter that preceed it.

Translated directly as “The hand that wounds,” Die Hand Die Verlezt stands as one of the first X-Files episodes to touch on the horror genre outside of alien mythology. The episode stands as the last written by X-Files masters Glenn Morgan and James Wong before the two left to create a show of their own (which ultimately failed), the episode features a satanic cult consisting entirely of conservative high school teachers and filled with biblical apocalypse aesthetics including a rain of frogs. A perfectly crafted monster-of-the-week episode that exemplifies the best of the series’ dramatic bent.

Paper Clip is a continuation of the third season premiere, which means the episode opens with a perplexing stand-off between Scully and her boss Agent Skinner, but the episode, which sheds light onto Mulder’s family and his sister’s abduction is a high-quality and important mythology episode. Spending time with the Lone Gunman briefly before their ill-fated spinoff and carrying some heavy emotional weight, Paper Clip represents a sea change in the relationship with Mulder and Scully, ending with the solemn, “I’ve heard the truth, Mulder. Now what I want are the answers.”

Hitting a sweet spot between chilling, spooky and heartwarming, Clyde Bruckman’s Final Repose makes a strong argument for season three as the best season of the show. Winning an Emmy for Outstanding Writing in a Drama Series and Outstanding Guest Actor for the late Peter Boyle’s performance, the episode carefully balances humor, quirk and dark elements. If you’re looking for a truly stellar and complex monster-of-the-week episode, this one is as good as any other.

Though the X-Files were developed namely to “scare the pants off of people,” the scariest episodes of the show were often the ones that weren’t supernatural at all. Case in point, Home. Even if you’ve never seen an episode of the show, you’ve probably heard of this one. Reaching American Horror Story levels of depravity nearly two decades before, the episode follows an isolated family found guilty of burying a horribly deformed baby alive. When Mulder and Scully visit the family, they find only brothers. How could the family have bred? The answer is under the bed. Representing Glenn Morgan and James Wong’s return to the show, Home was the first episode in television history to require a TV-MA rating. Even on 2016 viewing, it’s no surprise as to why. 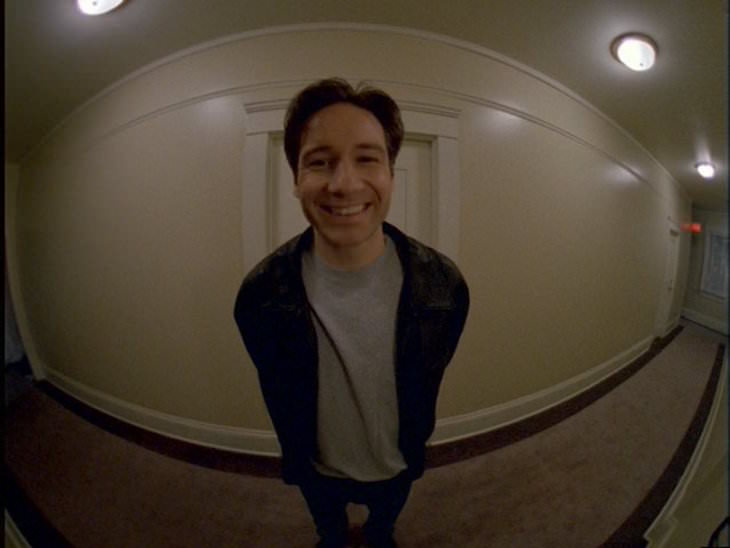 Despite the escalating tragedy of the mythology episodes around it, the X-Files began to lean towards comedy as the show progressed. Penned by Breaking Bad’s Vince Gilligan, Small Potatoes centers around a man with shapeshifting ability who uses his powers primarily to facilitate his life as a sexual lothario. Though the episode sounds simple at the outset, the concept extends in satisfyingly devious ways and reaches to the most scandalous lengths.

Another monster-of-the-week belonging to Vince Gilligan, Bad Blood features a Rashomon-style conceit that pits Scully’s down to earth memory of a small-town vampire against Mulder’s far more sensational one. Starring Luke Wilson as a sheriff alternately charming and hick-ish, Bad Blood is a perfect episode to perfectly articulate the partners’ relationship. The twisty, silly plot structure is just a bonus.

Reminder: The X-Files premieres this Sunday, January 24, at 10ET/7PT

Featured image: Gillian Anderson and David Duchovny on the set of 'The X-Files.' Courtesy Fox.