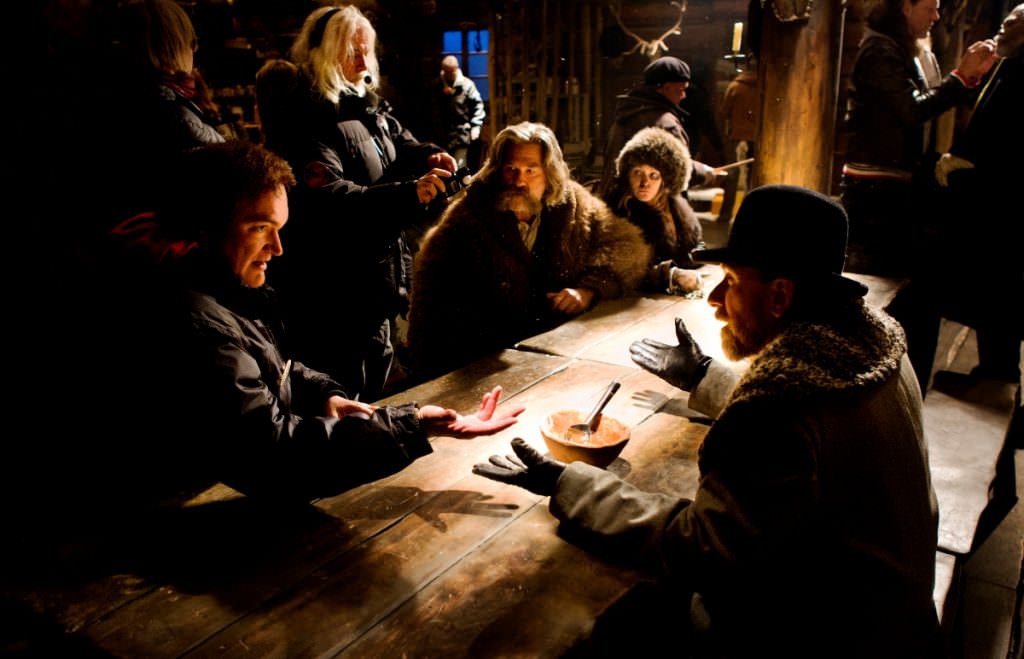 Production Sound Mixer Mark Ulano has been recording and mixing location sound for Quentin Tarantino’s films since 1997’s Jackie Brown. Entrusted by the director with obtaining the best possible recording of his legendary character dialogues, along with the rest of the location sound work, Ulano takes understandable pride in the fact that not a single word of dialogue has ever been replaced [looped] in post-production on their films together. Beginning his production sound mixing career in the late 1970s working on a slew of low budget films produced by Roger Corman and also Canon Films, then jumping back and forth between feature films and interesting TV movies such as director Robert Altman’s The Caine-Mutiny Court Martial (1988), Ulano’s filmography is an eclectic blend, in the best sense, of genre pictures, low budget character dramas, and blockbuster prestige pictures, reading like the filmography of sound recording craftsmen from Hollywood’s Golden Age.

Winning the Oscar for Best Sound in 1997 for James Cameron’s Titanic, in the following years Ulano continued to work on a diverse catalog of films: action thrillers like The Patriot (1998) and Terminator Salvation (2009), as well as his continuing work with Tarantino; comedies of all stripes such as Stuart Little (1999), Big Momma’s House 2 (2006), and Talladega Nights (2006); plus studio blockbusters and small prestige pictures such as Iron Man 2 (2010), The Tourist (2010), The Master (2012, Sound Mixer), and The Judge (2014). We spoke by phone with Ulano about his production sound mixing work on Tarantino’s The Hateful Eight.

What’s the process for you as Production Sound Mixer in obtaining clean sound in such a harsh environment as was this location shoot in the Colorado Rockies?

First it starts with pre-production, and being in conversation with all the parties that are going to set the environment in which you’re working. For example, for the stagecoach scenes I was deeply involved with our stagecoach specialist from scratch, and engaging in conversations about insulation materials from metal to wood contacts for when the coach was in motion – actually being pulled either by real horses or by mechanical means, so that there would be minimal amount of squeak, and other kinds of normal interfering sounds would be kept to a minimum. That was a parallel conversation across the board with all the other departments, wardrobe, construction, camera. A lot of us have worked together with Quentin for years, so there’s this ‘band back together on the road again’ quality about it. It’s really like a musical organization. So prep and interaction with the other artists who are creating the environments for the actors to work in becomes a really key thing. You can’t let that slip by.

But more to the point is the relationship with the director, with Quentin, and with the actors themselves.  I’ve been blessed with working with Quentin for over twenty years at this point, and, this is unique for me in my career, and I haven’t heard this much expressed elsewhere, we’ve never replaced a single word of dialogue in post-production in the movies we’ve done together. Never.

It is incredible, but it’s about the collaboration. For Quentin it’s about capturing a performance he believes in, on the set, on the day, that’s what he wants in the movie. In my work that’s a dream scenario because, that’s my instrument, I’m there, I’m the drummer, I’m there to get that to happen, and keep the beat, and he partners with that. It’s a quiet partnering, but it’s a commitment, and it creates a different kind of result. It becomes part of everyone’s universe when you’re doing it, so everyone supports that, not just Quentin. When’s it clear that the director is into that, everyone else understands. He says, ‘this is how I work, and I need you to support that,’ and it happens.

Is the type of deep prep you did on this film standard in the industry now, or does it vary from film to film?

I would say that as the cream rises to the top, those professionals who have careers of duration and substance have a common theme of this kind of intense preparation. Because once you’re there and on the [shooting] day, and in the flow of it, you don’t have time to finesse all of the information and details the will become essential assets when you’re actually in the flow. It’s like rehearsal, it’s all this prep. And then when you’re there [on set], it’s all about problem solving, because as much as you do know before you get there, the truth isn’t revealed until that blocking happens. Until we’ve been together wth the actors, we’ve seen where the camera is going to go, and we’ve set the stage for how the scene is physically going to occur, that is the roadmap for everything else that we do each and every shot. And the thing that people often forget is that every shot is handmade…

Every shot is a one-off.

It’s never happened before, it’s never going to happen again. It’s a mosaic of a hundred people coming together to make that little two-minute moment with as much commitment and precision as possible so that it creates a flow. And that’s my mission, to capture an uninterrupted experience of the actors actually being those characters, in that time, in that real moment. If that works, then everything else – technique’s not important ultimately, result is what’s important. I don’t care if the drummer plays left-handed. I just care ‘is it music, is it taking me on the ride.’ Essentially everyone who’s in Quentin’s universe is in that same mind-set.