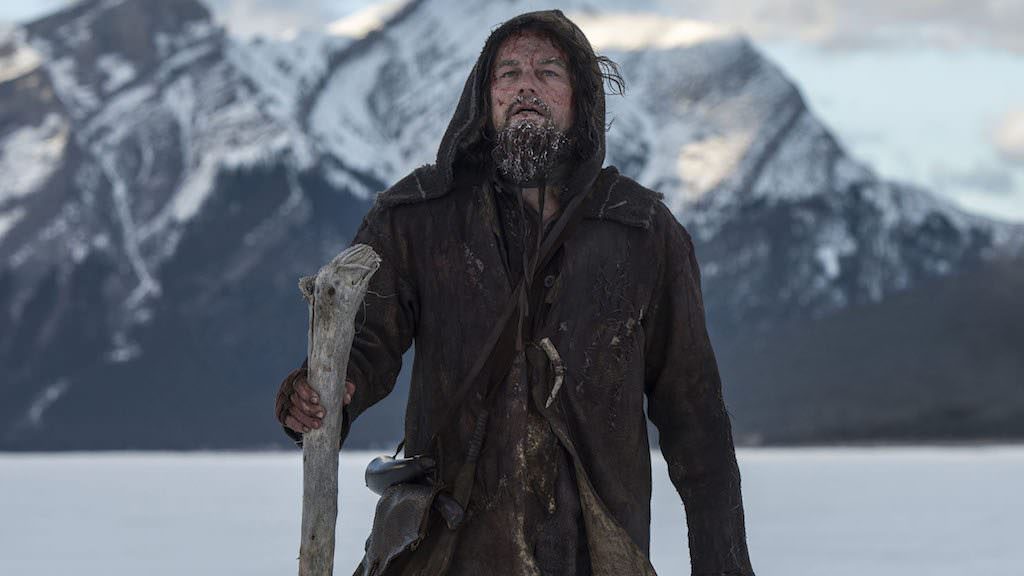 It would be difficult to find an actor more famously snubbed by the Academy than Leonardo DiCaprio. Despite his two-decade long career and his predilection for prestige projects, the actor, who got his start on shows like Parenthood and Growing Pains, has had no luck in turning up an Oscar since his first nomination at the age of 19. Embarking on an unofficial but career-long Oscar campaign with films like Titanic, The Aviator and Wolf of Wall Street, DiCaprio has been consistently passed over in spite of his many acting nods.

This year might be the year that changes things. The Revenant, which has slowly been amassing hype since rumors about the set conditions and Instagram shots of the film began surfacing earlier this year (we'll also be publishing our interviews with the film's costume designer and production designer in the next few days). Abandoning the luxuries of his yacht on the South of France for creature comforts like pausing for naps inside of a horse carcass and slowly freezing in the remote Canadian wilderness, DiCaprio seems intent on delivering an indisputably Oscar-worthy performance, with Tom Hardy and Academy favorite Alejandro González Iñárritu and cinematographer Emmanuel Lubezki in tow.

Though historically DiCaprio’s most respected roles feature the actor as eloquent and verbose (particularly in the most recent The Wolf of Wall Street), The Revenant stars a particularly tight-lipped Leo, seemingly intent on giving one of the most physically demanding and verbally understated performances of his entire career.

And while we can’t be sure that 2015 will be the end of the DiCaprio dry spell, chances seem good that he could come away with the prize for the vengeance thriller. But in honor of his brushes with greatness before The Revenant, here are 10 other impressive performances that left DiCaprio unceremoniously empty-handed that we invite you to cue up this Christmas season.

Despite the fact that the film was ostensibly a vehicle for a young Johnny Depp, the young breakout star was Leonardo DiCaprio, who had previously been known for small roles on sitcoms. Inhabiting the role of developmentally disabled teen Arnie, DiCaprio garnered critical praise and enthusiastic Oscar buzz, surprising for the young actor’s relative inexperience. But when DiCaprio lost the statue to Tommy Lee Jones’ performance in The Fugitive, the young actor kicked off a 22-year losing streak that is just now showing signs of abating.

James Cameron’s epic box office smash catapulted DiCaprio and co-star Kate Winslet into indisputable stardom. And though the film garnered Oscar noms for performances from Winslet and supporting actress Gloria Stuart, DiCaprio was left out in the cold, even losing his Golden Globe nomination to Peter Fonda. Famously, DiCaprio didn’t attend the Oscars that year despite the film’s numerous nominations. Perhaps now DiCaprio has gotten used to the disappointment.

Martin Scorsese’s period saga was showered with Oscar nominations for its masterful direction and Daniel Day Lewis’ astonishing performance, but the Academy neglected to show much love for DiCaprio’s supporting actor performance. A slight made particularly devastating thanks to Lewis and DiCaprio’s on-set rivalry, which was bad enough that producer Harvey Weinstein paid Cameron Diaz to stay on set far longer than she was needed, in hopes she could quell the firestorm of egos. The political hand-wringing notwithstanding, Leo didn’t take away any significant nominations, even with his second collaboration with the legendary director.

Though the Spielberg caper gave DiCaprio equal billing with acting giant Tom Hanks, the film was overshadowed by many films released the same year, seeing supporting actor Christopher Walken as the only member of the cast to receive an Oscar nod. Regardless of DiCaprio’s pitch-perfect portrayal of the great actor and con man Frank Abagnale, this Spielberg and Hanks collaboration failed to find its footing in the 2002 awards season.

Trying again with the biopic format and reuniting with Martin Scorsese, DiCaprio underwent extreme physical transformation for his portrayal of Howard Hawks, the film producer, airplane pilot and eventual recluse. In spite of his impressive performance and the film’s 11 Oscar nominations, DiCaprio was passed over for the best actor statue in favor of Jamie Foxx’s performance in another biopic: Ray.

Trying his hand with more genre-oriented work, DiCaprio took on the notoriously difficult South African accent and some gritty subject matter to lure in a shot at the prize. DiCaprio’s ex-mercenary charmed the Academy well enough, garnering him a Best Actor nomination for the role, but the final win went to Forest Whitaker’s similarly visceral performance in The Last King of Scotland.

Though The Departed quickly became one of the year’s Oscar favorites with four Oscar wins including Best Picture and Best Director, only Mark Wahlberg received an acting nomination for the film. Donning another accent as a southie undercover cop, DiCaprio’s astounding performance was passed over in favor of a nomination for his performance in Blood Diamond. Apparently appearing in two of the year’s Oscar favorites didn’t do much to increase his chances of taking home the coveted Award.

Sam Mendes’ devastating domestic melodrama reunited Titanic co-stars Kate Winslet and DiCaprio to great critical acclaim and strong effect,  but DiCaprio’s riveting performance as the dissatisfied and maladjusted husband did little to charm the Academy. Though Winslet took home a Golden Globe win and co-star Michael Shannon received an Oscar nomination, DiCaprio was passed over by every major Awards outlet for his stirring portrayal of suburban malaise.

Perhaps one of the most shocking snubs of DiCaprio’s career, his portrayal of Tarantino baddie Calvin Candie was passed over for a win in favor of Christoph Waltz’s performance in the same film. Waltz’s charming screen presence did much to nab him the award, but DiCaprio’s chilling turn as sadistic plantation owner saw DiCaprio turn limited screen time into one of the most astonishing scenes of his entire career.

Returning again to work with Martin Scorsese in one of his most bombastic roles yet, the now undisputedly established actor returned to the screen in full leading man glory, this time as a businessman whose corruption and devotion to excess knows no end. Despite the film’s five Oscar nominations (including one for DiCaprio in the Best Actor category) the statue instead went to his Wolf co-star Matthew McConaughey who won for his intense physical transformation in Dallas Buyer’s Club.

The Revenant opens nationwide January 8. DiCaprio's performance in the film is, once again, Oscar worthy. But you probably already knew that.