Have you seen The Force Awakens? If so, great, stick around so we can discuss it. If not, stop reading this article. This piece is going to do a bit of a deep dive and there's going to be spoilers aplenty. I'll give you a minute to bail.

Are they gone? Good. Let's take a look.

The script was penned by J.J. Abrams, Lawrence Kasdan (The Empire Strikes Back, Return of the Jedi) and Michael Arndt (Little Miss Sunshine, Toy Story 3, The Hunger Games: Catching Fire). Arndt was on board from the jump and provided a first pass. The finished film, however, clearly bears Kasdan's imprint. The film is quippier than any Star Wars to date, approaching the wit of Raiders of the Lost Ark, a Kasdan classic. Kasdan also came in with his considerable institutional knowledge of the Star Wars universe, providing Abrams, who's already a pop culture savant, with an even more pleasingly referential script. The call backs to the original trilogy are well handled (we'll get to the overall script design, and it's similarities to the original Star Wars, in a bit), with all sorts of in-jokes involving Chewie's updated crossbow, trash compactors, and Han's inability to pay people back. But what Abrams has said Kasdan really helped him hone in on was how to make The Force Awakens "delightful." As the director told Wired, delighting fans was his operating principle for the most pressurized franchise relaunch in film history: "That was really the only requirement Larry and I imposed on each other: The movie needed to be delightful. It was not about explaining everything away, not about introducing a certain number of toys for a corporation, not about trying to appease anyone. This has only ever been about what gets us excited."

It's safe to say Abrams', Kasdan and the entire TFA team succeeded. If the film was anything, it was delightful. It was delightful on steroids. And the most delightful thing about the film, even more so than the invention of the new droid BB-8 (BB-8 is everything that Jar Jar Binks was not, which is a universally adored addition to the Star Wars universe that's not in any way offensive) and the film's stellar pacing, was the casting of its' three heroes and new major villain. It was pre-ordained by the colossal marketing budget and huge, global fan base that TFA was going to be a monster success. What was far from certain, however, was that the four major new players, Daisy Ridley as Rey, your hero, John Boyega as the former Stormtrooper Finn, Oscar Isaac as resistance fighter pilot Poe Dameron, and Adam Driver as Darth Vader acolyte Kylo Ren would be able to hold their own on screen with the likes of Harrison Ford's Han Solo, Carrie Fisher's General Organa, and Mark Hamill's Luke Skywalker. That they would fare better than Hayden Christensen and Natalie Portman did in the prequels was not the bar that Abrams was setting, he was putting them in a film with the major players from the original. The bar was; could the new actors possibly warrant the monstrous hype this film generated and hold the screen with legendary characters from the original trilogy? That they could, that they so clearly did, is the biggest coup Abrams managed. And it can't be understated how monumental it is that Abrams cast a young woman as the hero, a young black man as her resilient side kick (and potential love interest), and a young Latino to round out the Star Wars universe's mandated triumvirate. No decision was met more admirably, and more effectively, then the decision to bring on these fantastic young stars. 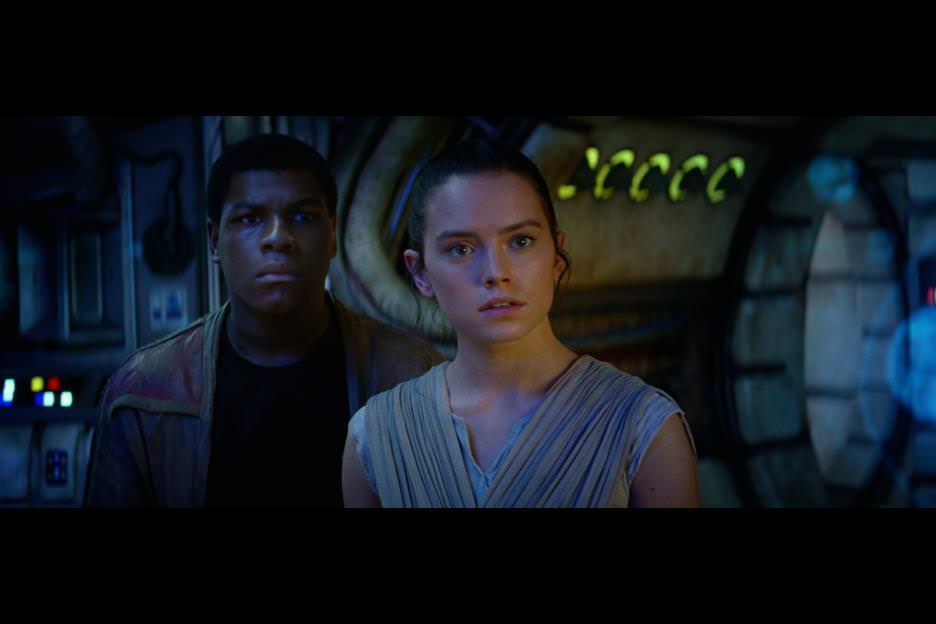 There's just no way to talk about The Force Awakens without talking about the very first Star Wars, as the plots are very similar. The iconic backwards, titled opening crawl of The Force Awakens informs us that Luke Skywalker's missing, and in his absence the First Order, the bastard child of the Empire (and impressively huge and galaxy spanning in just 30 years, somehow), is on a mission to kill Skywalker, the last Jedi. Fighting the First Order is the Resistance, on behalf of the Republic (which we never really see or have any sense of what is has become since it was saved from the Empire at the end of Return of the Jedi), led by General Leia Organa. Leia sends her best pilot, Poe Dameron, to the barren wasteland that is Jakku, where an old ally has information on where Luke is. It's a tidy little story. It's also, again, remarkably similar to the original Star Wars. We'll discuss. But first, let's look at the great opening scene.

Before we quibble over the plot, I'd like to tip my cap at the estimable pacing of TFA. At a brisk 136 minutes, The Force Awakens clocks in under the last two installments of the prequels and is a minute or two longer than the longest of the original trilogy, The Return of the Jedi. There is hardly any fat on the film. It opens swiftly, introducing four major characters (BB-8, Kylo Ren, a skittish Stormtrooper who will turn out to be Finn, and Poe Dameron) during a nighttime raid in which the stakes are immediately set.

A nighttime raid on Jakku to find the map that leads to Luke Skywalker. Courtesy Walt Disney Studios/Lucasfilm

Dameron meets with Lor San Tekka (Max Von Sydow, no less), who gives BB-8 a galactic flash drive of sorts that contains a partial map of Luke Skywalker's whereabouts. This is your MacGuffin, and it's a solid one. The First Order, militarily led by the out-of-control Ren, and magesterially led by General Hux (Domhnall Gleeson, who gives a scarily Hitler-esque speech at a Nuremberg-Rally-Meets-the-First-Order rally later on in the film) will stop at nothing to get this map. No more than a few seconds after BB-8's got the map, Jakku is under attack.

Dameron is eventually captured by Ren, but not before sending BB-8 off with instructions to get as far away from Ren and the carnage as possible. In just a few minutes, we're given crucial snapshots of these characters. They are as follows:

When Ren faces off with a captured Lor San Tekka, we're given our first little clue into where this is all heading. Tekka tells Ren that he knows who he really is, and that he wasn't born with the name he now uses. This sets up a later reveal (that's really not that surprising, however), but perhaps more crucially, it gives Ren a chance to show what makes him an exciting new villain—he's too passionate, too angry, and barely in control of his powers, let alone his emotions.

What's more, it's the way Adam Driver moves as Ren that is so refreshing for this franchise. Ren is less like the hugely powerful, hulking, stiff Darth Vader and more like the impressively, scarily physical Darth Maul. Yes, a dreaded prequel callback! While Ren's characater is connected and indebted to Vader in a few ways (he actually doesn't need the mask, which Vader did, which is a wonderful bit of characterization for a character who wants to be Vader so bad that he wears a scary black mask he doesn't need, which multiple characters call him out on), it's Driver's physicality that is something to behold. The way Ren moves through space is glorious. Whether he's walking through a driving rain or destroying the interior of his own ship in a fit of pique, the power he has beneath that mask and in his body is palpable. You can see it in how he wields his lightsaber, how he walks with forceful, quick strides, and you can see that he's not even close to having control over it. Driver, a former marine, imbues Ren with a human strength, which is far from Vader's reconstructed, half-droid lumbering gait, and more in line with the explosive, volatile Maul. Just watch the way Ren wields his infamous hilted lightsaber to cut down Lor San Tekka—it's pure ID at work there, pure rage, and it's thrilling.

Once Ren has Dameron hauled onto his ship as a captive, he orders the mass execution of the rest of the villagers. This leads us to another great moment—when Ren senses the unease of a freaked out Stormtrooper, who's standing by the killing circle but not participating. It's just a few seconds, but it nicely gives you an idea of Ren's considerable power (moments before, he'd stopped Dameron's attempt to shoot him with a blaster with the power of the Force, the crackling laser suspended in mid-air in front of a stunned Dameron) and hints at his ability to not just read people's emotions, as he clearly does Finn's in this brief moment, but perhaps nods at his own internal battle. All of this happens in just a few minutes. It's a thrilling start.

Just how closely does the plot mirror the first Star Wars? An orphan on a desert planet comes into contact with a droid carrying crucial information in which the fate of the galaxy rests. The orphan is actually very powerful, a fact that will be gleaned over time, and, after meeting a key mentor, will play a huge part in taking down a planet-sized weapon harnassed by a evil organization hellbent on conquering the galaxy and bringing it to heel. This is both Star Wars IV: A New Hope, and Star Wars: The Force Awakens. In fact, TFA features another Death Star, only this one's much, much bigger and even more powerful. There's even a wacky bar scene with assorted alien rogues! The plots are mirror images of each other, with the key differences being the gender and races of the heroes (actually, you've still got the two men/one woman, only this one's turned on its head, with the Luke character now Rey). There's no way of denying this, and it's up to you whether you find this a clever way to give fans what they want, all over again, or simply a way to take some of the monumental pressure off the filmmakers' shoulders.

When Rey saves BB-8, and the adorable rolling droid begins to tail her everywhere, you settle into the story having a good idea of where it's going, yet if you're anything like 99% of the people and critics (yes, critics are also people) who saw the film, you probably found it impossible not to enjoy the ride. The chemistry between Rey and Finn is immediately apparent and, again, is the real key to this film. Let's take a look at some of the big plot points:

In sum—The Force Awakens was delightful, it succeeded on many levels, and if it wasn't the most original thing you've ever seen, if it didn't quite reach The Empire Strikes Back's high bar, it was a satisfying and impressive way to kickstart a new generation of Star Wars films.