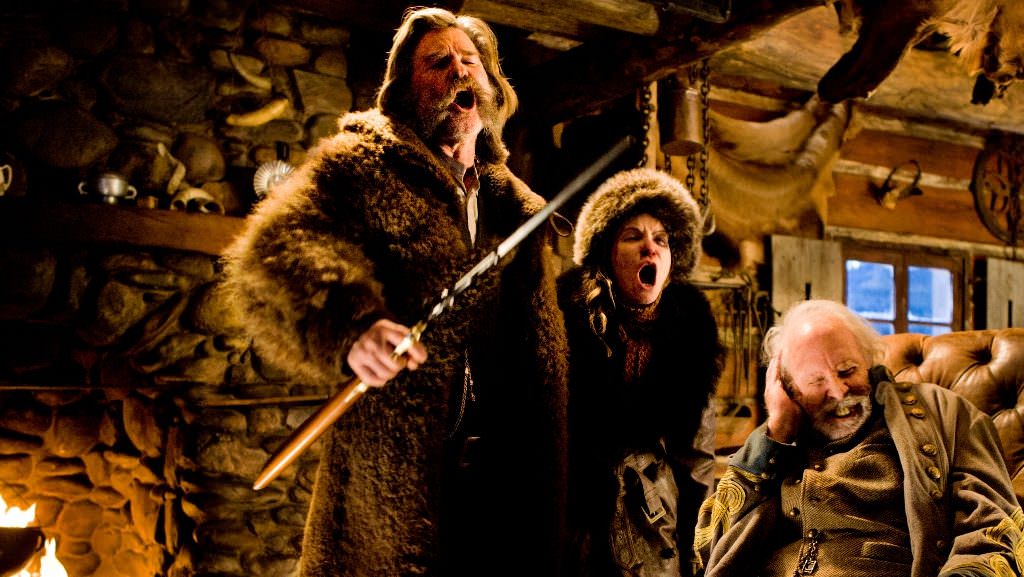 Camille Friend, Hair Department head on The Hateful Eight, will be celebrating twenty years in the business in 2016, and her filmography contains a bevy of memorable character looks which stand out in our movie culture. She has been department head hair stylist on several Eddie Murphy pictures including Dr. Doolitle 2 (2001), his Academy Award nominated role in Dreamgirls (2006), Norbit (2007), Meet Dave (2008), and A Thousand Words (2012). She was Key Hair Stylist on 8 Mile (2002) with Eminem and Ray (2004), in which Jamie Foxx received the Best Actor Oscar for his role. Some of her more recent work can be seen in tentpole action films and smaller genre pictures such as: The Spirit (2008), The Hangover (2009), The Hunger Games: Mockingjay – Part 1 and Part 2 (2014, 2015), Captain America: The Winter Soldier (2014) and the upcoming Captain America: Civil War (2016). She also made many a memorable do on Tarantino’s Django Unchained (2012). We spoke by phone with Ms. Friend on the same day she was nominated for a Critics’ Choice Movie Award from the Broadcast Film Critic’s Association in the Best Hair & Makeup category for her work on The Hateful Eight.

Can you describe your pre-production process on  The Hateful Eight? How much of the look of the characters is in the script? How do you work with Quentin and the actors to achieve their distinctive looks?

Basically, when you get the Quentin script, you’re so excited your getting to do the Quentin movie, your riding high on that. Quentin is the greatest for an artist because he allows us to express ourselves, he allows us to try different looks and be creative. He’s a great collaborator.

During the prepping process on The Hateful Eight, it was meeting with Quentin – and usually we have several meetings with him, just hair and makeup departments – where he can go over his vision, and we can show him picture research, and we can bounce ideas off each other’s work. Sometimes the meetings are short, sometimes they’re two to three hours long, and he’s really great about allowing you to think about different things, and try different things. Also, he has specific ideas, like for Sam’s [Jackson] character, he definitely had specific ideas, photos that he showed us. 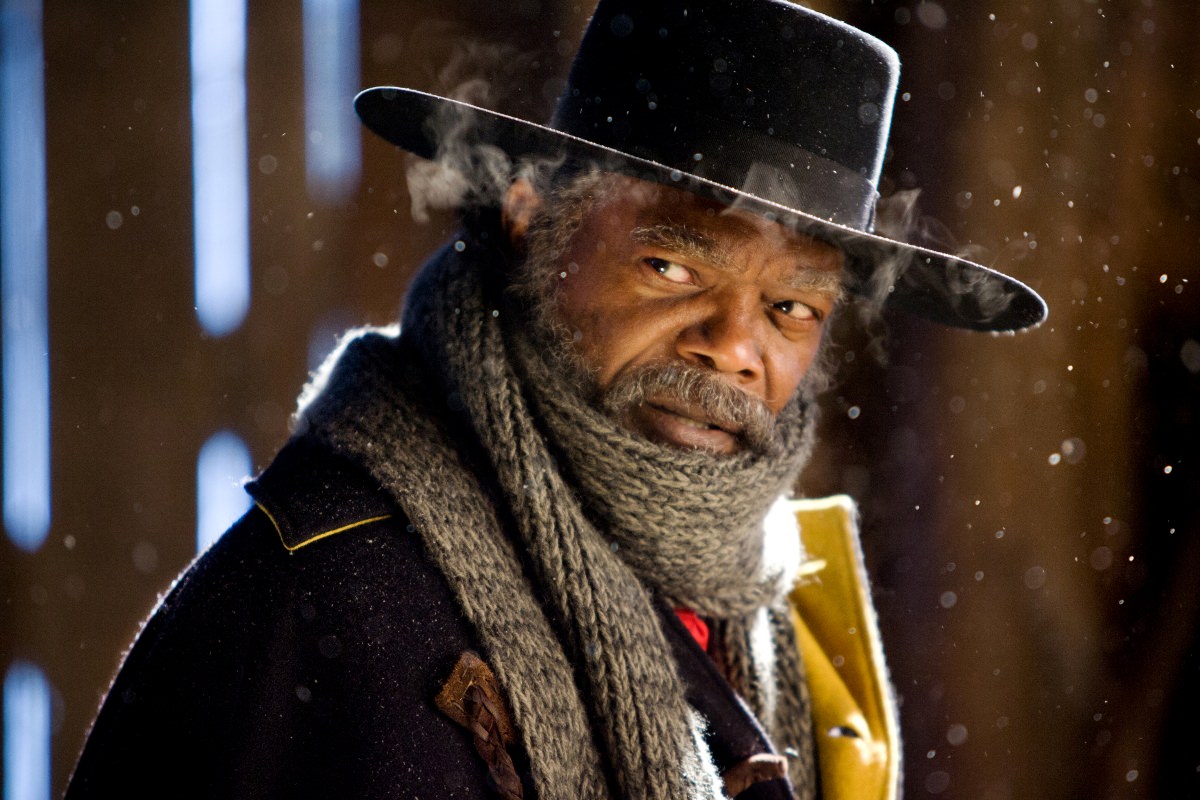 In addition, Sam is very specific about what he wants to look like. So between the two of them, it’s about meeting them in the middle, deciding what we were going to do and how we were going to do it, how many [hair and makeup] pieces we were going to apply to him, and then trying all those things out. And Sam’s great, I’ve known Sam for twenty years, it’s great to work with him, he’s a great collaborator. Whenever you need Sam for a fitting or to try on something, he’s always available, you can text him and he’s like ‘come by the house we can try on the wig.’  He’s always there supporting what you do, and is there, available, for the collaboration.

Most of the male actors have beards, or bushy mustaches like Kurt Russell’s,  which I would think can be tricky to maintain throughout the shoot. I assume that’s all their hair and not hair prosthetics, for the most part?

It is tricky. And let me say, Quentin likes everybody to be as natural as possible. He does let us use [hair] pieces, but he does like people to grow [their beards]. And thank god, people know in advance, they’re going to be in a Quentin movie, everybody’s facial hair, all their hair, they grew it. Then we have the options to make it shorter etc…for what we’re going to do. And let me also say, on the record – Kurt Russell has the most incredible head of hair that I’ve sen in my life! All men in their sixties are jealous of him. Even women are jealous of him! 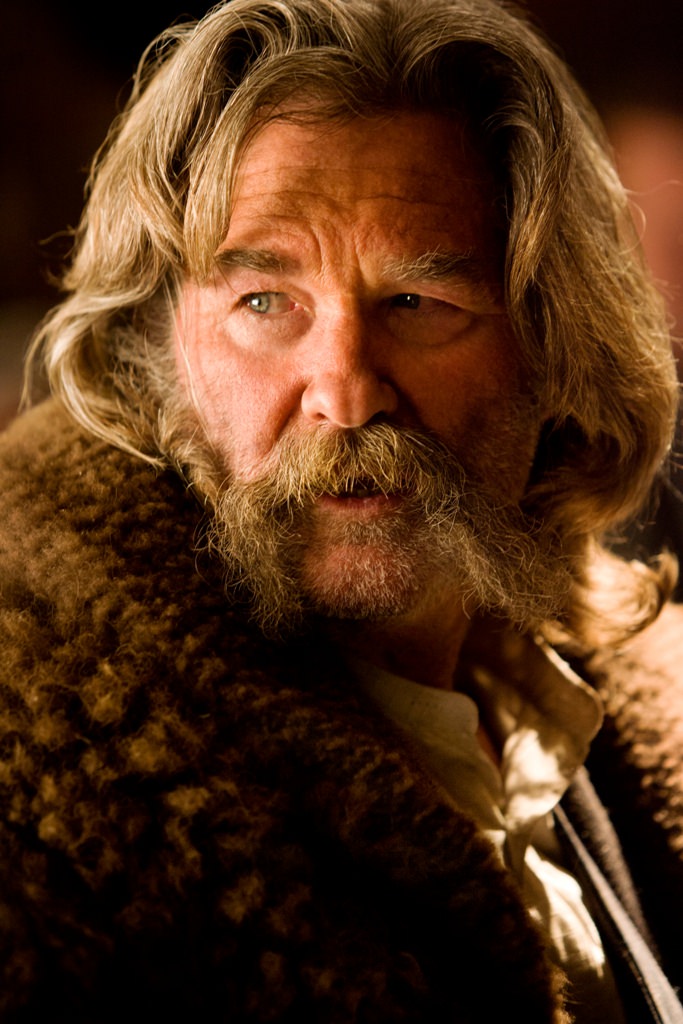 His mustache was mighty impressive. It must be logistically complex to keep track of all the actors looks throughout the arduous production process?

Yes, during production we’re trying to keep the integrity of everybody’s look throughout the story, which basically occurs in a day. We’re also working with the make-up and special effects departments, with costumes, so everybody can have their own distinctive look. And then we were very strategic about cutting the hair, because Quentin definitely does no want the hair to look like it was freshly cut, freshly done. It needs to look like it’s worn and dirty, so keeping those levels up was important. We cut the hair approximately every three weeks. We kept a calendar for everybody so we knew when best to cut their hair. So this was all to maintain those specific looks. because Quentin has the eagle eye. He can tell if here’s not enough product in it or if we trimmed it, so we’re there to support him and make sure we get it right for him.

Jennifer Jason Leigh’s character goes through some startling changes, shall we say, in the last part of the movie. What’s it like trying to create and maintain those different looks?

That’s all her hair. Not a wig. The only thing we did – I did her hair in what I call four sections – we went through the entire script for continuity with Quentin, and we went though it with Mary [Kitrosser] our script supervisor, to breakdown where we wanted to see the dishevelment, where we wanted to see Jennifer look a certain way in the movie. So I did her hair in four sections to create the hairstyle, so at any part of the shooting day, if we’re doing, say scene 50, and her hair needs to look like in what we’d call her second change, I could take down section one and section two, and do it quickly. Or if I need to put it back up, if we need to go back to the beginning of the script, I could do that quickly. So I did the continuity for hair during production so we could stay on top of it and keep it correct. Towards the end, what you’re asking about, I just used a different process to make her hair really big and really messy, and we put a lot of stuff in there. She has dirt in there, blood [effects] in her hair. When a blood explosion goes off, and you get hit, that’s what you have on you. We’re not changing it. We’re not cleaning it up! Jennifer Jason Leigh at the beginning of the story, her hair relatively untouched. Courtesy Weinstein Co.

And then over the duration of time it takes to shoot those final scenes, your working on keeping continuity of the look?

Yes. We put it all back in. We take extensive pictures on set. When somebody gets shot, everybody freezes after cut is called, nobody moves, and the crew runs in with their cameras so we can all get different pictures for whatever we need because the look must stay exactly that way. Because we’re layering [the look] as we keep going through the script. 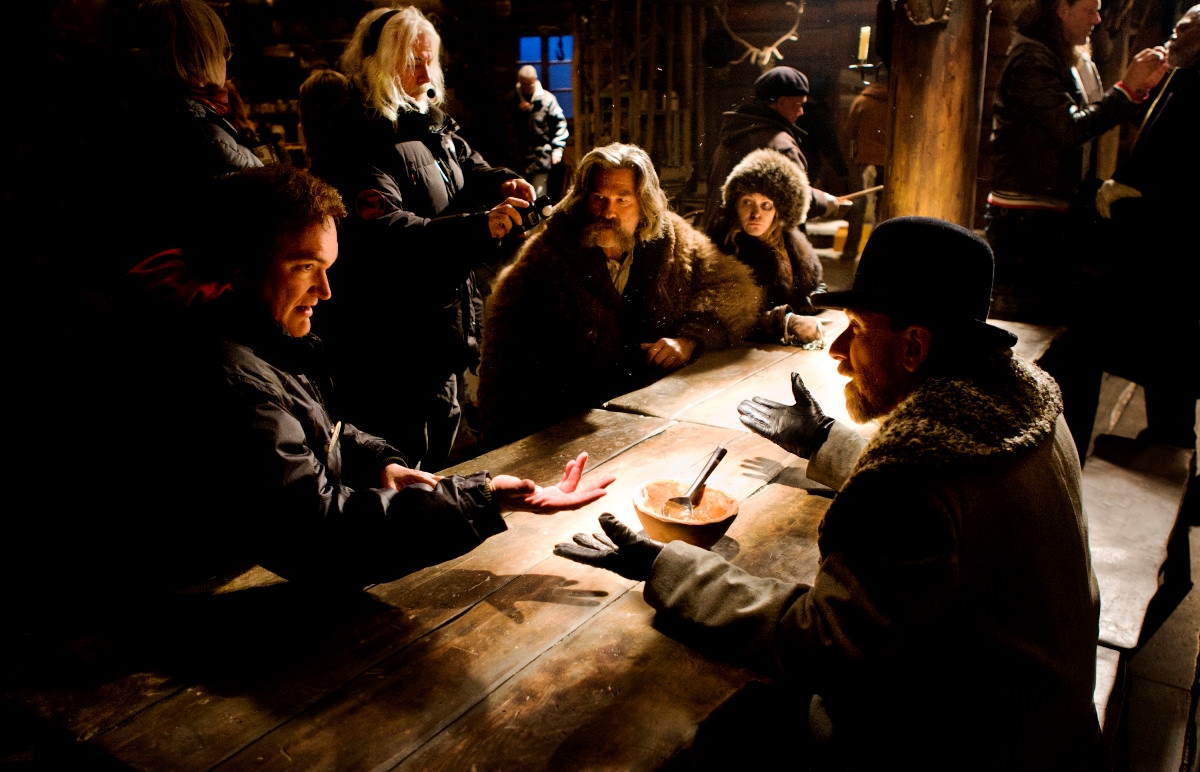 I’d think having to work with the characters all wearing different hats, cowboy has, winter hats, etc…presents a lot of challenges to your department.

Yes. A lot of days, if we don’t know whether it’s going to be a – what I call ‘hat on, hat off’ – day, even though we always do a complete breakdown of the script, sometimes we don’t know where we’re gong to be [shooting, due to weather on location], we try to do a little trick: when we style the hair, we create a hat line in the hair. So if that day, they’re going to have their hats off, from the previous scene in the timeline [of the story, when hats on] you’d still see a hat line, which helps keep continuity.