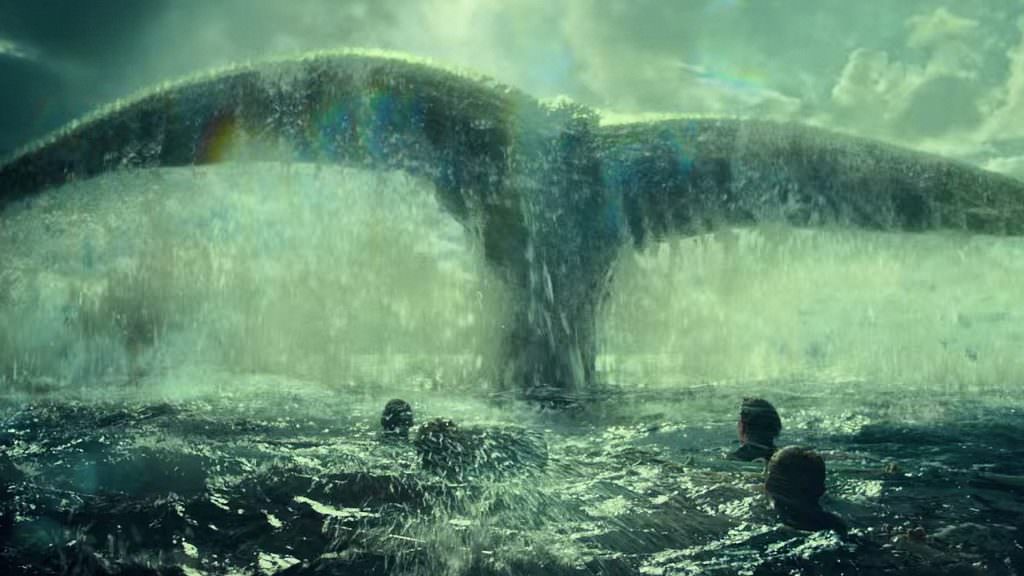 This is the moment in Herman Melville's iconic "Moby-Dick" that the titular white whale is spotted, the demon that mad Captain Ahab has made the Pequod's suicidal mission. It's one of the most breathtaking moments in American literature, coming on page 624 (in the Barnes & Noble Classics edition, at least), on chapter 133. For the final three chapters of arguably the greatest piece of literature in the American canon, Melville's Moby Dick rages from page to page, the greatest monster ever created.

Of course Melville didn't invent his white whale of "unexampled, intelligent malignity" out of whole cloth. Ron Howard's In the Heart of the Sea, which opens today, and which is based on Nathaniel Philbrick's book "In the Heart of the Sea: The Tragedy of the Whaleship Essex," is the true origin story from which Melville got the idea for his masterpiece. The Essex was a Nantucket whaleship that ran into particularly malicious sperm whale in 1820,  some 2,000 miles from the western coast of South America. This massive, white-browed monster destroyed the ship, and the sailors it didn't kill it sentenced to a possibly worse fate; resorting to cannibalism to survive. "The whalemen of Nantucket were very much like the fighter pilots of today, with the right stuff," Howard says in a making-of featurette we've embedded below. "They swaggered up and down main street, they went out and battled the mightiest creatures on earth, they made a lot of money…these guys were cool." Yes, until they met a whale who seemed to be hunting them.

Although Howard's film is based solely on the hideous fate of the Essex, Melville is also said to have drawn inspiration from Mocha Dick, an albino sperm whale that hunted, and haunted, in the waters off the Chilean island of Mocha. An explorer named Jeremiah N. Reynolds wrote about Mocha Dick in the May 1839 issue of New-York Monthly Magazine, which Melville was said to have read. Reynolds wrote: "This renowned monster, who had come off victorious in a hundred fights with his pursuers, was an old bull whale, of prodigious size and strength. From the effect of age, or more probably from a freak of nature… a singular consequence had resulted – he was white as wool!"

In Melville's telling, Moby Dick is described as being perhaps the largest sperm whale that ever lived, and he's given all sorts of gruesome details to enhance his mythic grandeur. Ahab tells the crew of the Pequod that they'll be able to spot Moby Dick due to his deformed jaw, his strange spout, a deformed jaw, three punctures in his right fluke and the harpoons still sunk in his flanks from previous unsuccessful attempts at hunting the monster. It goes without saying that when Howard and his filmmaking team set out to make In the Heart of the Sea, the one character they had to get right was the whale. Here's how they did it.

“The behavior of sperm whales was something we researched and analyzed as a team," Howard says in the production notes. "We met with ocean mammal experts and marine biologists to get a better understanding of their behavior. What interested me most was why this happened. A ship being relentlessly attacked by a whale was unheard of, unparalleled; it was the most freakish thing. I came to believe that this animal was pushed to the breaking point leading to an inevitable clash.” 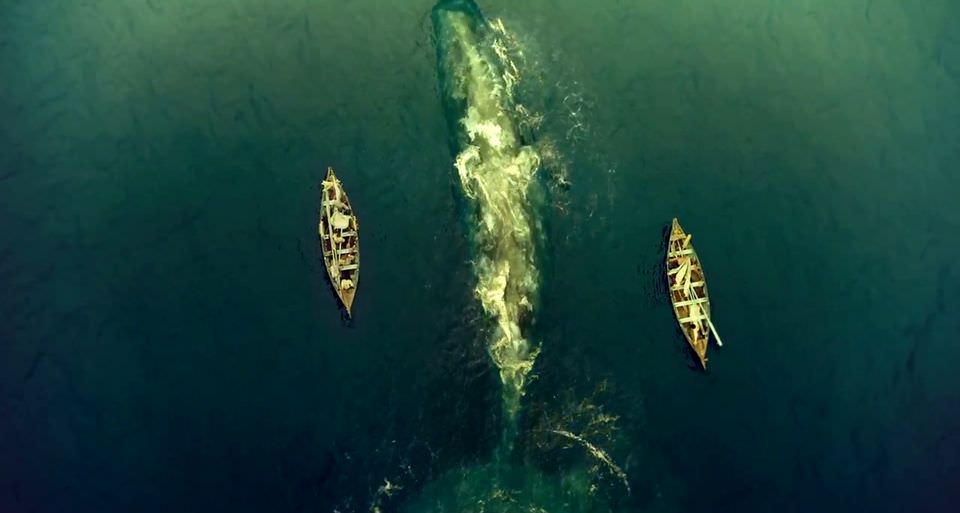 One of the people Howard relied on to help execute his vision for creating the most legendary creature in literature was his production designer Mark Tildesley. What they found out is that a purely white whale might not work (it should also be noted that Melville's "white whale" was actually more brindled; Moby Dick's brow was 'snow-white' but his body was stripped and patchy with white and gray.) “We needed to make sure the whale feels like a living presence in the film," Tildesley says in the notes. "We tried a few images of white whales and they looked fantastic, but, unfortunately, the pure white also engendered a very ethereal, calm image. But in our research we learned a lot of older whales start to lose their skin, so we made the whale darker, but you see the white coming through in patches where the skin has flaked off.” 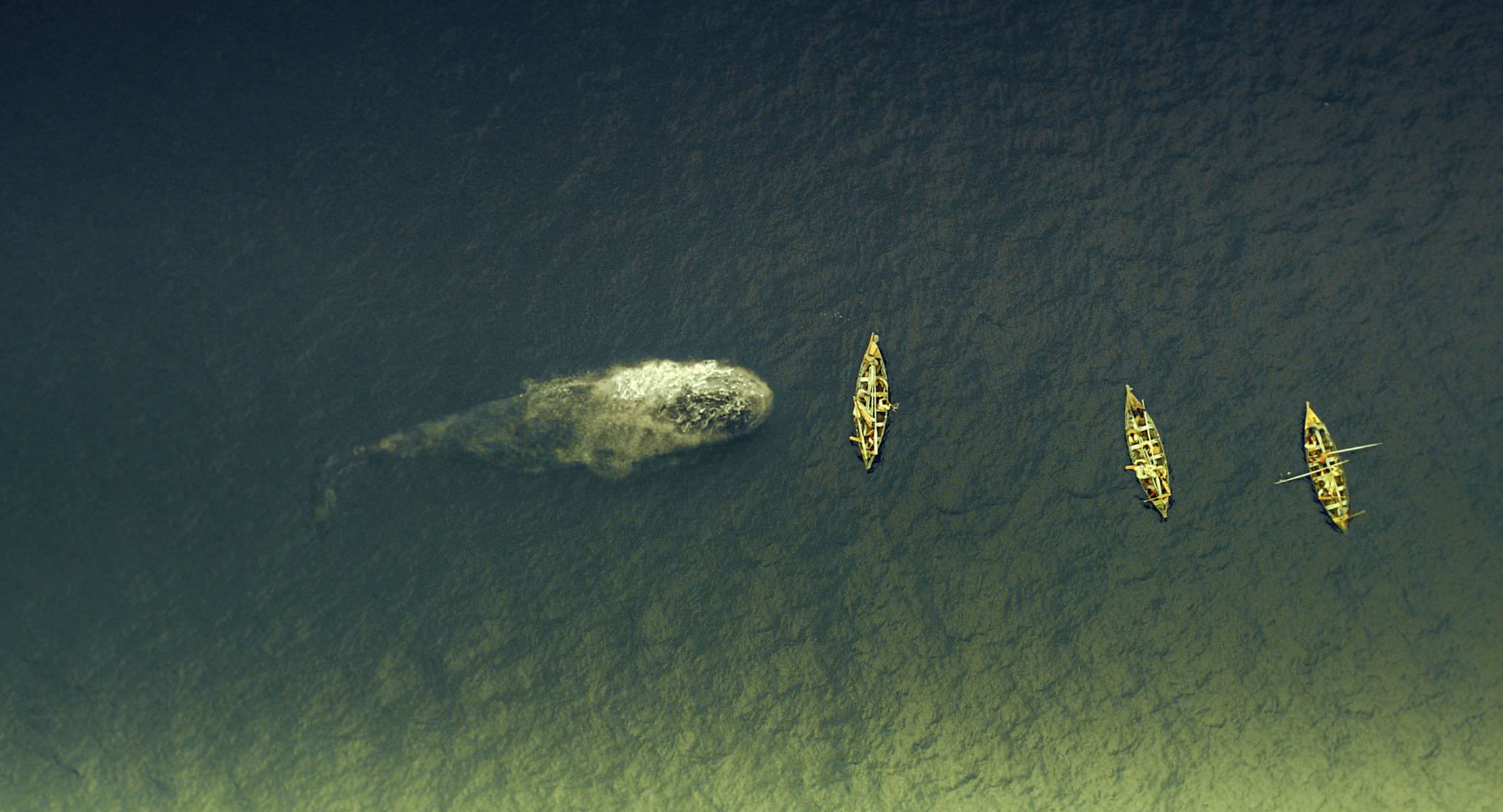 Visual effects producer Leslie Lerman made sure that the whale was properly marked and scarred, as Melville's Moby Dick was in Ahab's telling.  “He is also scarred from previous battles with humans and other predators, so his appearance conveys the harshness of his history,” she says in the notes. Lerman and her VFX team, led by supervisor Jody Johnson, wanted to make sure they created a suitably massive whale that still maintained its' credibility. “It was particularly challenging, with a creature of such immense size and power, to push the envelope without going over the edge because we didn’t want to pluck the audience out of this real world and take them into a fantasy realm," Johnson says. "Each time we conceptualized an action sequence that involved the main whale, or any of the whales, we sent it off to our experts and we’d discuss how plausible it was and what other behaviors they might suggest. It gave us a great spectrum from which to work.”

The filmmakers were well aware that in the end, it would be the whale's sheer size that would give it it's power to thrill and terrify. While Melville writes that sperm whales can reach a length of 90 feet, in reality, no sperm whales that big have been found. Yet in Howard's film, the whale that comes calling on the Essex measures 95 feet long, weighing "approximately 80 tons, with a tail spanning 20 feet… by contrast, the other male sperm whales they encounter measure just over half as long, at about 52 feet," the production notes state. Producer Paual Weinstein says that despite the whale's size, what distinguishes him is the fact that he's "the voice of nature saying 'Enough!'"

Paula Weinstein remarks that the enormousness of this whale is not all that distinguishes him. “To me, he is the voice of nature saying ‘Enough!‘" Weinstein says. "He is a protector who is telling them in the only way he can to stop invading his waters and killing his family," Weinstein says. "And given the times in which we live, that’s very important. I think the audience will want Chase and Pollard and the other men to survive and make it home, but at the same time they will be cheering for the whale. It’s that mix of emotions that makes it all the more compelling.”

TAGSIn the Heart of the Sea Warner Bros