From Germanic Folklore to Hollywood, the Spooky Arrival of Krampus

With Michael Dougherty’s holiday horror film, Krampus, out this week, the Christmastime demon counter to St. Nicholas finally lands in the U.S. This pre-Christian figure of Germanic folklore, who accompanies jolly old St. Nick into town every December, has until recently been limited to visiting his terrors on Austrian, southern German, and Scandinavian children. Having gotten his green card thanks to Hollywood, American kids will finally be appropriately punished for their sins all year long learn about the dark flip side to presents and reindeer and cookies left out next to the tree. Rather than a mild fear of being skipped over by Santa for being naughty, they can now expect to be abducted or whipped by the horned, hooved, and all together quite frightening Krampus. At last! Or, in the case of Krampus the film, they might even have their entire families hounded and terrified at length, while the power goes out all over town, and the snow just won’t stop falling.

Krampus obviously couldn’t arrive stateside without doing it in a big way, and Dougherty’s version of the folktale sees a picture-perfect but dysfunctional family, headed by mom Sarah (Toni Collette) and including Adam Scott, Allison Tolman, and David Koechner, learn that the true meaning of Christmas isn’t about Black Friday and family squabbling. This isn’t quite in keeping with the historical European Krampus of yore, so we broke down the major differences between Germanic Krampus and Hollywood’s take on the demon.

Traditionally, Krampus is portrayed as horned, cloven-hooved, and dark and shaggy. He has four legs but carries himself erect. How terrifying he looks waxes and wanes according to location, social trends at the time, and so on. Our German consultant on Krampus, for example, who grew up in Bavaria in the late eighties and early nineties, recalls annual dual visits to his elementary school from St. Nick and Krampus. Even though all the kids knew the Krampus was in fact their extremely tall school janitor, he was suitably terrifying, and they learned to anticipate the yearly charade with a mix of happy excitement and total dread (which is good preparation for adult life, if you ask us). To that end, kudos to the Krampus film’s costume designer, Bob Buck, and the makeup team, because the movie version is fairly true to the scariest takes on his historic counterpart. 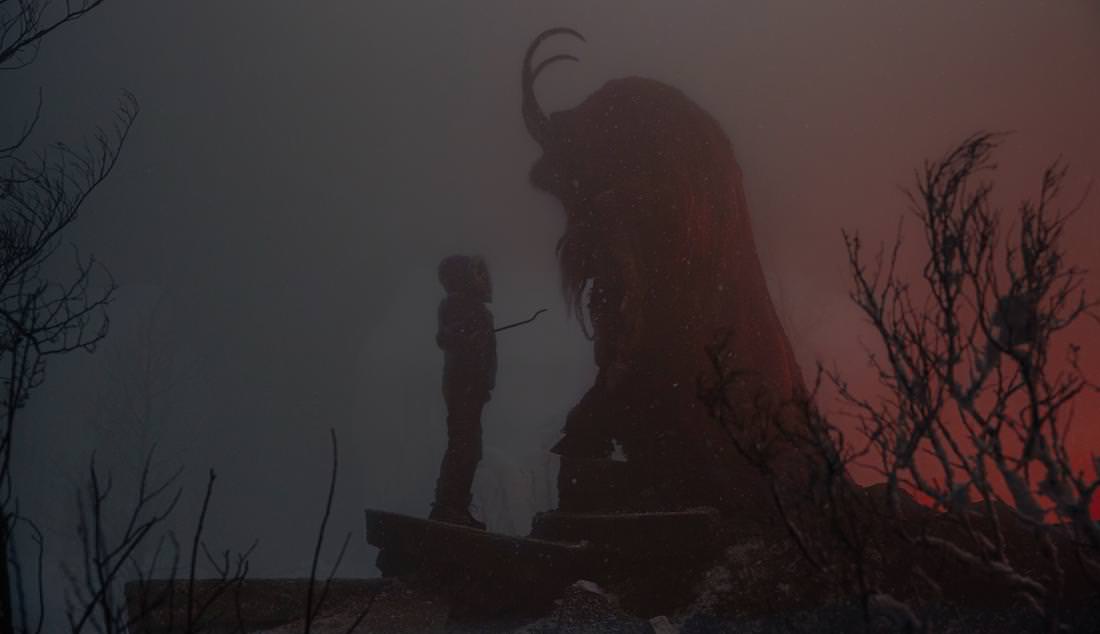 Max (EMJAY ANTHONY) comes face to face with Krampus in Legendary Pictures' "Krampus", a darkly festive tale of a yuletide ghoul that reveals an irreverently twisted side to the holiday. ​Photo by Steve Unwin. Courtesy Universal Pictures.

It’s a little odd that a demonic spirit who embodies the antithesis of Christmas would arrive to punish a young boy, Max (Emjay Anthony) for being disillusioned with the holiday, as it comes to pass in the film. But without darkness, there’d be no light, or something like that, so perhaps Hollywood’s Krampus is just wreaking havoc to teach Max to appreciate Christmas, in order to perpetuate the holiday and ensure his own demonic place in the world. That said, traditional Krampus shows up to punish children, and only children, for being bad for a multitude of different reasons, all year long.

Hollywood Krampus has way more henchmen than his Germanic forebearer. In traditional folklore, his main tools are limited to a washbasin (for the carting away of bad children, inefficient as that sounds) or a giant sack for this same purpose. Krampus is also known to sport a whip made from birch branches, which is presumably comes in handy both for hitting bad kids and for the demon’s post-Krampusnacht cool-down day spent relaxing at a sauna. When in Northern Europe, you know? Anyway, in comparison, big screen Krampus really needs to trim his squad. Perhaps this family is just so terrible he needs back up, but it seems like there are entirely too many evil snowmen, demented stuffed animals, possessed vintage toys, etc.

Omi (KRISTA STADLER) encounters the wrath of Krampus in Legendary Pictures' "Krampus", a darkly festive tale of a yuletide ghoul that reveals an irreverently twisted side to the holiday.​ Courtesy Universal

The main problem here of course is the sheer scope of big screen Krampus. In traditional mythology, he’s a demon but a selective one, showing up to make bad kids duly regret the poor choices they’ve made all year long, such that they are now going to be abducted, sent to Hell, drowned, or eaten. However, this is done without disturbing the good little children who deserve their visit from St. Nicholas, and Krampus traditionally doesn’t go after entire families. But maybe that’s just how bad things have gotten in America—Krampus is here to punish entire towns.

Movie Krampus’s timing is problematic, because he’s about three weeks late. Krampusnacht is on December 5, but Hollywood Krampus arrives to punish the main character, his family, and everyone else around, just after little Max declares Christmas has been officially ruined. Is this supposed to be a special late (or very early, depending on your perspective) visit, or is Hollywood Krampus just a typical Los Angeleno, aka, never on time? Perhaps Krampus crossed the pond to terrorize bad Americans after taking care of business in Central and Northern Europe, plus grabbing a short breather. Nobody said punishing children was easy work.

Late or not, Krampus has been officially immortalized in a holiday-season Hollywood blockbuster, which, for a mythical Christmas spirit, is pretty much equivalent to a new citizens’ welcoming ceremony.  Enjoy America, Krampus.