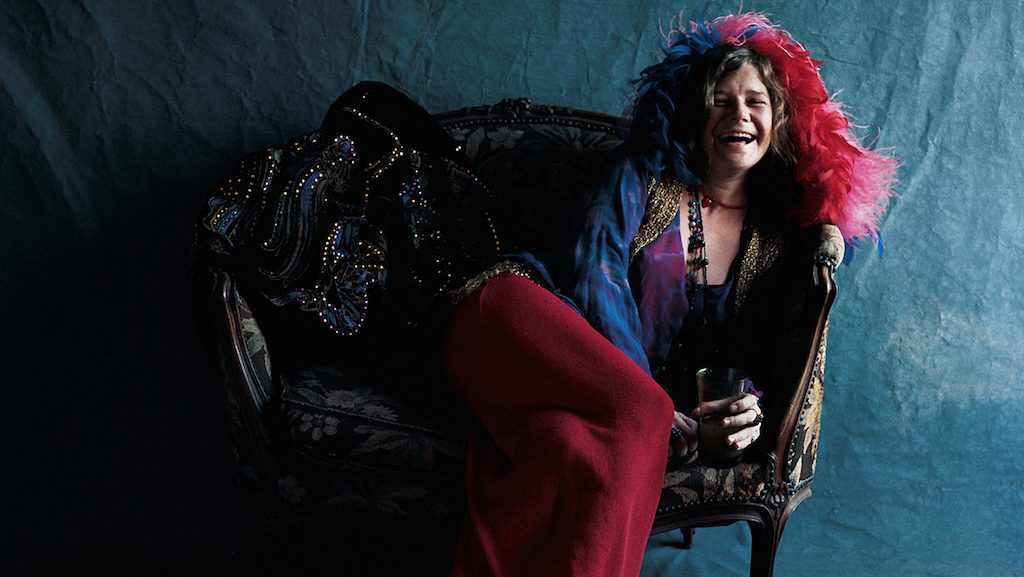 Director Amy Berg is best known for her hard-hitting investigative documentaries, particularly the Oscar-nominated Deliver Us From Evil (2006), about clergy sex abuse, and West of Memphis (2012), about the rush to judgement in the murder convictions of three young men in Arkansas who were released after spending nearly 20 years in prison. The prolific Berg also made An Open Secret, about the sexual abuse of teenagers and children within the entertainment industry, and Prophet’s Prey, an expose of controversial Mormon leaders.

But Berg’s Janis: Little Girl Blue is not entirely a departure. The new documentary examines the life and career of ‘60s rock/blues icon Janis Joplin, who died of a drug overdose in 1970 at 27. But Berg’s aim was to dig beneath the persona and the myth, not to find anything sensational but just the opposite. Joplin’s legacy, says Berg, “has become a cliche that doesn’t serve the longevity of females in rock; but it’s this Southern Comfort drinking woman who died of a heroin overdose in hotel room. And she’s so much more than that.” Berg set out to do nothing less than show Joplin as a disciplined, creative artist and influential musician who had the love and respect of many of her peers.

Bringing Joplin’s story and legacy to new audiences was the wish of the surviving members of the Joplin family, Janis’s brother Michael and her sister Laura.

“After I made Deliver Us From Evil, I heard about this opportunity, that the [Joplin] estate was meeting with people at that time. I’ve always been really a big music fan and loved Janis Joplin since my teen years so I was exited about collaborating on the film. Fortunately, the estate chose me as the filmmaker after meeting with people. It’s been a long, winding road with a lot of roadblocks along the way but we made it to the finish line, finally,” says Berg who spent seven and one-half years on the film.

The reasons for the delays are typical for films that require licensing of music and archival material. “The licensing, the existing contracts, the exclusions, the holdback windows, the letters  — all these things I wanted to use in the film that I needed others’ approval to use,” says Berg. Her research included the major archive houses as well as supplemental arenas, such as “word of mouth, chat rooms where people basically share archive information and put up posts.” But a lot of those were dead ends, says Berg. “Promised gold mines turned into something different, [footage] wasn’t even Janis. You have to wait many months to even get historical societies to look at what you need to see, so it is an endurance test, for sure.”

All that digging unearthed some never before seen footage. Berg’s personal favorite moment is footage of Joplin playing acoustic guitar and singing Me and Bobby McGee backed by the Grateful Dead on the train nicknamed Festival Express. (The 1970 train tour through Canada was the subject of the 2003 documentary Festival Express but it does not include that clip.) There was also the 1974 Canadian documentary Janis directed by Howard Alk, which offered some of the clips seen in Berg’s film, such as Joplin’s breakout performance at the Monterey Pop festival in 1967. But it doesn’t have Joplin’s performance at Woodstock; it was cut from the landmark documentary Woodstock because Joplin was clearly not in good form. But the family owned the original Woodstock footage, says Berg, and released it to her. Although that performance was not one of Joplin’s career highlights, it’s important for context, she says.

“She really cared about the performances she gave. That’s why Woodstock was highlighted in that way, because it was the one time that things got really out of control for her. [Joplin and her musicians] were there for 12 hours, everything was running late, and she was just partying,” says Berg. “Everyone was going there to recreate Monterey and then realized that wasn’t going to happen. Monterey was a one-time thing.”

But the heart of Janis: Little Girl Blue is Janis herself. We hear her voice — spoken by singer-songwriter Chan Marshall (better known as Cat Power) — through the many letters she wrote to her family back in Port Arthur, Texas in which she recounts, with disarming hope, humor and tenderness, events large and small in her life.

“The family showed me the letters and I was interested in using them from the beginning,” says Berg. “It offered a scary challenge in terms of bringing in another voice to the film, but Cat Power was the perfect person for the role. I stumbled upon an interview of hers at the recommendation of a friend of mine and when I heard her voice I was like, ‘this is it!’ It didn’t really come together until we were in the sound mix and I could hear everything at the proper levels and knew it was going to work.”

The film has many on-camera interviews with people who were pivotal in Joplin’s life, but the coup for Berg was David Niehaus, a former boyfriend that Joplin met while vacationing alone in Brazil.

“Her relationship with David Niehaus was very important for me. I had to find him. It took me so long to find him; he’s in Hawaii and had not really spoken about [Janis] to anyone before. He knew little of Janis’s legacy. He’s still in the past with the relationship he had with her. Even though they were only together for a short period of time, he represented the kind of  balance of strength and stability whilst still allowing her to be herself. The true tragedy is that she wasn’t mentally able to handle him at that time because of her drug problem.”

Clips of Joplin having fun with host Dick Cavett on his nighttime talk show may be familiar, but few interviewers have had the audacity to ask Cavett on camera if he and Joplin were lovers. Cavett dodges the question but, says Berg, “I’m pretty sure we know the answer.”

She admits to disappointment over the interviews she didn’t get. The danger for any historical documentary is the key people no longer alive to share information. One who is very much alive but who declined to be interviewed was Grace Slick, the lead singer of the Jefferson Airplane and one of the few women besides Joplin to headline rock concerts in the 1960s. “She didn’t want to be seen the way she is now,” says Beg. “That was an upsetting bit of information. There were numerous people such as Etta James who passed away over the period of time we were working on the film.”

But Berg has assembled many women in the rock world, from Pink to Melissa Etheridge, who acknowledge their debt to Joplin as a singer and as a pioneer. By sheer coincidence, Janis: Little Girl Blue is out the same year as Amy, the documentary about Amy Winehouse, another singular talent who died from substance abuse at age 27.

“If you look at how females in rock are remembered in history, they’re separate because they females,” says Berg, noting that other musicians who died from overdoses such as Jimi Hendrix and Jim Morrison, are thought of as artists first and casualties second. “I think Janis should be among the men. She is one of the best singers of all time; one of the best musicians and artists of all time,” says Berg. “I want to make sure people acknowledge that.”