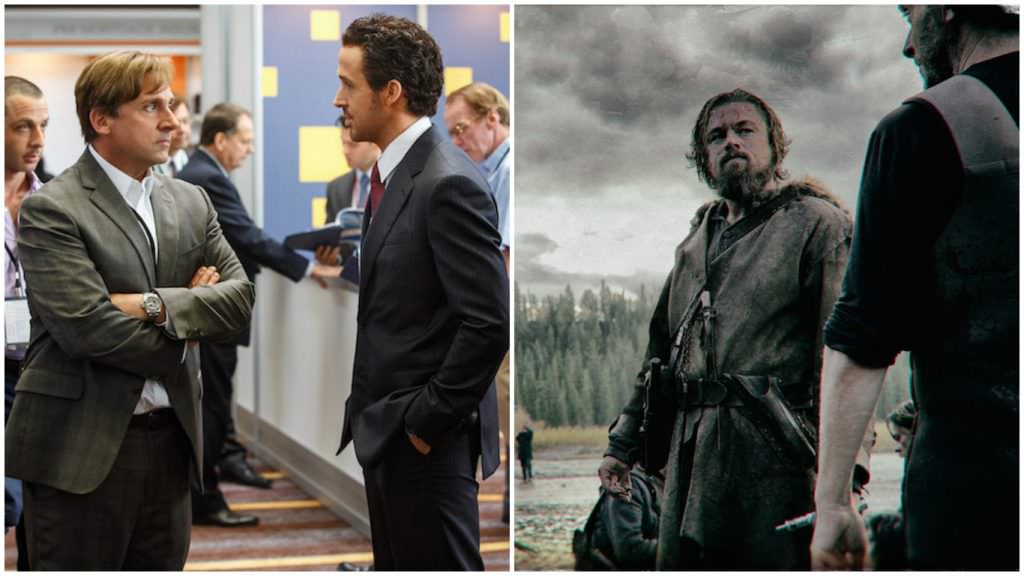 The Big Short & the Frenzy of Must-See Films in December

As the year comes to a close, there's a frenzy of films coming out in the next few weeks that are required viewing. I caught a screening last week of Alejandro González Iñárritu's The Revenant (we'll be discussing the film in more detail soon), a brutal, simultaneously gorgeous film that I haven't been able to totally shake since. In a way, the outrageous commitment the film required (you can read all about the production process here) reminded me of what it took for director Tom McCarthy and his co-writer Josh Singer to pull off Spotlight, arguably the best film ever made about journalism (yes, All The President's Men is incredible, too, but arguably an easier film to make considering the source material). The films couldn't be more different, and the demands they put on the cast and crew were night and day (quite literally, as much of The Revenant was shot using only natural light), but the level of commitment in telling these singular American stories was astonishing. What they share in spades is passion, and The Big Short, which comes out in select theaters on Friday and everywhere on December 23, looks to be another project from a filmmaker who just had to make this film.

The Revenant thrills you not only because it's a stunning piece of filmmaking, but because you practically shiver from the cold and wince from the pain that was so evidently a part of the process for cast and crew. Spotlight thrills you because you are getting the rare opportunity to watch a film about adults doing adult work, with no explosions, literal or plot-induced, yet one that slowly boils into one of the most haunting films in recent years. Iñárritu, his cinematographer Emmanuel Lubezki, and the entire cast and crew of The Revenant plunged themselves into the world of 19th century frontiersman so convincingly that the story of Hugh Glass (Leonardo DiCaprio), a fur trapper left for dead after a brutal grizzly attack (can there be any other kind?), becomes practically an existential viewing experience. By the film's final shot (a doozy, by the way), I felt a level of exhaustion, and awe, that can make going to the theater a dazzling, full body experience. I was practically holding myself throughout the movie as if to fight off chill, despite the theater being properly heated. Tom McCarthy and Josh Singer became something of journalists themselves when they set to work interviewing the Boston Globe reporters and many of their sources surrounding their expose on the Catholic Church's years-long coverup about nearly 90 priest's and their wanton abuses of children, uncovering aspects of the case that the Pulitzer Prize-winning jouranlists themselves had missed. When I caught that screening at the Middleburg Film Festival, former Globe editor-in-chief, Marty Baron, wonderfully played by Liev Schreiber, marveled at McCarthy and Singer's relentless pursuit of the full story. Both films are testaments to the passion and craft required for the very best filmmaking, a process that requires those involved to become near-experts in the world they're creating, or in these instances, re-creating.

Which brings me back (belaboredly!) to The Big Short, the passion project for writer/director Adam McKay, best known as the man behind some of our most beloved, insane comedies, from Anchorman to Step Brothers. McKay has been slyly slipping one of his major recent obsessions into his films, especially in the plot and the final credit sequence of The Other Guys (the 2009 buddy cop film starring Mark Wahlberg and McKay's muse, Will Ferrell)—the financial skullduggery that got us into the 2008 global financial meltdown. In The Other Guys, Wahlberg and Ferrell's detectives uncover a grand Ponzi scheme in which a Wall Street firm was bilking a police pension fund for billions, clearly not your typical screwball case for a buddy cop comedy. As McKay told Vulture's Jessica Pressler (in a great feature on the making of The Big Short); “I wanted it to be an allegory for the [financial] collapse, but as a comedy.” Presslser then notes that in order to bone up for this plot point, McKay spent time on the phone with the New York Times columnist and Nobel Prize winning economist Paul Krugman. The film's end credits are an ingenious animated inforgraphic detailing how Ponzi schemes work, the government TARP bailout for the "too big to fail" banks, the schemers on Wall Street who nearly tanked the global economy and paid no penalty, and more. It was a bizarre, brilliant coda to a film in which Wahlberg and Ferrell have a memorable argument about which animal would win in a fight, a lion or a tuna.

When McKay picked up Michael Lewis's "The Big Short," he found the source material he'd been looking for. It helped that Brad Pitt, via his Plan B entertainment, was on board to help convince studio heads and fellow stars alike to join (Pitt had already had success with another adaptation from a Michael Lewis book, "Moneyball"), but what's been evident in all the talk leading up to the film's release is McKay and co-writer Charles Randolph's script was brilliant, and that McKay was the right man at the right time to remind Americans what had happened leading up to the financial meltdown. The outrageous cast (Pitt, Steve Carell, Ryan Gosling, Marissa Tomei, Christian Bale, Melissa Leo) think they've got something speical here, and The Big Short could enter a increasingly crowded field for best picture contention.

TAGSSpotlight The Big Short The Revenant