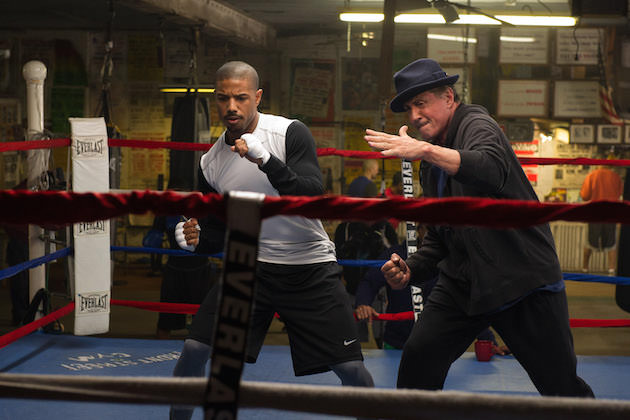 Rocky: From his Humble Beginnings to Creed

It’s been nearly forty years since Rocky Balboa faced his first opponent in the ring. Now after five sequels, three Oscar wins and an onscreen legacy that would be difficult to match, the former champion returns to the big screen as a trainer in the new drama Creed. The reviews have already started pouring in—the critics love this film. To appreciate what director Ryan Coogler and Creed star Michael B. Jordan have done here, you need first to go back to the very beginning, to the real life underdog story of how Sylvester Stallone created something epic and enduring out of nothing.

Over the years, Rocky has become an iconic hero whose story — according to Guinness World Records — was told in “the most successful sports movie franchise of all time.”

The franchise’s story began cinematically on November 21st  1976 when the drama Rocky — the fictional story of an underdog boxer who went on to fight the reining heavyweight boxing champion — premiered in New York City. Despite the odds facing a sports movie starring a then-unknown actor named Sylvester Stallone, the film went on to receive international financial success and ten Oscar nominations, ultimately taking home the awards for best picture, best director and best editing. That best picture nod went in a year that pitted Rocky against Network, All the President's Men and Taxi Driver—once again good old Rocky shocked the more polished contenders.

The film’s underdog story mirrors that of Stallone, the actor who has portrayed him onscreen since the beginning. Stallone was a struggling actor before the original film was made. According to the New York Times, a year before the movie was released, Stallone had “$106 in the bank. His wife was pregnant, his bull mastiff was starving and he couldn't pay the rent on his seedy Hollywood apartment.” For many struggling actors, the situation would call for a reassessment of priorities. For Stallone, it called for a pen and paper.

According to the Times, the actor wrote the movie’s screenplay in three and a half days and when he sold it to a studio, he insisted that he play the lead (''I told my wife that I'd rather bury it in the back yard and let the caterpillars play Rocky. I would have hated myself for selling out, the way we hate most people for selling out,” he told the Times.)

In the film, Stallone starred as the title character, a down on his luck boxer who is given a chance to fight against heavyweight champion Apollo Creed (Carl Weathers). With the support of his loving girlfriend Adrian (Talia Shire) and his intense trainer Mickey (Burgess Meredith), Rocky prepares for the highly-anticipated matchup. Although the fight (and the movie itself) ends with his loss to Apollo, Rocky’s ability to virtually match his opponent’s skills make him a champion as well.

Stallone was rewarded for his work on the film. In addition to making him a millionaire and an internationally-recognized actor, he personally received two Oscar nominations for the feature: one for his portrayal of the title character and one for his original screenplay.

Three years later, Stallone returned to the franchise in Rocky II. After fighting Creed in the original, Rocky has gained some fame but he’s still clamoring for the respect he truly deserves. Creed, who is still shocked by Rocky’s endurance in the ring, demands a rematch.  Ultimately, the two battle it out with Rocky finally coming out on top and becoming world champion. (To re-watch these movies, as in the scene below, you do note how little defense was involved in these boxing matches).

The next film in the franchise (appropriately entitled Rocky III) brings a young boxer named James Lang (Mr. T) to the scene. Lang challenges Rocky to fight. After losing an early match to Lang and watching as his beloved Mickey dies, Rocky trains with his former nemesis Apollo Creed and defeats Lang in the film’s closing moments.

Rocky’s story could’ve ended there. In fact, Stallone originally had only wanted to make a Rocky trilogy even saying in a 1979 interview with Roger Ebert that “there'll never be a 'Rocky IV.' You gotta call a halt.”

However, after the original trilogy, the series was still a major success so in 1985, Rocky IV was released in theaters nationwide. Instead of showing how tired audiences had become of the “Italian Stallion,” the film succeeded beyond any doubt. In fact, the film earned the most money of any Rocky film to date. In the midst of the Cold War, this sequel pitted Rocky against a Russian boxer named Ivan Drago (Dolph Lundgren). It also witnessed the death of Creed himself, who is killed in the ring battling Drago. After goading him into the ring, Drago ultimately faces off against Rocky — a match that ends when Rocky knocks him out.

Rocky 5 arrived in theaters five years later. In the film, Rocky is retired and helps train a new boxer named Tommy Gunn. Played by Tommy Morrison (a real life boxer who went on to win the heavyweight championship in the sport), Gunn eventually turns his back on Rocky. Unlike the previous three entries, the film doesn’t end with a battle in a boxing ring. It ends with a street fight between Rocky and his former protégé, a fight that Rocky ultimately wins.

Sixteen years after Rocky V, Sylvester Stallone returned to the character in the acclaimed drama Rocky Balboa. Long retired, Rocky has lost much of his earlier stamina and his beloved Adrian, who lost a battle with cancer years earlier. After a computer simulation reveals that Rocky — during his prime years — would be able to beat the current heavyweight champion, Rocky decides to go back into boxing. In a highly-publicized fight, the former champion faces off against the young and hungry Mason Dixon (played by former light heavyweight world champion Antonio Tarver). Although Rocky loses, he proves himself to all of the critics and the doubters who believed he would be easily knocked out of the ring.

Rocky proves himself as a great boxer once again, despite all of the odds against him.

Were it not for director Ryan Coogler, Rocky’s story might have ended then. However, Coogler — the director of the acclaimed drama Fruitvale Station — persuaded Stallone to pick up the gloves one more time for the spin-off film Creed. In an interview with EW.com, Coogler noted that he’d had the idea for the film for years. He stated “My dad was a real big Rocky fan…he was getting older and got sick and I was trying to process it. I tried to get through it with this idea for his hero.” The idea eventually intrigued Stallone.

The new film stars Michael B. Jordan as Apollo Creed’s son, a struggling boxer who asks Rocky to train him for an upcoming match. The film has been receiving rave reviews with Stallone himself being singled out once again for bringing the iconic Rocky Balboa back to the big screen.

Nearly forty years later, the character is still inspiring people inside and outside the ring. It's fitting, too, that the franchise has turned to an African American boxer (especially considering the sport has been dominated by African American and Latino boxers for decades) and an African American director, both major stars on the rise. Rocky's time in the spotlight fading in Rocky Balboa would have been an okay end, but to cede the spotlight to the younger Creed is the perfect coda for Stallone's tireless fighter and the legendary franchise he began.