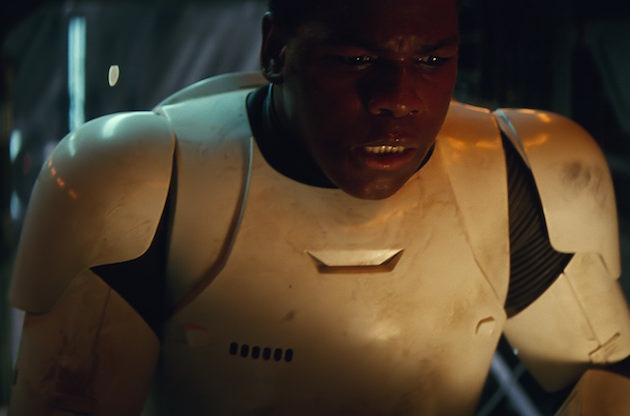 So obviously no one has any idea how many more Star Wars: The Force Awakens teasers there are going to be. We thought the "final trailer" that aired during the Monday Night Football game between the Eagles and the Giants was the last new footage we'd see, and then had to keep updating you with another unexpected teaser and new footage, our surprise increasingly feeling foolish. So while the latest teaser's existence isn't surprising in itself, the new footage it offers is excellent, and it offers a closer look at one of Force Awakens leads, John Boyega's Finn.

Take a look at the teaser below, and then we'll share a few of our thoughts about what we're seeing.

Finn's was the very first face we saw in the first trailer, and immediatley he was a source of mystery and excitement. One of our protagonists is a Stormtrooper? And what is he doing in the middle of the desert, without his helmet, looking very afraid? Since then we've gotten a bit more information, and have learned that Finn is indeed a rogue Stormtrooper who joins with Rey (Daisy Ridley) and droid BB-8 in an alliance against the First Order. We've already seen Finn face off in a light saber duel with Kylo Ren, so we know he's a good guy, and now we get to see our young hero in even sharper relief.

In this new teaser, Finn sounds a note somewhat similar to Rey's "I'm no one" comment—these are young people who are unsure about themselves—when he says "you don't know a thing about me, what I've seen…we all need to run."

The wow moments really start at 13 seconds in, when Finn faces off against a Stormtrooper (perhaps a former comrade?) with a light saber deflecting baton that's attached to his arm. Then at the 20 second mark, it's Finn and Han (with Chewy in the foreground), with Han asking Finn, "are you sure you're up for this?" and Finn responding, "hell no." This starts off a bunch of new footage, including BB-8 rolling upside down on the inside of a ship (the Millennium Falcon?) and Chewy's hand pressing down on the trigger of some kind of detonation device. A final shot of Finn at the helm of the Falcon's guns, shouting in excitement, rounds out this brief, exciting new look at one of the new stars of the Star Wars galaxy.