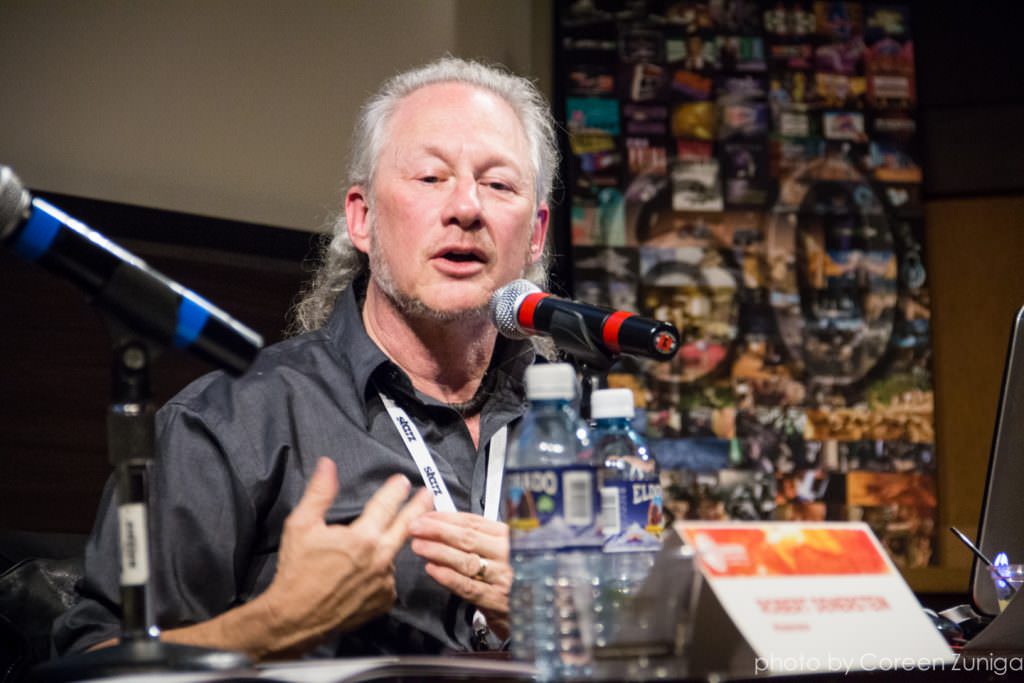 Ed Kramer is interested in “historically significant moments” for computer-generated imagery (CGI) in the movie industry. It’s no wonder this has become his passion, since as a computer graphics artist or supervisor he has been a part of many of them —from the seamless blend of real and computer generated water in The Perfect Storm to the dynamic cloth simulation of Jar Jar Binks.

Kramer worked at Lucasfilm's Industrial Light + Magic (ILM) for 12 years as Senior Technical Director. He first launched his career in CGI at a time when “there was nobody really doing this kind of stuff.” In 1980, he wrote his Master’s thesis at the University of Texas at Austin on using computers to create graphics, then packed up and went to Los Angeles where there were only four companies dabbling in computer graphics for movies. He arrived on a Friday and had a job by Monday, thanks to his timing at the cusp of a digital revolution in the movie business.

Kramer’s own legacy in Hollywood is his work on the teams that created software still regularly used in special effects.

“My job function was to create whatever technology needed to be created to make the scene work,” Kramer said at a Q&A hosted during the Denver Film Festival. “A particular movie’s need can prompt entire new technologies.”

Kramer developed a specialty in lighting on materials and generated surfaces. He worked on particle lighting system software for the carnivorous scarabs he supervised in The Mummy and The Mummy Returns. For the rock monster in Galaxy Quest, he helped create software to auto-generate the correct trajectory of debris in a collision. Jar Jar Binks required new software to make his ears and clothes wrinkle along with the character’s movements. Kramer also did some dimensionalizing for stereoscopic film (he objects to the term “3D movies” since “to me the term 3D just means what I’ve been doing my whole career: building objects in a computer.”) And the water technology he helped create for The Perfect Storm was the genesis of what he later used in Pirates of the Caribbean.

He calls The Perfect Storm the most challenging movie he’s ever worked on. Matching seamlessly in the same shot the real people filmed in a water tank in the foreground with the 200 foot ocean waves generated using CGI in the background is the hardest work of his career, Kramer said.

“There were more than 40 different techniques just for rendering foam,” he said. “Every shot in The Perfect Storm required it’s own research and development.”

Audiences are familiar with behind-the-scenes shots of actors working against a green screen and reacting to something that’s not really there. But the CGI artists filling in that green screen are working separately from the live action, as well. When working on a CGI sequence, “you don’t know how it’s going to cut into the rest of the movie and tell the story,” Kramer said. As an example, he pointed to Son of the Mask. The computer-generated gags were “really funny” when they stood alone, he said, but the rest of the movie “ended up kind of detracting from the computer graphics.” The opposite happened when he worked on Galaxy Quest, a movie where the CGI complimented good direction that brought the humor out of a script that wasn’t necessarily laugh-out-loud funny.

Kramer makes it his mission not only to mark milestones in the CGI industry but to credit the work of the men and women working in it. He’s working on a documentary and book titled “The Wizards of Hollywood” that focuses on “the people who actually did the work” behind the scenes for industry-changing movie moments.

“I want everybody to understand it’s always people doing this work,” he said. “These are not gods on a pedestal making these movies. That’s what I thought when I saw Jurassic Park. [But] it was just our job day to day.”

Kramer tells his students that, along with developing a technical skill set and an eye for making a computer image look real, working on CGI in the movie business requires a few fundamental things:

After working on 24 movies and even more memorable scenes  —  including working on a Jurassic Park sequel and creating the world’s first look at Quidditch in Harry Potter and the Chamber of Secrets  —   Kramer left Hollywood behind and moved to Denver, where he now teaches at the Colorado Film School. Denver doesn’t quite have a “thriving” film scene, he admitted, even though it is home to the nonprofit Denver Film Society,  which provides regular independent screenings, film education courses and the Filmmaker Focus program at the Sie FilmCenter and also produces the annual Denver Film Festival, which hosted Kramer’s Q&A. However, Kramer does credit Denver for its own milestone in computer graphics history, citing Lee Harrison III, who worked at the Denver Research Institute at the University of Denver and in the 1960s created ANIMAC, a system for animating 3D figures on an analog computer.

Now that he is spending more time with his wife and two kids, Kramer still goes to movies with an eye for CGI, but of all the movies that have come out since he left ILM, the one he most wishes he had worked on is Rango. Incredibly, he says it’s his “favorite CGI movie of all time."