Star Wars fan Daniel Fleetwood's wife began a campaign on his behalf to see The Force Awakens early, and the plea quickly went viral. Fleetwood has a rare form of cancer called spindle-cell sarcoma, and he was worried he wouldn't live to see the December 18 release. His wife Ashley sprung into action with this Tweet:

#forcefordaniel help my man get his last wish, to see a screening of Star Wars before cancer takes him. @bad_robotpic.twitter.com/XCuYD0KlpY

The tweet quickly became viral, and Force Awakens stars John Boyega, Daisy Ridley, Carrie Fisher, Mark Hamill, and Peter Mayhew (Chewbacca) joined the cause, retweeting or Instagramming Ashley's call to let Fleetwood see an early screening. The power of the #ForceForDaniel campaign made it's way to the very top, and Disney, J.J. Abrams' production company Bad Robot and Lucasfilm arranged for Daniel to see the film. 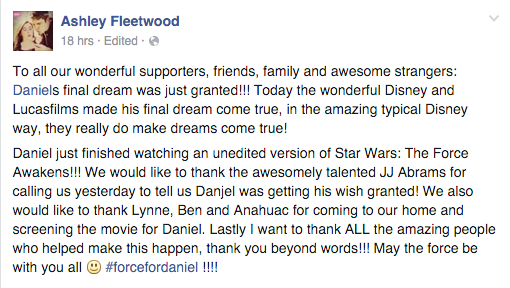 You can lend your support to Daniel here. May the Force be with you.