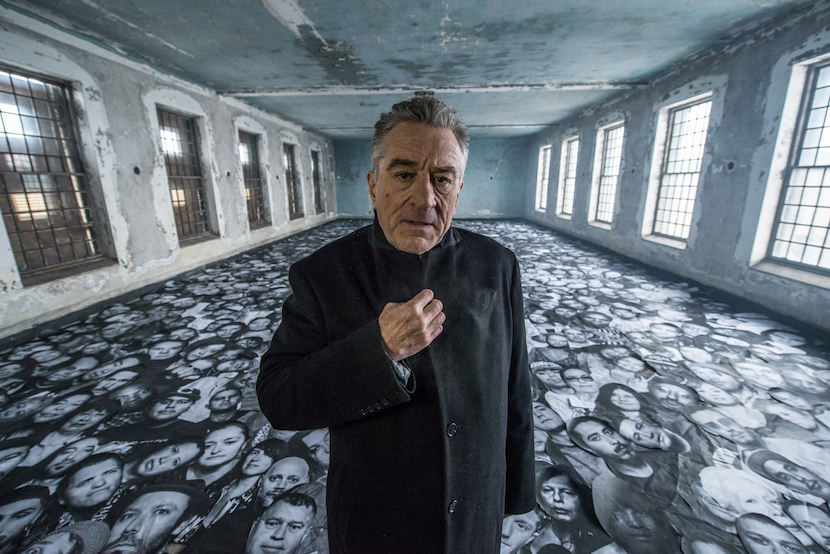 A Conversation with Director & Artist JR About his Film ELLIS

Last night installation artist JR's short film about immigration – Ellis, starring Robert De Niro and written by Academy Award winning screenwriter Eric Roth, premiered in New York.  We had a chance to chat with JR about his film, his inspiration and more.

For those unacquainted with him, JR is a pseudonym for an artist and photographer who has made the choice to remain anonymous. His gallery is the streets of the world and his audience are those who are not the typical museum visitor. He works without regard to whether his exhibits are legal, displaying his images in unconventional spaces. His 2006 “Portrait of a Generation” displayed suburban “thugs” in the bourgeois districts of Paris. With Marco, he created the biggest illegal exhibition ever where he posted huge portraits of Israelis and Palestinians, face to face, in eight Palestinian and Israeli cities. His film Women Are Heroes was presented at the 2010 Cannes in competition for the Camera d'Or. In 2011, JR received the Ted Prize which funded his "A wish to change the world". JR is well known for his “Inside Out” international participatory art project. Inside Out allows people worldwide to get their picture taken and have it pasted in support of an idea, a project, an action and share experience in unexpected places from bridges in Africa to favelas in Brazil and slums in Paris. For more on JR visit here.

ELLIS, which JR directs, is a narrative short film that serves to “awakens our collective memory.” It stars Academy Award Winner Robert De Niro and is written Academy Award Winner Eric Roth (Forrest Gump). Through its brief 14-minutes, it tells the story of the ghost of a man who wished to escape poverty and persecution but never made it past Ellis Island. It quietly questions our values, as the successful descendants of earlier immigrants, about those currently seeking the same opportunities and safety in this country and other parts of the world.

The film is cinematically gorgeous (thanks in large part to the work fo cinematographer Andre Chemetoff), with a haunting score by WOODKID and performed by Niles Frahm. JR’s “Unframed” art installations in the abandoned Ellis Island Hospital complex serve as the set for this thought provoking and timely film.

This week, ELLIS screening installations will be happening across the country, through word of mouth events and building projections, presented in intimate and public screenings. If you would like to screen ELLIS in your community press HERE. 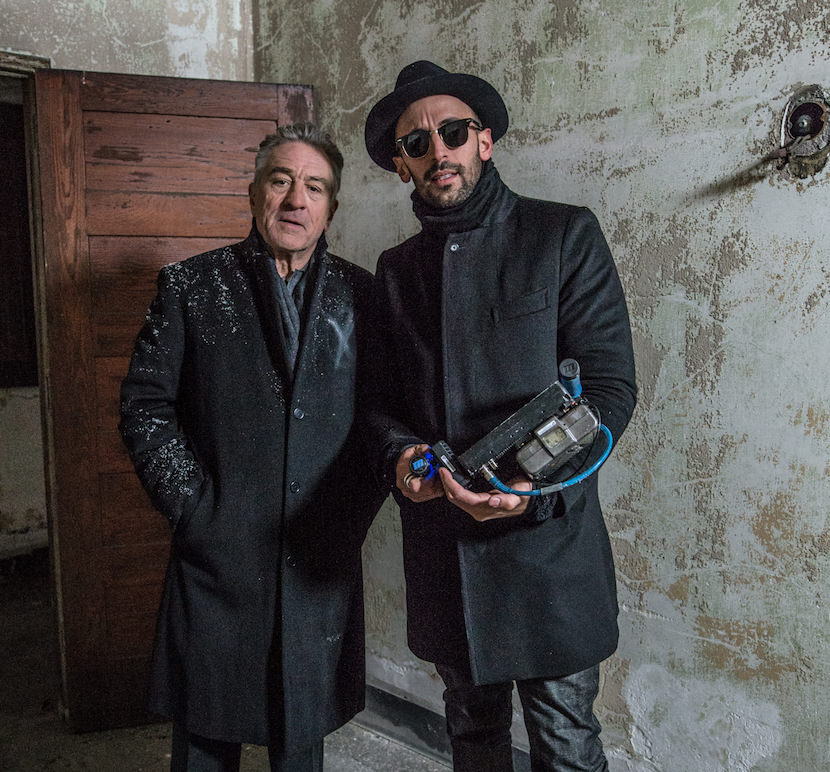 I guess the main drive was to talk about immigration, but through history, and to connect it to the present. The only way I felt I could do it was literally through Ellis Island. The big challenge was that section of Ellis Island had never been seen before. That side of the Island had been abandoned for more than 80 years now. I was documenting something that will never be documented again and has never been before, which is pretty rare. 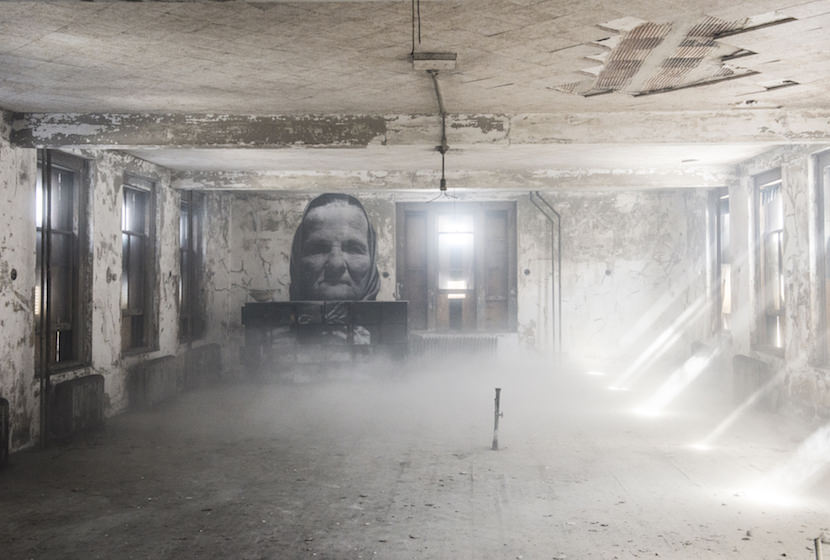 A still from the movie

I have been to Ellis Island on a number of occasions and have always found it to be a powerful reminder of our collective immigrant past, whether our families passed through these gates or others. On a tour I learned about the people who were turned back, many for medical reasons. What made you focus on that part of the immigration experience?

I guess because you would come from the other side of the planet and leave everything behind you. You would arrive somewhere and you are so close to your goal – 100 meters of water between you and the big city, your dream—and you could not make it, you had to go back. I feel that today it is “medical” what is happening today around the world. Especially as we live in one of the biggest crises of immigration since the Second World War in Europe. In America it is a nonstop issue. It is a real question to ask ourselves; what it takes and what it means to leave everything behind.

It is definitely a parallel to what is going on now – a person arrives, but what happens next? 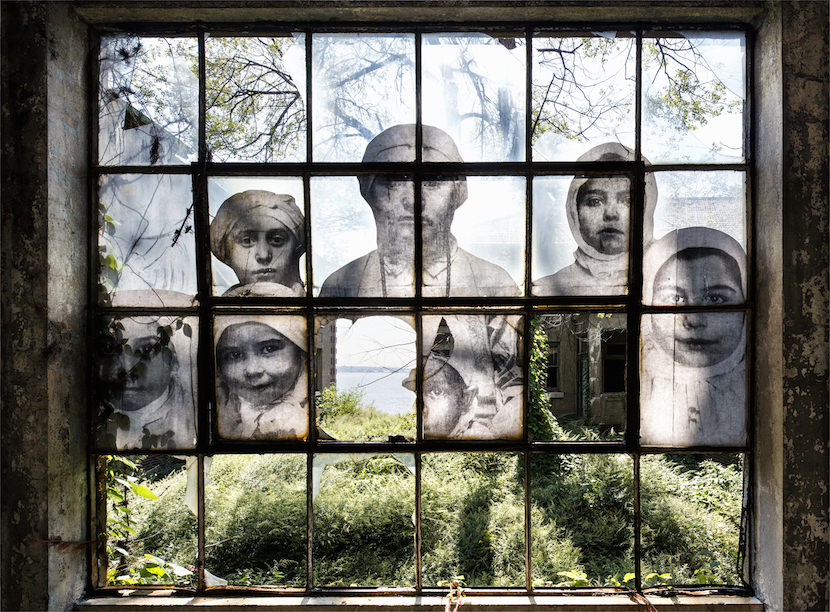 When you were deciding about the story, why specifically Ellis Island and why that part of the Island? Visitors go on tours and get to see the history that they want to share with you every day, but it I think it's fascinating that you were able to share a part of the Island that hasn’t been seen for 80 years.

The part of the Island had been used until 1938 and then it was turned into a jail until the 50’s. A place like that, at least personally to me, talks much more than a museum because the whole space around you feels like the present. It feels like the struggle of the people, the hope and the fear. It was called the “Island of Hope” or “Island of Tears” and you get that when you walk through those walls. There is almost nothing left, just chairs and benches and beds. What you see in the film actually is exactly how it is. You can care so much more than if you just read stories because it transpired through those walls. It’s just the layers of paint that have faded; through all the years you can tell a lot of what happened there. 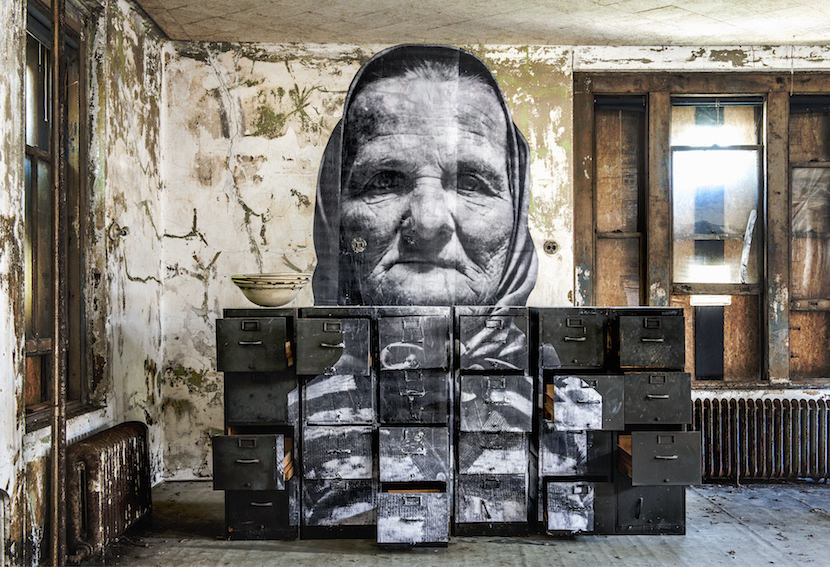 I was touched by the sparse use of immigrant photos. It made the film seem much more of a personal experience. Was that your intent?

Yeah, they are still there today. It is pretty interesting because you walk through those rooms and it is like ghosts on walls. For me, it was a way to connect to the ghosts in the story. They were pasted months and months before we actually shot. That is why they are fading inside the walls; that is why the rust is taking over. You can see today that it is swallowing into the walls.

How did you choose the photos? What the intent behind those specific images?

They were added way before; even before we started working on the film. They were there for our project and then I connected both. 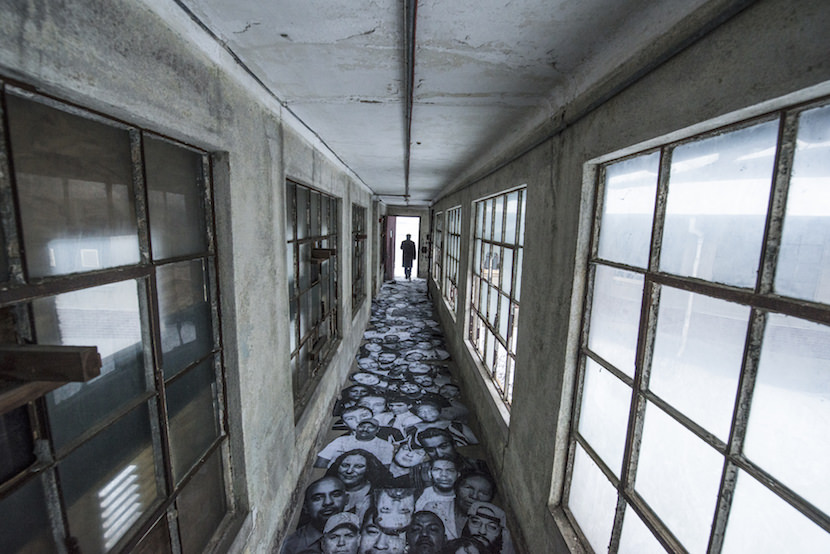 Ellis – corridor, still from the movie.

The densely photo populated corridor was a strong reminder that from the few came many, their descendants. You are so careful in your selections for your installations. Who are these people? Are they the descendants of those who successfully passed through the gates of Ellis Island?

Those were photos that for one year we went all around (this country) with a photo-booth truck and gathered up groups’ people who wanted to fight for their rights because they are immigrants relocated in the U.S. They came to the truck either in support of immigrants or because they were without papers in the U.S. We gathered all those thousands of photos and it really connected to the reality of today. 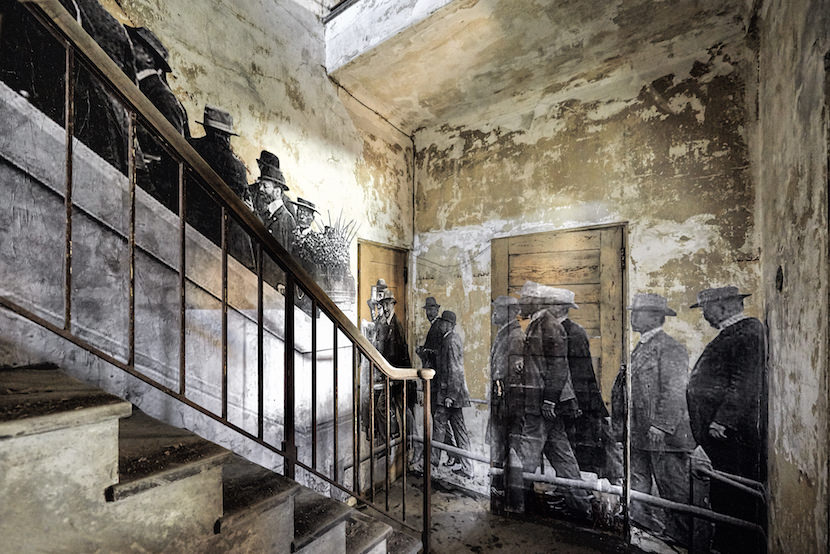 What would you like people to take away from the film?

It is to remind us of the simple fact that despite what we see through the media and what we hear about the problems of immigration, it is people. It is people and their stories. We humanize, give the context – that is what this film is trying to do. Understanding the past is a great way to understand our present and future.

How did you connect with Robert De Niro and Eric Roth?

I met Robert De Niro when I moved to New York years ago and a friend introduced us. She (the friend) sort of originated this project when she gave me a book about Ellis Island; it gave me the idea to do something there. It took years, but it has been something that stayed in my mind since I moved to New York. I have been working with Robert De Niro since on different projects, art projects. One day I asked him and I told him what I was doing on Ellis Island. He told me he would do it if I found a proper writer. He said he loved Eric Roth. When I contact him (Roth), he told me that he actually had family that came through Ellis Island and he would be more than happy to work on this project. He went to Ellis Island by himself and started writing the story.

So, it almost became personal for Roth?

Yes, he connected with his roots. I even had family that came through Ellis Island. Twelve million people came through it. We talked a lot about different stories that we were hearing in the media. We also discussed how to connect the past and the present.

Your process for having the film serve as a screening installation and getting it out to a wide audience is very modern but also very old fashioned with public projections and relying on word of mouth. Why did you choose this as your method of distribution? What do you predict to be the size of its audience?

In all my projects, I try and make sure people really interact with them. When I started this project, I knew that I didn’t want it to be tied with any productions so I could really release it the way I want. We tried to make it as accessible as possible. Really anyone can organize – at schools, at home, for friends, at universities, anywhere basically. I am trying to hold it back as much as possible from the online experience because I think there is something so much stronger in getting together. There is so much online that you can watch from your phone or when you a on a train ride, but I think you remember so much more the stuff that you go and see, that you HAVE to make an effort to go and see. You meet some people you actually start a discussion with and that rarely happens when you are just watching on your phone.

I am really hoping that people take it to places where it makes more sense to them. I am hoping that people will have this in places and in contexts that will have an impact. Sometimes it is just about changing the conversation that we have about the subject. I think one screening at a time we will get there.

Is there one place in particular that you hope to take this film?

For me – sharing the film is just the process of creating interaction between people and gathering people together. Then discussion will happen around it. We are screening it in hundreds of universities in November, and that is where the magic will happen. Maybe, a whole new adventure will start. That is the fun; I never know when I start a project where it will actually take me.