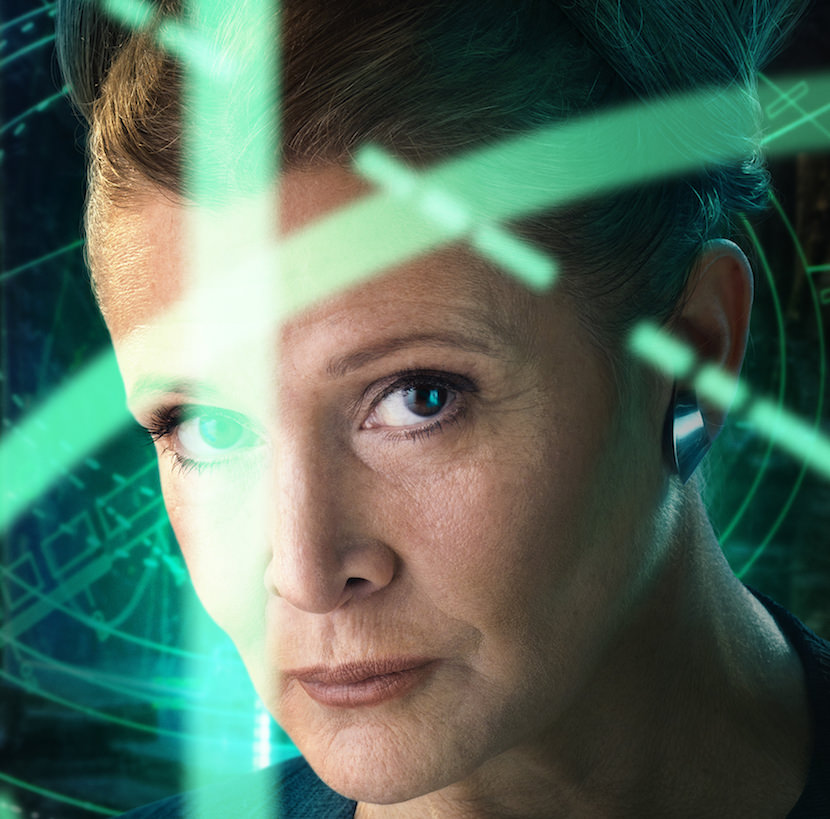 Entertainment Weekly’s big Star Wars: The Force Awakens feature, with four separate covers, includes this tiny but not insignificant detail—in the film, Princess Leia is now General Leia. Director J.J. Abrams told EW this: “She’s referred to as General, But … there’s a moment in the movie where a character sort of slips and calls her ‘Princess.’”

Ever wondered why she was referred to as a Princess in the first place? Slashfilm helpfully lays it out: From the movies (i.e. canon) who know that Leia was adopted by Bail Organa, who served as the First Chairman and Viceroy of Alderaan, and served in the Galactic Senate as the Senator of the Alderaan. Bail Organa was married to Queen Breha of Alderaan, which is how Leia became the Princess of Alderaan. Of course, Alderaan was destroyed in a demonstration of the Death Star during Star Wars: A New Hope, and thus it makes sense that Leia is no longer a Princess — the world no longer exists and hasn’t for almost four decades at this point in the timeline.

In more The Force Awakens news, The Wrap reports that Disney will not rush to enter the film into National Board of Review competition, or screen it for critics groups, to keep the film’s secrets secret. The National Board of Review releases it’s top ten best film list on December 1, the official start of Hollywood’s awards season. This isn’t the only competition The Force Awakens will skip, according to The Wrap; it will also sit out the New York Film Critics Circle Awards on December 2, the Los Angeles Film Critics Association honors on December 6,and the Screen Actor Guild Awards on December 9. It seems as if Disney and Lucasfilm have decided that more important than recognition from critics and their peers is keeping the details of the plot absolutely airtight for audiences until the December 18 release.

Did you love Mad Max: Fury Road?  Yeah, us too. So join Variety and sit down with director George Miller to hear about the epic production process of the film. Miller says that the fact that the film fell apart two times before they finally got to shoot it, it gave the filmmakers a chance to dig deeper into the story and for the technology to catch up to his vision. And about Charlize Theron’s Furiosa? “She was the only person I ever thought of in the role.” Good thinking, George.

The Hollywood Reporter gathered six top producers for a round table to discuss what it takes to make a film these days. Stacey Sher, producer on Quentin Tarantino’s The Hateful Eight, would give this advice to her younger self:

Not [to] be so timid. I know that doesn't really seem to resonate with my personality. (Laughs.) But one of the things — particularly being a woman — you tend to defer a lot. And to deflect, like, "Don't worry about me. I'm just over here working. Doing my job." I worried too much about how you're perceived as being a good girl or a good worker. A lot of the women in Hollywood at that time practiced what Gloria Steinem would have called the "queen bee syndrome"; there were only a limited number of people at the table, and they weren't really helpful. It's really changed. It's not as scary.

And here’s Ice Cube on the difficulty of making Straight Outta Compton:

“It was the hardest movie. And I've been producing movies since 1995 [Friday]. Not just because of so many dynamic personalities — so many different stories, so many different legal problems. Outside threats. Seeing it about to fall apart at many different times. That was our biggest thing, using all of our powers to keep it together because it just wanted to unravel in so many different areas.”