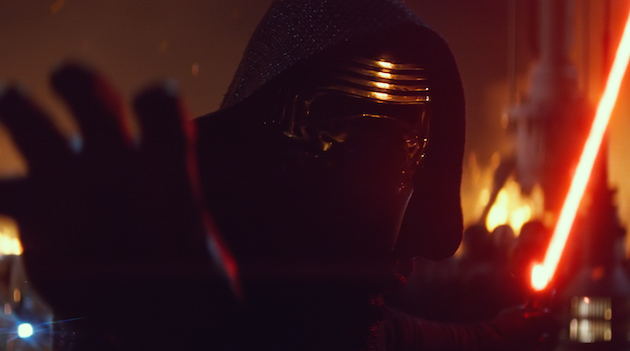 Now that we’ve had nearly 12 hours to digest the 2:36 worth of new footage in the final Star Wars: The Force Awakens trailer, we can start to put some of the pieces together.

First, the trailer again, so you can go through it with us point-by-speculative-point:

The events of the original Star Wars trilogy (let alone the prequels) seem to have faded into myth. Our new heroes, specifically Rey (Daisy Ridley) and Finn (John Boyega) seem totally unaware that the events from the original trilogy were real. This is a significant plot point, as it suggests, along with the title of the new film, that both the Jedi and the Dark Side have been in hiding, regrouping, or simply not as prevalent as they were during the years the trilogy spanned. “It’s all true—all of it,” Han Solo (Harrison Ford) assures Rey. Clearly Rey, Finn and Poe Dameron (Oscar Isaac) will come to believe Han once Kylo Ren (Adam Driver), Captain Phasma (Gwendoline Christie) and an army of Stormtroopers begin destroying things.

Our new heroes will be as reluctant as our old heroes. Neither Luke Skywalker or Han Solo believed they were heroes when we met them in the very first Star Wars, and it sounds as if the same will hold true for Rey and Finn (perhaps Dameron, who is an X-wing fighter pilot, is a little less doubtful of his self worth). Rey responds to the question “Who are you?” in the trailer (we believe that’s Princess Leia talking to her, possibly her mother) with “I’m no one.” Finn describes himself as someone “raised to do one thing” but now “I’ve got nothing to fight for.” These are the feelings of isolation, confusion and doubt that Luke experienced after his and aunt and uncle were killed by the Empire and he was taken under Obi-Wan Kenobe’s wing. Han Solo repeatedly assured Luke, Obi-wan and Leia that he was nothing more than a (very good) smuggler.

The Theory Regarding Kylo Ren’s Obsession with Darth Vader was right. “Nothing will stand in our way. I will finish what you started” Ren says to Vader’s melted mask. What’s more, actor Adam Driver’s force is heavily modulated by a breathing apparatus that sounds, well, Vader-like.

The opening shot of Rey in a mask and goggles appears very DIY. It doesn’t appear Rey comes from a lot of money. At 9 seconds in our very first new image is of Rey in a very handmade looking ensemble. Check out her mask, the cover she wears over her face and the loose sticking on her left shoulder—she almost looks like a scavenger. We know it’s Rey by the staff she wears harnessed across her back, and by the fact that she's our protagonist and by rights would likely get to star in the first image of the final trailer

Where’s Luke? While Carrie Fisher’s Leia shows up at the very end, hugging Han (and again, we believe she is the female voice asking Rey “who are you” in the beginning and telling her “The Force, it’s calling to you—just let it in” at the end) there’s no Luke (Mark Hamill) at all, as there is no Luke in the new poster. Only we’re not so sure about this—we’ll explain below in the breakout of new images.

There were a ton of new images in this final trailer. Including the very opening shot of Rey in her goggles repelling down the interior of a base or a starship. In fact, Collider counted 50 new images. Here are a few that made us very curious:

0:25: What is that craft climbing into the sky? It’s not an X-wing or a TIE fighter.

0:43: We see the crucial moment when Finn’s TIE fighter is shot out of the sky, landing him on Jakku, where he probably meets Rey.

0:50: A phalanx of First Order officers on the deck of a massive ship, which believe is one of the First Order's new Finalizers, with Kylo Ren in the center making his promise to Darth Vader’s melted helmet.

1:03: This might be one of the biggest reveals in the trailer—a captured Poe Dameron in the hands of Kylo Ren, who, speaking of hands, lowers his towards Dameron’s face. Dameron starts screaming, which cuts immediately to the image of a forest in flames, perhaps an entire planet being obliterated.

1:10: Two TIE fighters chase the Millennium Falcon, and this is the moment we hear Rey’s voice say “There were stories about what happened,” leading to Han Solo’s reply, “It’s true, all of it.”

1:24: Probably the "coolest" image in the trailer—Kylo Ren and some of his troops in a pouring rain, lit only by Ren’s lightsaber.

1:26: X-Wing fighters flying very low over a body of water to Solo’s continuing voiceover…the fighters are flying right out a ruin where Stormtroopers prepare to fight back.

1:39: There’s been speculation that this shot, with the huge droid who appears to be guarding a structure with tattered banners that Solo, BB-8, Rey and Finn are entering is a Jedi temple.

1:40: That has to be Luke, right? A metal hand, the very hand Luke lost to Darth Vader's lightsaber, touching his beloved R2D2. The internet's been abuzz last night and this morning about Luke's absence from the trailer, but this brief shot has to be him. Also, it's probably not for nothing that this moment appears right as Han Solo finishes his explanation to Rey by saying “They’re real.”

1:44: Kylo Ren using his crossguard-equipped lightsaber to do serious damage to someone—this image is as good at any at getting to the psychology of Ren, who appears to be a very, very angry young man.

1:47: Chewbacca and Han with their hands over their heads, as if they’ve been captured, but then they start to lower them…

1:58: In the climatic final shot of the trailer, Finn unleashes his blue lightsaber as Kylo Ren, now maskless, fires up his lightsaber as they two square off in a snowy forest. Then it's Leia's voice, telling Rey…“The force, it’s calling to you—just let it in.”