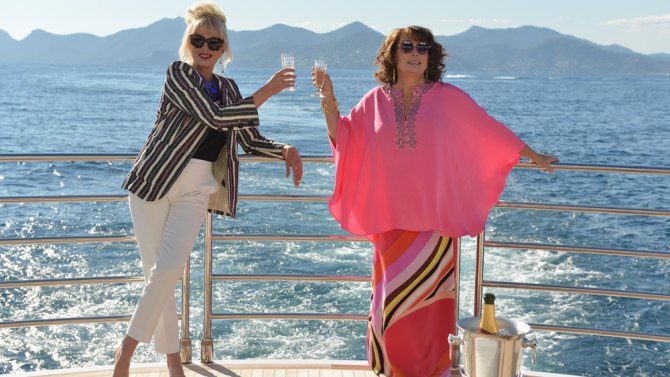 The Girls Are Back: Filming Starts for Ab Fab: The Movie

Our favorite British television duo is back and about to flourish on a screen almost as big as they are – yup, you guessed it – Fox Searchlight and BBC Films have begun filming a movie version of the hit sitcom – Absolutely Fabulous. For six seasons we loved watching the fumbling fashionista Edina Monsoon (Jennifer Saunders) and her best friend and sidekick, the alcohol plied former model Patsy Stone (Joanna Lumley) muddle through their Ab Fab life accompanied by a wickedly funny cast of characters.

In our first look, the two best friends are doing exactly what we expect of them—hanging out on a yacht, soaking up the sun, enjoyed a glass of champagne and well… looking absolutely fabulous.

The studios’ plot description is, “Appropriate for their big screen debut, Edina and Patsy are still oozing glitz and glamour, living the high life they are accustomed to; shopping, drinking and clubbing their way around London’s trendiest hotspots. Blamed for a major incident at an uber fashionable launch party, they become entangled in a media storm and are relentlessly pursued by the paparazzi. Fleeing penniless to the glamorous playground of the super-rich, the French Riviera, they hatch a plan to make their escape permanent and live the high life forever more!”

It appears the gang is all here for this film reunion. Of course Jennifer Saunders and Joanna Lumley will be reprising their roles as Edina and Patsy. Julia Sawalha is returning as Edina’s frumpy, self-righteous daughter as Saffy. Jane Horrocks is back as Edina’s bumbling assistant Bubble with June Whitfield as her forgetfully wise Mother.

With filming taking place in Britain and the south of France, we are expecting big laughs in 2016.