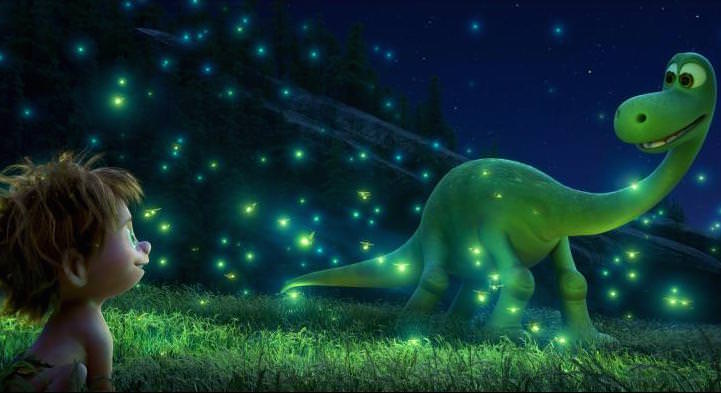 The underlying conceit in The Good Dinosaur is that the asteroid that struck the earth and killed the dinosaurs missed, meaning dinosaurs and humans would walk the earth together. When the young Aapotosaurs Arlo (voiced by Raymond Ochoa) is separated from his father by a wicked storm, he’s united with a young human named Spot (voiced by Jack Bright), who quickly becomes his best friend. This much we already knew, but in the new trailer Pixar just released, first time director Peter Sohm’s protagonist Arlo shows us a range of emotions from fear to joy.

As Sohm told Entertainment Weekly this fall, Arlo’s emotions were central to creating the look and feel of the film’s lush landscapes. “Nature itself becoming a character was a big deal. Everything that we want to throw at Arlo, we can do externally but also internally as well. And what I mean by that is when a storm hits, it can affect Arlo in a real external way, but we also tried to find ways that it can affect him emotionally. His big issue is that he’s afraid of everything, and he isn’t capable. When he’s in front of these natural backgrounds, it’s important that he feels outside of that.”