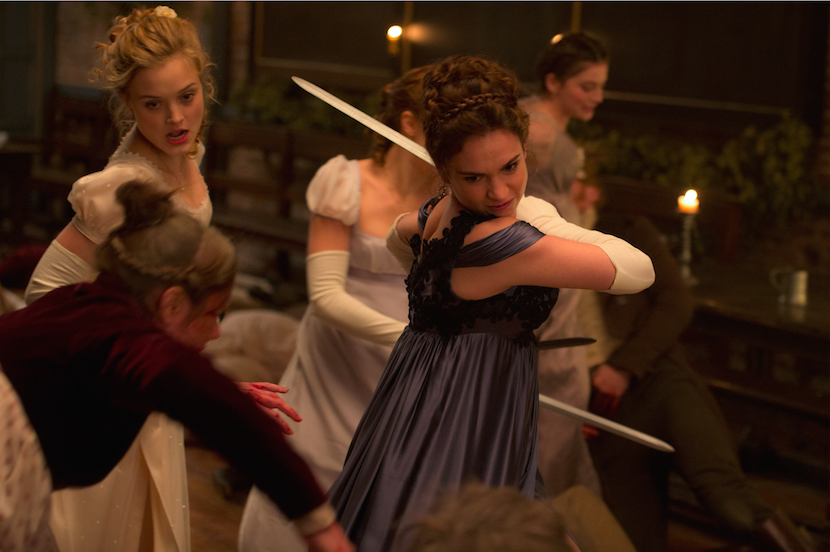 Opening with a tinkling piano and images of England’s landed gentry doing their thing (horseback riding, chastely dancing, etc.), Pride and Prejudice and Zombies appears perfectly pleasant, as if the title didn't include the last conjunction and noun and what you were actually watching was the opening title sequence to Downton Abbey. But the final conjunction and noun are the film's reason for existing, as this is mashup of Jane Austen’s beloved novel with horror’s hottest villains (sorry, vampires, it’s the zombie’s turn to shine, er, eat), based on Seth Grahame-Smith's novel, will soak all those Regency-era niceties in blood and gore.

“To succeed in polite society, a young woman must be many things,” says Elizabeth Bennet (Lily James). “Kind, well read, and accomplished. But to survive in the world as we know it, she’ll need…other qualities.” At which point they cut the piano and turn up the glam rock as our heroines slaughter the undead like a bunch of English Michonnes (for you The Walking Dead fans out there).

Along with James as the heroine Elizabeth, you’ve got Bella Heathcote as Jane Bennet, Suki Waterhouse as Kitty Bennet and Sam Riley as Mr. Darcy. Pride and Prejudice and Zombies is directed by Burr Steers, and is due out on February 5.

TAGSFront of Book Lionsgate Pride and Prejudice and Zombies Trailer