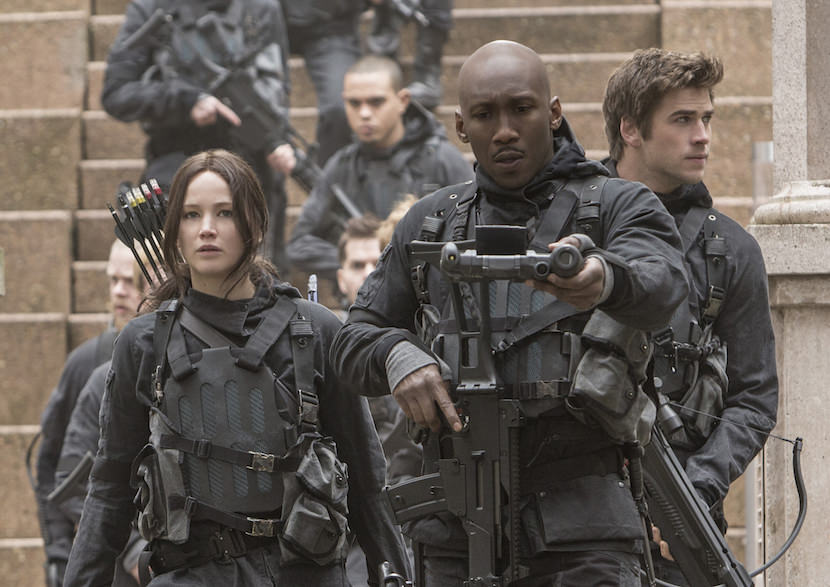 When this new The Hunger Games: Mockingjay – Part 2 clip, Katniss (Jennifer Lawrence) is reunited with friend Finnick (Sam Claflin) as her squad, 451, assembles under the command of Boggs (Mahershala Ali) and his second in command, Lt. Jackson (Michelle Forbes). What Katniss discovers in this moment is that her mission, along with friends Gale (Liam Hemsworth) and Peeta (Josh Hutcherson) are in the “Star Squad”—meaning, they will not be fighting on the front lines (despite their unique skill sets), but rather will be held back, their faces on the TV coverage of the raid on the Capitol to keep the masses confident and engaged. “You’re going to be the on screen faces of the invasion,” Cressida (Natalie Dormer) tells them.

Although well behind the frontline, Boggs tells his unit that they’ll likely encounter many “pods” along the way—President Snow’s trigger points that can unleash anything on Katniss and the team, from explosions to “mutts” (those insane dogs).

“Whatever they contain, they are meant to kill you,” Boggs tells them.

Will Katniss, Gale and the rest stay behind the front lines? Will President Snow not do everything in his power to make sure Katniss is front and center when the worst of what he’s got planned is unleashed? I think we all know the answers to these questions.