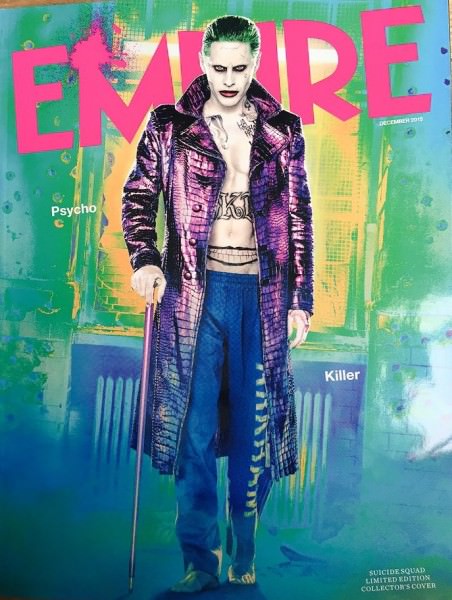 Empire Magazine's upcoming story on Suicide Squad comes complete with photos from the set, and, this colorful cover image of the craziest super villain of them all, the Joker (Jared Leto).

What you probably already know is that Suicide Squad follows a host of bad guys following their conditional release from their various maximum security dungeon-cells so they can join forces and track down an even badder guy. It's directed by David Ayer (Fury, End of Watch, Training Day), a man who does muscular and thrilling better than most.

The film's cast is large and worth no short amount of excitement. Will Smith is Deadshot, Margot Robbie (The Wolf of Wall Street) is Harley Quinn, Joel Kinnaman (RoboCop, Easy Money) is Rick Flagg, Jai Courtney (Divergent, The Water Diviner) as Captain Boomerang, Cara Delevingne (Anna Karenina, upcoming Pan) is Enchantress, Karen Fukuhara is Katana, Adewale Akinnuoye-Agbaje is Killer Croc, Jay Hernandez is El DIablo, Adam Beach is Slipknot, and Viola Davis is their boss, Amanda Waller, the woman who sprung them from prison to execute Black Ops missions for the government.

Empire's access to the set, and to the heretofore fairly hidden Leto in his turn as the Joker, will yield some great photos. We'll share the new images when Warner Bros. releases them officially. For now, check out ScreenSlam's look at the Empire story.