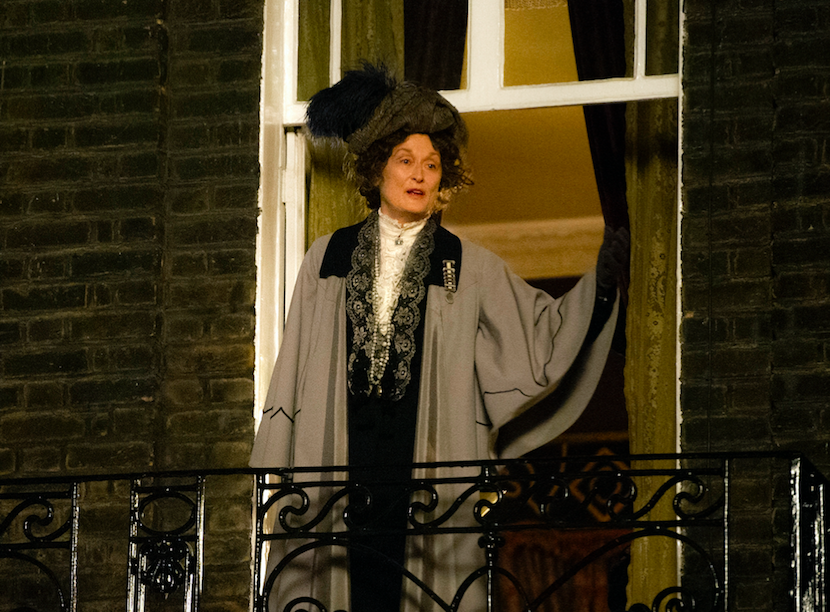 Suffragette, which portrays the more violent side of Great Britain’s women’s fight for the vote during the late 19th century and early 20th, stars Carey Mulligan as a beleagured young worker who becomes entrenched in the front lines of the suffrage movement. Leading Mulligan’s character and her fictional cohort is Emmeline Pankhurst, a pivotal and very real suffragette and political activist who died in 1928, living to see her mission accomplished plus ten years. To play the role of a woman whom Time named one of its most important people of the 20 century in 1999, director Sarah Gavron tapped Meryl Streep. As the unwritten best living actress of our time, Streep revisits a dramatic niche in which she seems to have a monopoly, that of the distinctly accented, highly distinguished matriarch.

With Suffragette already earning critical accolades and gaining award-season momentum, let’s take a look back at some of the other baller women to whom Streep’s acting has done justice — we happen to like her nonfiction portrayals best; the Academy seems to enjoy almost all of them. Slate even put together this great mash-up of the many voices of Meryl Streep back in 2009 that's worth a watch.

Out of Africa, (1985) — Streep plays the lead role of Karen Blixen, in real life better known by her penname, Isak Dinesen, the name she used to publish the autobiography on which this film was later based. Accomplishments from Blixen that Streep portrays include but aren’t limited to: farming coffee, on her own, at high altitudes in Africa, founding a school to educate the chidren of local tribes who work Blixen’s land (in the face of blatant racism from her fellow white immigrants), running a supply line to soldiers on the African front lines of WWI, kicking an unfaithful husband to the curb. Streep was nominated for a Best Lead Actress Oscar, but lost to Sally Field. Accent: aristocratic Danish, modeled after Blixen’s own.

Lemony Snicket’s A Series of Unfortunate Events (2004) — Josephine, the kindly if unreasonably paranoid elderly aunt to the three orphan children at the crux of the film’s action, has more than a few fears, though does the best she can by her unlucky nieces and nephew. Who isn’t sometimes scared of the doorknobs shattering into a million tiny pieces, one of which might hit an eye? As a Victorian-styled dowager bustling through her dusty home, Streep makes some of this obsessive-compulsive disorder look rational, or at least appealing, garnering her another Supporting Actress Oscar nod. Accent: Another-era American, Grace Kelly at the height of her Hollywood fame. Listen at the 1:30 mark below.

A Prairie Home Companion (2006) — Streep won Best Supporting Actress for her role as Lindsay Lohan’s mother…or rather, as Yolanda Johnson, one half of a midwestern singing sister act, with Lily Tomlin, pitching in to keep a fictional Minnesotan radio program alive (and to bring a reluctant daughter, played by LiLo, on board) in Robert Altman’s last film. Accent: smooth, flat Midwestern.

Julie and Julia (2009) — Watch out Amy Adams, there’s a full lunar eclipse ahead and it’s never ending. Streep plays Julia Child, the grand dame of French cooking in America, from her early years in France through the publication of her first cookbook (Adams plays an annoying blogger). Streep was nominated for a Supporting Actress Oscar, though we’d argue she’s the real star of the film — and if you happen to google a supercut of Julia Child scenes only, you will find what you seek. Accent: That’s a good question. Try eloquent New England brahmin with a heaping tablespoon of the Continent stirred in, for good measure.

The Iron Lady (2011) — Streep won a Best Actress Oscar for her portrayal of Margaret Thatcher, Britain’s Prime Minister from 1979 to 1990. We won’t apply the word “accomplishments” here, as Thatcher’s policies are still a loaded topic to Brits under her authority…and even to those born after it. But as a woman leading first a political party and then a country in an era when most mothers still stayed at home, no matter how mad her public still is about deregulation, Thatcher was in a league of her own. Which makes Streep, in her own class in her field, an obvious choice to play her. Accent: high octane power British.

August: Osage County (2013) — As dysfunctional, cursing, valium-popping matriarch Violet Weston, Streep takes a dark turn as the head of an Oklahoma clan dealing with more than its fair share of troubles, starting with a missing husband (he’s located pretty quickly, but bigger problems linger under the surface). While this role certainly sees Streep play yet another top dog, thanks to her character’s failings, the distinguishment is hardly for good reason. Accent: down-home Okie twang.