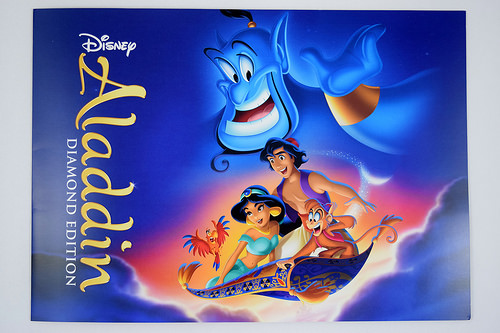 Here’s a scoop for Disney Aladdin fans. To promote the release of the Aladdin: Diamond Edition (Blue-ray/DVD/Digital), Ron Clements and John Musker, directors of The Little Mermaid, Aladdin and Hercules sat down with E! News!, answering questions and debunking myths.

Musker discussed how the location of Aladdin came to be called Agrabah – It was the time of the first Gulf War and Roy Disney told composers Howard Ashman and Alan Menken they could not place the story in Baghdad. Agrabah is an anagram.

The big theory that they did confirm involves the Genie and the peddler at the beginning of the movie. Fans have long speculated that the peddler is in fact the Genie, citing as evidence both are voiced by Robin Williams and a bit of a resemblance. “That’s true,” Clements confirmed. “That was the whole intention, originally. We even had that at the end of the movie, where he would reveal himself to be the Genie, and of course Robin did the voice of the peddler. Just through story changes and some editing, we lost the reveal at the end. So, that’s an urban legend that actually is true.”

And for those into deep Aladdin rumors, Scott Weinger, the voice of Aladdin, put to rest the rumor that he said, “Take off your clothes.” Apparently there are websites dedicated to that claim if you play the film slowly, frame by frame, you can hear it. I guess they also sit on their magic carpets and play The Beatles “Strawberry Fields Forever” backward.

For more the complete story on these rumors and more check out the E! News! article.